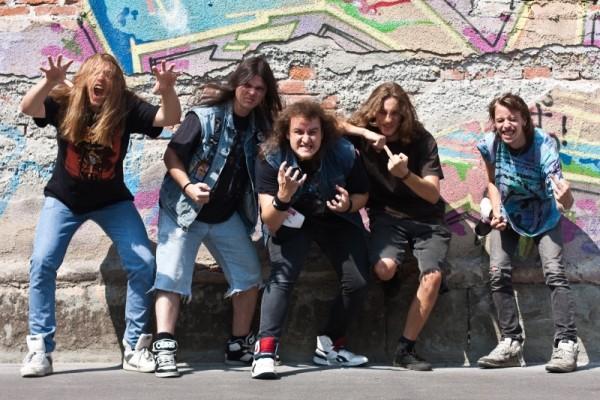 Hi Klemen, welcome on Aristocrazia Webzine. Can we have a short presentation of your band?

Klemen: Hello everyone! Well, there's five guys in the band and we all love metal. I'm Klemen, I do vocals, there's another Klemen who plays guitars, Tim on guitar, Andrej on bass and Borut on drums. The band was founded by Tim and me in late 2004 or maybe early 2005. We've had some line-up changes, did a demo, and now this is the steady Eruption line-up. Currently we're doing gigs, shooting our first video and writing new stuff so we can hit the studio again in winter.

The album you mean? We'll we wanted to end an era you know. Record the stuff we've played a thousand timesand move on to writing new stuff. We really felt that these songs were as finished as they're ever gonna be,so making an album was really necessary for us. Making a record really makes you feel like you've achived somethingin your life you know and we're all really satisfied with the album.

I have listened to your album "Lifeless Paradise" many times, I can say it's a real piece of eighties thrash metal. Which is the musical background of Eruption's members?

First of all, thank's for liking the album! We don't have any musical education, apart from our drummer who's studying jazz drums in Graz. The rest of us are all self taught, we've been in different bands and stuff. The thing that connects us all is the love for thrash metal, especially bay area stuff.

My favourite tracks are "Monumental Mind" and "Democracy" cause they are so genuine and involving. Who is the writer of the lyrics and who the composer of the music?

Those were actually the first two songs we ever wrote! I always write all the lyrics and do vocal arrangements. The music for these two songs was written mainly by Tim, he wrote all the riffs. Before Klemen and Andrej joined, Tim wrote all the music, now all three write it. Borut just adds the drumms [laugh].

There's not much to say really. I always have the vocal arrangements done first and I write the lyrics around the music. I never have any lyrics written before the song is finished. After the song is done I listen to it for some time and the lyrics just come out. Basically I just write about stuff around me and stuff from my imagination.

In the recent years, the eighties revival is a sort of vogue, are there any new wave band that you appreciate or you would like to share the stage with?

The best new wave band out there is probably Warbringer as far as thrash goes and we've shared the stage with them already [laugh]. Other than that I think new thrash bands from Europe are mostly much better than American ones. An awesome band to share the stage with would be Nevermore, they're not really a thrash band but man do they kick ass!

I think it's OK, at least here in Slovenia. Worldwide I don't know… Maybe too many ''core'' stuff and the scene kids [laugh]. But yeah, I think the scene everywhere now is kinda ok, better than let's say 10 years ago for sure.

What about your local scene? Can you suggest us some bands coming from your country?

The scene here is improving, we used to have a lot of really bad bands, but now there's quite some really good ones! If you want thrash theres Negligence, Thraw, Keller… these are all really good. We also have cool bands from other genres so I'll just give you some names: Gonoba (death), Smargroth (black), Bleeding Fist (black), Vulvathrone (grindcore), Shutdown (heavy)… So yeah, the scene's pretty good!

The metal has complied to the main stream and is becoming very fashionable, that attaint a big part of the movement but, happily, not the whole world of metal. What you erase of today metal? Are there anything you would like to come back? I mean both musically and socially.

We probably wouldn't erase anything. People can always choose not to listen to the stuff they don't like. So we don't mind shitty bands as long as nobody forces us to listen to them. I do however think that folk metal is the worst genre ever invented. What I'd like to come back is probably tape trading, we didn't experience much of that as we're too young but it's just so much more organic and real than downloading stuff from the web. And flyers for gigs drawn on a shitty piece of paper with a magic marker and copied in your dad's office [laugh].

I had the pleasure of listening to your music for the fist time through Myspace. What do you think of virtual communities and social networks?

Virtual communities and social networks are a good thing of course. They are an easy way for any band to promote themselves and keep the fans updated. And it's free so that's cool! The only bad thing is that usually only the shitty bands get noticed by big record companies [smile].

The scene in Slovenia is pretty small so the relationship with fans is very close and we like that. Having people who support you is great and we're thankful to anyone who likes us. As for the fans from abroad, we try to reply to anyone who writes.

Will we ever see you live in Italy?

You might! We've played with two Italian bands so far I think, Hyades and a band whose name I can't remember, but we played together here in Slovenia with them and Fueled By Fire. Basically if you want us in Italy contact us and we'll see what can be done!

Buy our stuff so we can get rich and start playing pop rock! Just kidding, enjoy your life and enjoy your music!