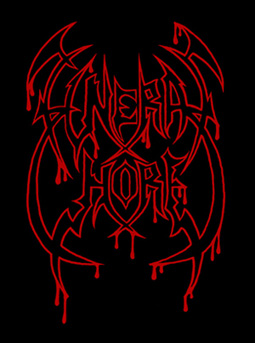 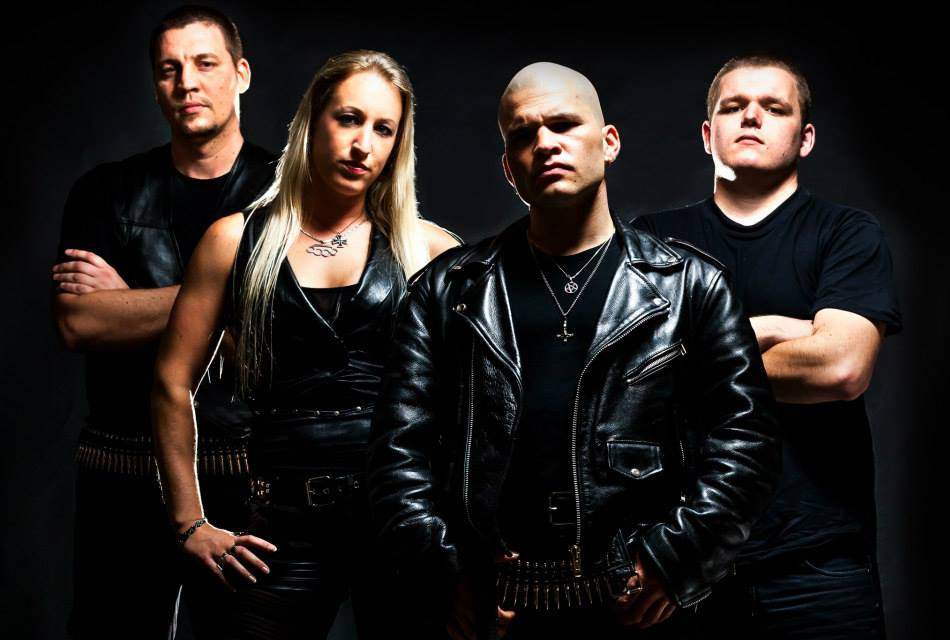 The Death Metal scene is full of young good bands, today we are with the rotten and heavy Funeral Whore.

Welcome on Aristocrazia Webzine, how are you doing?

Tim: We are doing fucking great! Awaiting our record deal proposal from Chaos Records for our first and later on, our second full length album. This label comes from Mexico. And we're just finished here with the daily rehearsal session.

Kellie: We're waiting also for our split with Profanal! It's out now! Yeah!

As usual, let's begin giving some infos on your band and its history.

Roy: Well, we have finally the perfect drummer for our band. Me, Kellie and Olle formed Funeral Whore in late 2006. Since it's existence, three drummers have tried but failed miserably. With Olle, who's in fact one of the founders of Funeral Whore, the band makes rapid progress as hell. In the very early stages of rehearsaling, Olle did one or two sessions and than quiet with it. He foccussed him self on Discharger, a streetpunk band of my brother.

Tim: But, he has returned after he heared the new composition of the band's style which made him hungry for more. We are glad with Olle and he's glad with us.

I had the pleasure of listening to "Dead Upon The Cross" and to the ep "…For All Eternity", the european sound is your main inspiration. Which are your idols, the bands which made you think about creating a death metal band?

Roy: For me, definantly Grave, Unleashed and all other Swedish old school death metal highlighters of the early '90. But also Benediction is high on my list. Not really idols but much of their material have inspired me to set up Funeral Whore. I don't hear much European sound in it to be honest.

How is playing a so old genre keeping its features and what are the main difference between the new bands and the creators of the genre?

Tim: Many of today's bands wants to make death metal as technical as possible, leaving behind the real feeling of death and brutalism. There playing only sweeps and ultra fast, technical solo's which loses all feeling in the song. It's more "look at me!".

Roy: We don't really look at features. Kellie and I like this style of death metal to play and that's the mean thing. Everybody, with the slightest understanding about osdm knows pretty damn well what sounds good and what not. As simple as that. The early creators were more raw than nowadays crap. Now, everything must be mastered at least six times, than five times reamping and than the finishing polishing of the album. Not our cup of tea…

The Netherlands is living a golden era, some bands like Asphyx returned in the scene, other bands splitted up after two great albums (Gorefest), other ones continue their work such as Sinister and God Dethroned. Is it a pleasure being in this scene, right? Do you have contacts with the great bands of your nation? How is metal supported in your country?

Roy: I think the scene here is great indeed! Many shit bands, many fake shit metalheads. That leaves us away from that crap. Old school death metal bands for instant are very rare in the Netherlands. That's cool! That's underground as we like it. It's a shit scene and it's good for us! We have less or no contact with great bands. Not needed.

Tim: First of, the crowd in Holland mostly judges on how you play. Make one mistake and your done for, when your going crazy on stage. Instead of headbanging and thrashing up the stage or the hall. Second, many people showing of with their knowledge about metal in general or how long they are in the scene.

Roy: Who gives a fuck, plug in and play old school death instead of piss and moan.

How are your days in the reharsal room? How do you create your songs?

Roy: Great! And with our label contract coming up, we are even more fanatical than ever before. Watching a good slasher movie will work on creating a song. Death and destruction are the most wanted items here with us. Most of the time I create something and Kellie makes the finishing touch on the songs.

Tim: Yeah, yeah. [laughing] Death and decay… I only drink the beer. One time, when me and Roy were rehearsing we had put on the self made shockumantary "The Great Collection Of Death". It's a bit like "Faces Of Death" but a bit more gruesome. While playing, we watched someone kicked a half dead guy in the head on the streets in a third world country.

I read on the credits of your releases that mixing and artwork are made by you too, are you satisfied with your work? I wish you to find a good label, but how much is it important to carry forward your ideas? Don't you think that the old school movement is too standardized and that there are too many clones?

Roy: Yes, I'm very pleased with my works so far. Tim did all the mixing of our material.There are bands who are indeed clones from the founders but this is often the case with bands using the Heavy Metal 1987 pedal for guitar. It's a cool sound but when everybody is going to use it, it's a bit to much lookalike with other bands such as Dismember or Entombed. We have the Metal Zone pedal and continue to use it as long as we want.

Tim: Don't forget the tuning in B!

Was 2010 a good year? How were your works received, both by fans and the critics?

The band had his ups and downs, before Olle, our fourth drummer, came back in the summer of that year. Our second drummer was replaced by some guy who was a bit worthless at all fronts. Everything stalled a bit until Olle's return. After the summer we did a couple of shows which turned out to be great. So, the year 2010 was turning out very positive after the summer. Our works, especially the promo "…For All Eternity" were very well received.

The best and the worst live experience? Do you have a festival or a gig which you enjoyed so much that you'd like to repeat?

Roy: Worst was at the Bukbuk in Heiloo 2009. Bad sound, no one headbanging, view visitors and everything went wrong what you can mention. Best show in Koblenz 2010 at the Jamclub in October of course! Never forget the supporting Profanal members and Obscure Infinity guys thrashing, moshing and headbaning. Repeat? Hell yeah!

Tim: They know how to kick some fuckin ass! [laughing] Yeah!

Kellie: That night was how it must be! It was fucking great!

You played with Profanal and Obscure Infinity, what do you think about those days? Three bands from different countries but with the same passion with old school, what do you have in common with them? How is the ambience in live shows with the underground as the protagonist?

Roy: We have very strong contact, brotherhood with Obscure Infinity and Profanal. Also we live in different countries, far away from eachother, we have daily contact about vacations and planning out gigs together. I organise gigs here in Holland and If possible, I always try to get one of the other band on stage with us. We share all the same passion for death metal. Besides that, we also carry the same spirit as comrades among eachother. Havin' a good show, good time, chilling out you name it. It is unamaginable how good our relations with eachother is. We are almost all the same, exept that we live in other countries.

Do you hate something of the modern metal scene, both in the music and in the attitude?

Roy: Yeah, almost everything. To much to mention.

Tim: Probably mostly the additude. It's all about additude, not about beer drinking and moshing.

Metal got globalized, the idea of underground adesso got deformed, social networks and mediatic overexposure of some genres (for example black), what should a band do to grow up with selling out its ass?

Tim: Be to brutal for the masses.

Your passions and hobbies? How is your everyday life?

Roy: Most of my time I spend my spare time with my girl, music, band videos productions, arranging gigs, reading books about WWII, doing some scalemodelling every now and than and when there's some time left I work on side projects or visiting friends. I also going to get myself a motorbike soon. There's to much I do and want to do while there's not enough spare time.

Kellie: In the summer I want to ride on my bike! This winter I has started to pimp my bike. I play guitar and like it to have nice gig’s and stuff with my band and see all the other guys from the other bands! Also I like to sport! And I like to drink some beer with my friends.

Which are your projects for the future?

Roy: I seriously work on Funeral Productions, a sideproject that makes live recordings in video and audio formats for death metalbands. I recorded live Severe Torture, Houwitser and Grave in the past and made the official videoclips for Profanal, Khaoz and Pleurisy.

Will you see in Italy?

Roy: This year? Probably yeah! Last summer we spend a week in Tuscany at Profanal's place in the middle of nowhere. It was super and if it's possible we'll spend a week or weekend upthere again. But first they come to Holland for a gig!

Roy: Our debut album ''Step Into Damnation'' will come out soon! Make 'em get it!

Tim: Smash you head against a cement wall, record it on tape and send it over to us. We'll contact you asap.