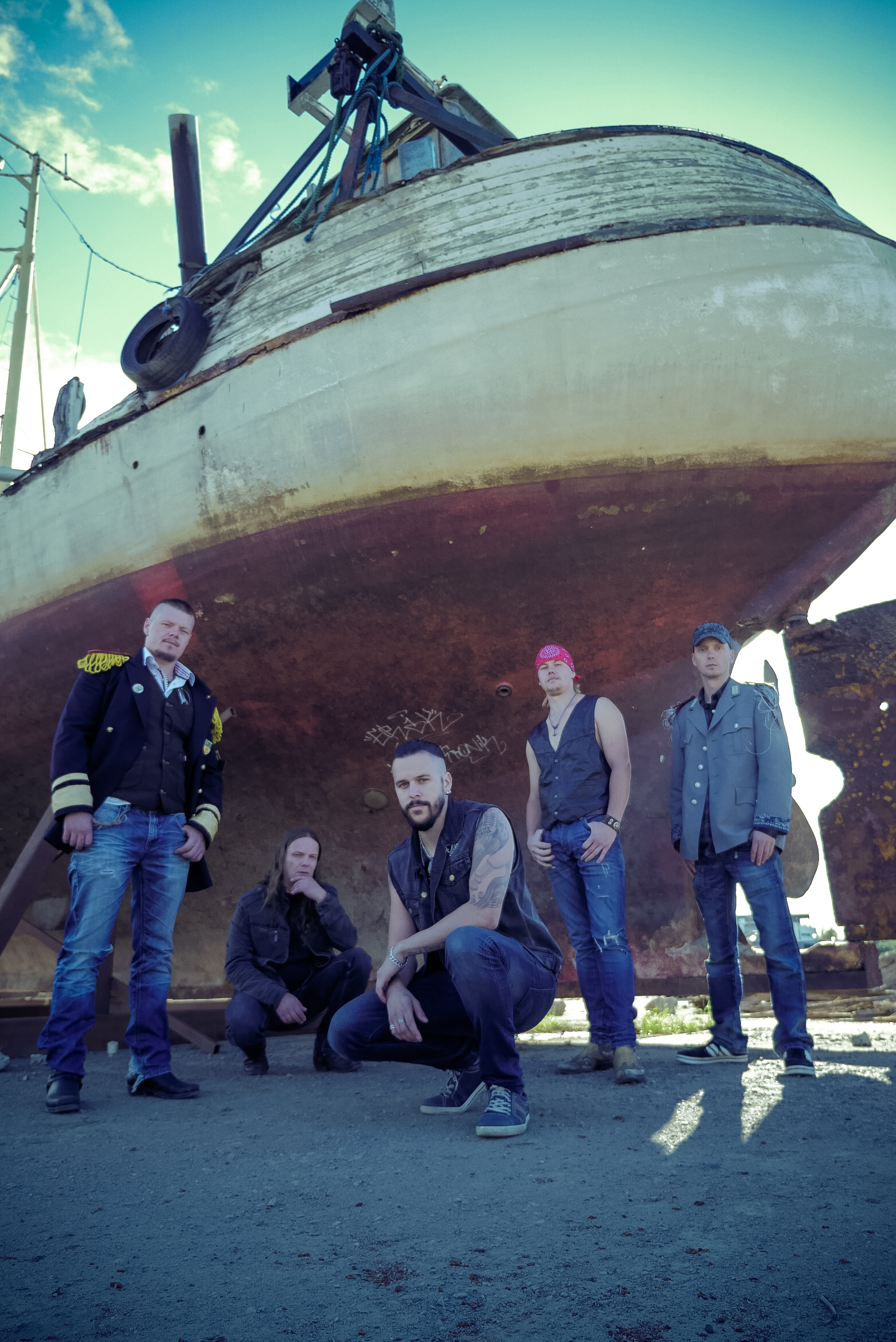 In the previous weeks we had the pleasure to host Finnish metalheads HMS Keelhaul and their first album "Anchord"; today we're here to have a chat with Markus "Maake" Lukkarila. Get ready to find out something more about this band — er, crew.

Hi guys, welcome on Aristocrazia. How are you doing? You didn't catch a cold like I did, I hope.

Maake: Ahoy to you too, good to be here! [laughs] No we didn't catch a cold, we are used to harsh conditions in the sea!

Since you're brand new on our webzine, we would like to know everything about you: how you met, how and why you decided to start your band and so on. A little bit of personal history, you know.

Well this ship started from the ashes of another band, which I (Maake), Poncco and Faabio had before. Poncco and I have been playing together since we were kids, actually Poncco teached me some first steps in guitar playing! With Poncco and Faabio we started to play my songs and we started to look for a singer and drummer. Not for long we asked for Tomi to join the band, because he was available at that time. We all knew Tomi before because we are all from the same town, Haukipudas. We rehearsed in my garage frequently and played some covers from Avenged Sevenfold, Bullet for my Valentine and such, alongside with my songs. There were couple of drummers that auditioned to us, but that did not work and we figured to asked Kimmo to join the band, he was in another band but he wanted to join us when he heard some demos that we had made and the HMS Keelhaul line up was complete. Everyone of us has known each other before. I remember when Kimmo (the oldest of us) came to jam with me and Poncco, we played Metallica and Iron Maiden covers in some basement with one amp and a lousy PA when we were kids [laughs]. I started to take guitar playing seriously when i was seventeen or so and right away I knew I wanted to write my own music and from that point on I have written music to this day and I will do it as long as I live, it is my way of expressing myself and to handle my emotions. We all share that ambition to become famous by playing to lots of people and reach people with our music. Now that our debut album "Anchord" has been released, it is blowing some serious wind to our sails. [smiles]

Maybe I should have asked this in the previous question, but I'm so curious about this topic that I decided to reserve it a place on its own: what's the story behind the name you chose for your crew? And by the way, how come you consider yourselves a pirate crew?

[laughs] A lot of people want to know what the band's name stands for, so here it is. HMS Keelhaul is a ship, operated by its devoted crew members, Maake, Tomi, Poncco, Faabio and Kimmo. The prefix "HMS" doesn't mean "His/Her Majesty's Ship", more like Heavy Metal Ship and the name is Keelhaul, which came from an old punishment/execution method where the unfortunate sailor was dragged under the ship's keel. There were very little chances to survive that. We wanted to have a nautical theme from the start because the pirates and stories from the sea have always been interesting to us and I had couple of ocean-themed songs already written, so as always when we do something, there is a big chance that things get out of hand like they did, in a good way of course. We don't necessarily consider ourselves as pirates, maybe more like independent seafarers, as we want to bring hope to people with our music, like a returning ship did long time ago. The anchor is a symbol of hope also and I wanted to use that in our logo, so I added the G clef to it, and our logo was created. It's called "Anchord" like our debut album.

You've been around as a band for almost four years and "Anchord" is your first full-length. Were there obstacles or difficulties in making this album?

Yeah, in four years we have found our style and our own sound. The recording and producing of the album and everything else took about one year, and it took one year to have the physical copy in possession too. We recorded it in my home studio (which is a pretty modest one) and we had the necessary time we needed; if one day it didn't work out, we tried it the next and so on. Of course there were some times when you just wanted to throw your guitar into a wall or crush the microphone under your boot, but most of the time it was rewarding and we found our way to work in the studio.

What are the main themes you chose to base "Anchord" on?

"Anchord" is a very versatile album and we wanted to bring our variety of music on to it. We have many kind of songs and we chose those that in our perspective fits the best with one another. The songs on the record are written by me with some lyrical assistance by Faabio, and there is a meaningful story behind every song, based on my life-experieces or Faabio's. It is an honest album and I think you can hear its intensity and ambition, especially in Tomi's vocals and our guitars.

The main music genre playing through "Anchord" is heavy metal, yet I could spot many other different influences: "Missing Piece" sounds like a ballad, the intro of the first track "Be Gone" somehow reminded me of melodic death metal, and "Arch Enemies" is the heaviest songs of all. How do you feel about these other genres, and do you like being influenced by various music styles?

Yes, we don't like to get stuck in just one sub-genre. We consider ourselves as a Rock/Metal band and to me, it is hard to divide music in genres and sub-genres, I just like to write anything that I feel like at that time and that is also a factor in our authentic and original sound.

Speaking of influences, are there any bands that inspired you all while composing and writing your album?

As the album is written by me, I think my influences are heard in composing and arrangements, I enjoy many kinds of music and it's hard to pinpoint it to any genre; for example I sometimes get shivers from a certain rhythm guitar on a metal record that goes together with the drums, or a screaming guitar solo or vocals, a melody in a pop song, violins in classical music, grooving bass in a Seventies disco song [laughs]. But since we have played mostly metal and rock songs together as a band, those genres influenced the album. I did have some songs written already and some I wrote in the making of this album, like "Be Gone" and "Fall To the Floor".

Let's take a walk out of the metal environment: what are your favourite non-metal bands or artists?

I suppose promoting "Anchord" with gigs is your main purpose right now, how would you describe the live metal scene in Finland and in your area in particular?

Yeah, promoting the album is our first priority at the moment and we hope to get a lot of gigs in the spring, go touring Europe and play in some of the summer festivals! I think metal scene is doing fine in here and in Finland all together, there are many many metal band emerging all the time and it's hard to stand out from the mass, but I think we did it! Many reviewers can't really compare us to other bands, which is a good thing.

What are your expectations for 2017? Is there already new material stored below deck?

Our mission is to grow our fleet and spread our music far and wide! Yes, we have most of the songs written already for the second album, luckily I have a lot of material to work with and you can hear also Tomi's and Poncco's music on the next album.

We're at the end of our chat, thank you very much for your time and for all the details you shared with us. Good luck for your future, have a great 2017 and I hope to see you around Helsinki anytime soon! Here, this space is yours, you can leave a message to our/your readers.

Hoourraid, crew members! Come on board with us and join the fleet! We wish you the best in 2017 and remember, music is your anchor! Yarrrr! 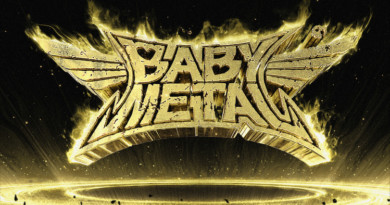 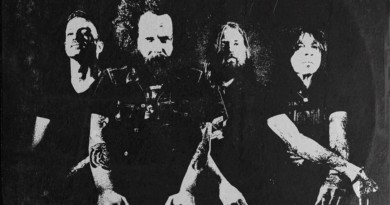