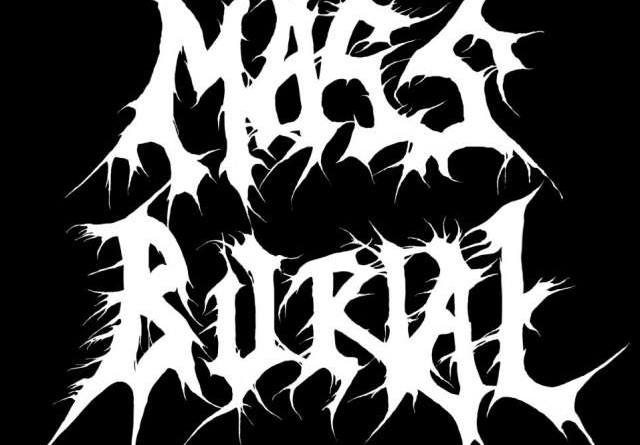 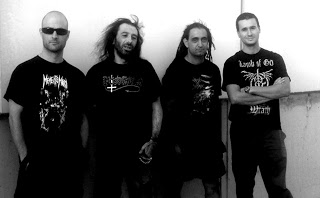 Today we talk with Mass Burial, Spanish band that have in this 2012 released the debut "Of Carrion And Pestilence".

Welcome to Aristocrazia Webzine, let's start to introducing the band and maybe telling us your story?

Raúl: Hi there guys, how are you? Mass Burial was formed in 2002 (but mainly as a project in my mind) but as a band, we could really say it started in 2009, because before that year we did some rehearsals but that was all. The we also had changes of line up and now the band is formed by: Raúl(guitar & vocals), Angel (guitar), Oscar (bass) and Jorge (drums). Well, this is Raúl who answers.

If I'm not mistaken, Mass Burial are in activity by ten years, What is not allowed you to produce anything before this "Of Pestilence Carrion And"?

As I told you, the idea came to my mind ten years ago, but I was busy with my band Mistweaver (quiet busy in those years indeed) and also the lack of musicians in our home town. It took me a couple years'till I found a drummer and the bassist in those years was my bandmate in Mistweaver, David. After some rehearsals I realize it wouldn´t work and so it was dead for two or three years. meanwhile I was writing some songs from time to time. And then, in November 2009, I could finally complete the band and a year later we recorded our first album. After the recording sessions we changed our bassist.

The album sounds like it came from the late eighties or early nineties, there's something special for you in those two decades? What had this nascent movement more than today?

Well, we dare to say the best albums of the genre were released in those years. I don't know, it was different back then. The music was honest, there were not so many manipulations from labels as today in day. The nascent movement was straight and natural, it came in a natural way. Today everything is invented.

There is so much Sweden in your sound, as well as in the sound of your countrymen Graveyard, what do you like in that way of playing? What was the first approach that you have had as listeners with this kind of death metal?

Yes, we know. It´s simple, we love this sound. We like death-metal in any kind but this is our main passion. This music is more simple than brutal- death, or tech-death but the feeling it gives you is the best, in our opinion. This is brutality through simplicity (I think this is from Bloodbath's Breeding death). Nothing could describe it best. I think when this kind of death-metal appeared, we were teenagers and it was like a shock ´cause we all came listening Metallica, Slayer, Possessed, Dark Angel, Napalm Death… but this was different.

The beauty of an album like "Of Carrion And Pestilence" is that it has no filler, straight row all in sequence without any hitch, or delays, what is your recipe to give birth to good music?

I don't know, I guess the recipe is playing the music you like. I think we play the music we like to listen and the listeners can appreciate it because it's honest.

How did the composition of the hard work done? How did the songs, your choice of the artwork and the colors for layout of the booklet and the lyrics born? Who takes care of composing them and where do you draw inspiration?

As I've told before, the idea for the band came almost ten years ago, so along these years I´ve had time enaugh to compose songs. I had all the stuff ready to be recorded when the other guys arrived. But for the next album (we have it in the oven right now ) the making of the stuff is a band's labour. It always starts with a good riff, and then the whole song comes rolling. The artwork has been drawn by Juanjo Castellano. He is a nice guy and an old death-metal lover like us, so we got in contact and it was very easy for him to do it. We wanted the essence of the old days , so we decided to do it in black and white and the whole thing couln't be better.

Among the criticisms I hear most often done to death metal is to be a continuous repetition of cliches, especially about the thematic approach. We are so surrounded by deathly events and tragic situations that we are addicted to it?

Yes, we know. We usually read reviews from bands like ours and many people say that it's always the same, a copy of Entombed, Dismember… Fuck off. We don't care about that. It's simple, if you like it go and grap the Cd, if you don't, you have tons of bands to follow but please, leave us alone. I think many of these reviews come from the envy and frustration of the reviewer, who always wanted to play in a band like this but he's never been able of doing it. Cand you imagine a death-metal band writing about love?? hehehee, no, if that would happen, then it should ne love-metal. As it's death-metal, we need to talk about death. That's all I can say.

What is death metal for you? What it means and why you choose to go along this path in music?

Death metal is my life. I am an open mind and listen to many styles, I like Iron Maiden, Napalm Death, Slayer, celtic music… but death metal is my favourite one, in any slope. I think we could have chosen to play Pop or something similar, and probably now we could be rich and famous, but we chose the difficult way, and that's why we are playing this.

The Spanish scene as the Italic one are in constant turmoil, but in some cases both nations are taken slightly underestimated compared to those established as U.S.A., Sweden, Finland, Holland, Germany and France, is it just my impression or is still a disrespectful attitude towards some scenes? As if there were first and second series?

Yes, you are right. This comes from people's mentality. I mean, in those countries you've mentioned, children can study (and actually do it) music from their first years in the school. So the whole nation has a musical knowledge and so they respect it, indepently if they like that genre or not. But in our countries music is not something important in people's lives. And then the radios and tv programs suck. They only play pop and latin music, so what can we expect?? As a consequence from that, when people see a band playing the same style coming from Sweden and other one coming from Italy or Spain, they prefer the Swedish one because they know ther's a guaranteed quallity, though sometimes it's not thus.

How have you incorporated into your national scene? Are you in contact with other acts? What you consider to be the best examples of metal in Spain today?

We have just released our first album six weeks ago, so now we are being known, but we get good messages on facebook and people writing to our mails, so I think the feedback is being good. We still don't have contact with bands (for Mass Burial) because we've been in the scene for almost fifteen years and we know a lot of bands from our other bands. The best examples of metal could be our other bands like Mistweaver, Authority Crisis, apart from this, Graveyard are good, Haemorrhage.

The disc was released for the label of Robert, the Wydawnictwo Muzyczne Psycho, as you get in touch with them? How do you think important is the work of these fans?

Yes, when we fisnished the album I started to look for a label and I saw some of my Cds in this gender. I had Intestinal and so I discovered Psycho. I sent them four songs and Robert was really interested so this was all we needed. Of course, we sent to other labels at the same time but it was easy. Robert likes this kind of music and he is doing his best, so we do appreciate it and the cooperation is being cool so far.

In the previous question I talked about fans, in your opinion in the smaller labels the passion is the factor that promotes a constant quality in producing music? In the biggest labels like Nuclear Blast, Earache, Metal Blade and Relapse are lost sight of what they want as listeners and focusing only on marketing?

Of course, those labels are just business, and all they want is to earn as much as possible. They don't even know their bands, probably they won't even like some of the styles they run, but money is what they want. I guess people like Robert will be losing money with this and they will have another job out of the music but their dedication is terrible.

There's something in the death metal world that you want to eliminate because you think it superfluous or incorporated into it without having the proper title?

I'd like to eradicate the trues, I mean, all these people continiously writing in forums telling they have been listening to death-metal for 25 years and they like Entombed, Grave, but they don't like Mass Burial or Graveyard because they prefer the original, and the rest are just clonning. As I've told before, nobody's puting a gun in your head for you to buy this music, so if you don't like it, go and buy another band, there are thousands.

How are you promoting "Of Carrion And Pestilence"?

We are staring to play live. We played at a little fest in November and now we need more gigs over here to spread our music. Of course if someone wants Mass Burial in Italy, just get in contact with us.

When was the last time you played live? Feelings about the evening?

The last time for Mass Burial was in february 25th and it was killer, not many people, only about fifty but it was cool. people didn't know us but in the end we made them bang their heads.

There is a festival at which you absolutely would like to participate?

Only one? There are many festivals like Obscene Extreme, Mountains Of Death, Deathfest, Maryland Deathfest, Wacken.

There are planned dates? Maybe a passage here in Italy?

In a month we will play a release party in our own town and then we will see if we are called to play out there. As I've told you, we'd like to go to Italy. Please, arrange something for us.

Nerd corner: what are your passions outside metal?

Travelling, mountain-bike, drinking beer, going out with my girlfriend, doing nothing.

What are the dreams that Mass Burial would realize as a band?

I guess that if we could do some tours, playing some of those festivals, recording albums 'till we think it´s enaugh, that would be great.

Let's give five reasons for which our readers should grab a copy of "Of Carrion And Pestilence And".

If I tell to you "woman and death metal", what is your answer and why?

The interview is over, I leave you again the word for a last thought to close our natter.

Thank you very much for this cool and extended interview. I hope some readers can know about Mass Burial thanks to this chance. Thanks and write us at solobscurabitur[at]hotmail.com or sinergiacrust[at]yahoo.es for any inquirees.