Hi Loic, welcome to Aristocrazia Webzine. May we have a short presentation of your band?

L.F.: Hi. I created N.K.V.D in 2005, I recorded a demo called “Vrajda” never released, and in 2007 a mcd called “Diktatura” released through Those Opposed Records.

I played in a few bands before, I had the idea of what i wanted, and I fastly understood that the only way to achieve my goal was to create my own studio band. As I didn’t wanted to waste my time with non motivated people, and because of the fact that I hardly found good musicians, I decided to do all by my own, writing stuff, playing and recording it.

Why did you choose to play industrial black metal? What has made you think: this is what I want to play?

I exactly had the idea of what I wanted, the only problem was how to achieve this goal, it was only a matter of how doing it.

That is true that we have in France a lot of good industrial bands. The most important one is Ad Hominem I think, even is they are more black metal oriented, I consider them as an industrial band.

As I rarely go to gigs, and have no real relations with the metal scene, I am not aware of today scene. I am a little bit “tacky” and spend my time listening to old bands. But I find sometimes new things that are not bad all.

How do you write a song? Can you tell us something about the lyrics of your songs, i find it very peculiars?

I don’t spend time searching for something. Ideas, concerning music or lyrics come by themselves. But I spend a lot of time recording and arranging in order to make the songs sound the best possible, and the nearest that I have in my mind.

How is important for you the connection Regime-Music?

I am only inspired by true thing that happened, historical things like politics, war, people. I have a big interest in people’s life, what they done in their life, how and why. And I write songs about that.

Can tell me your influences (I have heard Diabolicum sound into “Diktatura”, for cinism and approach to the apocalyptyc music) in music and ideologic?

The thing is, when I created N.K.V.D, i was away from metal for some years. There was a lot of industrial band that I didn’t knew. My inspirations were more oriented toward bands like Type O Negative, Morbid Angel, Immortal, Laibach than industrial metal bands. When i created N.K.V.D, I wanted to do my own thing, with a sound like no other one, I didn’t wanted to create a project which sound like the two hundredth Mayhem or Marduk band.

Four years after recording it, I am still proud of “Diktatura”. Of course there are some mistakes in it, I am not a studio engineer, and I learned a lot of things until, but the brutality, the rawness and the quintessence of N.K.V.D were there. Concerning dictatures, I found them fascinating by their aspects. What make a man want to rule a country, to be the master of people? What make a man kill, betray to have power? But I am not a dictature supporter, I really don’t want to live in it. Freedom and equality have no price.

The mcd “Diktatura” is out from 2007, the next “Vlast” is coming soon, can you say us same news about? What changes can we wait in the future?

“Vlast” brings new ideas, and I made it sound more precisely than “Diktatura”, but with the same agression. “Vlast” contains eight songs, two are rerecorded from “Diktatura”. I will record new N.K.V.D ‘s stuff in the future, I am still inspirated.

What are you doing to prepare the release and the promotion of the album?

My label handles it.

My vision of N.K.V.D. is an artillery ever ready, clean and shining grey, a real machine gun; what do you think about your project?

I wanted N.K.V.D. to sound brutal, cold, dark and loud. But i wanted the brutality to come out the guitars and arrangements, because it is really easy to make a project sounds brutal only by drums.

What can you tell us about your life outside N.K.V.D.?

I do a lot fo sports, I am a big fan of muay thai, kickboxing and weightlifting. I have a very normal life, exept my job, which is not that normal…

Can you tell us the best and the worst experience you lived with N.K.V.D.?

Worst was a Portugese label which released “Diktatura” through tapes, without even sending one to me. The best is the rest.

This project is only in studio or we can see you on stage?

Only studio, I am not a big fan of gigs. But, maybe one I’ll play live.

Very good, I can’t say that I have a lot of supporters because I only released a mcd at the moment, but I can say that some people are following N.K.V.D. since its creation.

Thank you for your interview, I hope you won’t be deceived by “Vlast”. And may Peter Steele rest in peace! 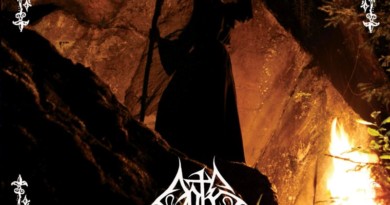