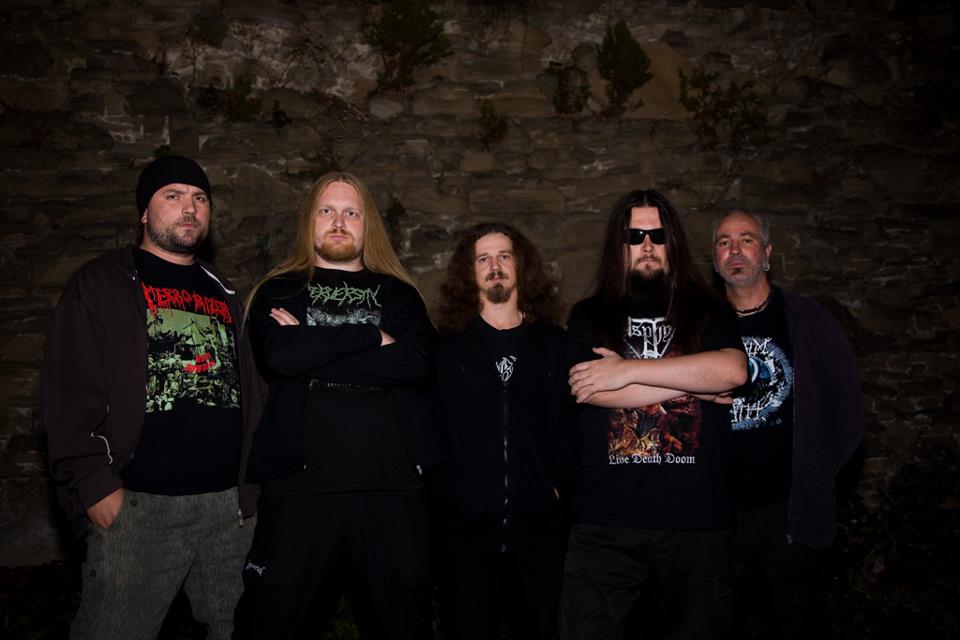 They have been active since the end of the nineties the Slovaks Perversity, death metal band that with "Ablaze" has added the fourth full-length seal to their discography.

How are you, guys? Welcome to our site, has this summer been prolific?

Jozef "Dodi" Kosc: Hi, man! Thank you for your interest in our band. This is our first interview about the album "Ablaze" for a foreign magazine. Yeah! So, we are fine. Now we are full of expectations of the reactions on our new CD. We were prolific in spring. We were working in the studio and then we were looking for a new label. In summer we relaxed and played on a couple of fests.

You have been active for almost fifteen years, how is to have spent a long time within the metal scene? What motivates you to write more of a healthy death metal?

Death metal is like air for my life. Most of all I like making songs, creating darkness, melodies and expressing my feelings. It is simply like energy to my life. That is why I cannot give up and I have been active for sixteen years.

The formation has had over the years many changes in line-up, what causes this tendency? It's so hard to maintain a stable project?

More guys went to work abroad, that was the most frequent reason for leaving the band. Of course, some of them did not feel like playing. It was difficult to solve personal changes. On the other hand, I had a new motivation to continue.

"Ablaze" is a well-made mixture of Floridian and European school, what is your musical background?

That mixture you mention is spontaneous. It is simply from the heart and that is no cliché. I personally was brought up on bands like Immolation, Morbid Angel, Sinister, Diabolic, Grave, Bolt Thrower. There are a lot of them.

You alternate direct and straightforward blows, with other songs with a more accurate rate technique, I think of "Merciless Messiah" and "Palace Of Skin". How you have changed the way of composing over the years? There are firm points of reference or the choices made are the result of a community of purpose?

I try not to lose melodies. We were more technical on our first two albums. Now it is more about atmosphere and darkness. At home I make some guitar links and then we play them on in our rehearsal room. It is a gradual process and the song changes every time we meet. It is an interesting work.

Who takes care of the part related to the lyrics? Many people believe that this aspect can be taken lightly because it now represented a heap of cliches endlessly repeated, is a criticism that you feel motivated? From your hand, what are the issues you face and how you facing it?

The lyrics on the album "Ablaze" were written by our vocalist Juraj. For me it is important that music and text form one unit. Recently his texts have brought me new ideas. I read the text, closed my eyes and the guitar links just appeared. We are not a satanic band. We prefer an artistic view of darkness, heresy, death and psychological status of various personalities. Of course, someone can consider it to be "cliché". For fans the music may be more important. But some texts must also be there. [laugh]

The Slovaks death scene has offered discrete reality, I think of underestimated Dementor, God Defamer, Sanatorium and Surgical Dissection. You live in a part of Europe that has the very big extreme push coming mainly from Poland, what has not your scene? Lacks the support of the label or what?

Poland is a big country. I think that the fans support their bands more. In Slovakia there are also some high quality bands. Some of them have been playing for almost twenty years: Pathology Stench, Depresy, Contempt, Nomenmortis, Lunatic Gods, Phantasma. We are the second wave as well as Craniotomy, Typhoid, Pyopoesy, Suburban Terrorist or Infer. And them the new bands like Attack Of Rage, Diftery, Ancestral Volkhves, Doomas, Killchain or Brute. Slovakia is a small country, one metal magazine, a couple of webzines and maybe three metal portals. There are also a couple of labels here, Metal Age, Forensick, Hrom, Gothoom. I recommend to look at the Slovak scene.

If you were to recommend five fundamental discs released exclusively by Slovak band on what would fall back your choice?

Returning to "Ablaze", I have particularly appreciated the brief atmospheric intrusion included in the intro "Reach Of Hell" and in "Necrophiliac Beast". It seems to me that, in the last decade more than ever, on face a lot of attention to the atmospheric side or is it just my impression?

The intros are very fine. Since the debut we have cooperated with the keyboards player Mr. Helmeczy. In fact, he is a versatile artist, a guitarist, lyrics writer and a bit a writer. His writing is peculiar, dark and original. It absolutely goes with our songs. It is cool! In the future we will certainly use his abilities.

You are in front of an experienced listener of old school death metal and of a young novice, having to present at the best the album to both, what tracks would you make listen to them?

"Behind The Diabolical", "Hailing The Thieves Of Souls" and "Blood Of Hastur" are pretty old school, I think. "Devoted To Perdition" and "The Banished" have a bit more modern approach. In "Merciless Messiah" and "Necrophiliac Beast" you can find some technical parts and more aggression. I think all the songs are diverse and the listeners should not be disappointed. I hope. [laugh]

You have entered in the young roster of Jan's Lavadome, as you get in touch with him? He is a person who works a lot, I noticed it with Brutally Deceased and confirmed with your album. In these terms, how important is the passion and instinct for entrust to someone your work?

Jan is my old friend. He contacted me in 1997 when we made our first demo MC. He contributed to the fanzines Terra Aegra and Transcend666. At that time we sent letters to each other by post and "talked" about music. So far we have met only twice. He is absolutely super and Lavadome is at last the right label for us. We can trust each other and solve everything gradually. It is simply cool! When he released Brutally Deceased, I expected how the label will develop. On the other hand, he was expecting our new album whether it would not be a failure. Hehe. Perversity + Lavadome = natural development. We are really satisfied.

As has changed the metal world since you started playing and listening up to now? What are the components that you miss most of the past and which they consider useful in the scene today?

It is just my subjective opinion but I do not like the new deathcore or metalcore bands: terrible names of bands, funny hairstyles and tattoos. Really funny! But I don't care. I just don't listen to it. In fact I don't miss anything. I always find something I need. It is fine I can listen to old cult bands and remember old good times. Nostalgy. [laugh]

In the last period, many labels have withdrawn their albums from the download and streaming site Spotify, you believe there may be a reversal of direction for the return of the healthy and essential physical purchase or is it just a matter of income too low of the platform?

This is not a familiar topic for me but I think streaming is ok. Lavadome went this way. We will see what it brings. We are curious.

Have you already bring on stage the new songs? As has been perform "Ablaze" in live?

We have played all the songs live. We are planning to add the intros to the gigs. Most of all we like playing the songs from "Ablaze". I personally prefer shorter songs. Live they are even shorter. [laugh]

What is the best memory you have of a festival or of a single concert? There were negative experiences that you remember now with a smile?

This summer we played at Gothoom Fest near a lake. It was a recreation area. Bathing, sun, beer and a lot of acguaintances and fans. It was super! And the worst experience? Maybe, when I pulled the wrong cable and with a huge bang fell the expansive keyboards. The people applauded loudly. I came out in a cold sweat. The owner of the keyboards started to throw his arms about and stress out.

In metal now is a trend the formula "pay and then sound", practically bands who pay their position in the gigs avoiding the mess tin and focusing often at undeserved positions at the expense of those who have broke his ass for years. It's something you have heard or it never happened to you to receive similar squalid offers?

We have never paid anything. At present everything is just about business and friendship is getting lost. That's a pity. If you want to play, you must contact the organizators, but to truckle somebody-no! We would solve it according to the offer.

Although playing live in Italy is becoming almost a heroic endeavor, you think we can see you in our area?

Italy must be super! Pizza and good football. Hehe. And even Vatican. [laugh] I hope once we will get there. Send our contact to an agency in your country. Maybe this interview will also be interesting for someone.

Who are Perversity once undressed the musician clothes, what is your life outside the band?

I am married and have two children. So it must be clear who I devote myself to. Perversity is a hobby for me to work off and charge the batteries.

The time is expired, it was a nice conversation, only remains to send a final message to our readers, I leave you the word.

Thank you for your time and the interview. I greet all death metal maniacs! You can leave the message at our website. Death metal eternal! 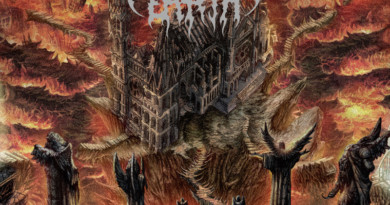 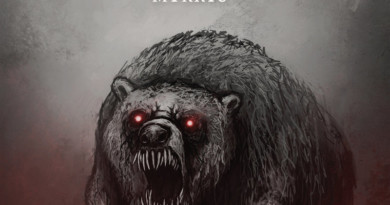