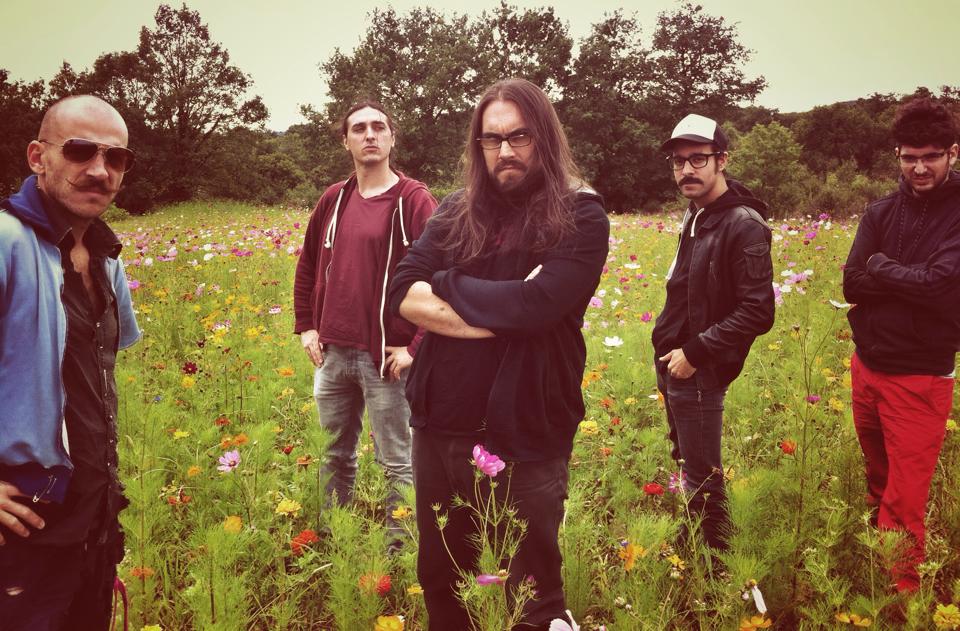 An interview with a bunch of musicians obsessed with cats and videogames sounds pretty interesting, doesn't it? Ladies, gentlemen and feline friends, please welcome Pryapisme on your favorite webzine.

Thank you for bringing the 8-bit Catpocalypse here on Aristocrazia Webzine. How are things going?

Hello to you! Things are going pretty well for us. The game for which we composed the original soundtrack is about to be released, and we are really looking forward to see the reaction of the players. On our side, we're working to adapt some of these tracks for our future live shows and it's quite challenging.

Let's start by introducing your band. How would you describe Pryapisme in your own words?

It's always hard to try to describe our music. We use to say that we play Rococo-core because: it doesn't really make sense; our tracks are maybe overloaded; that's pretty graphic; it's funny, and we are jokers; «electro-metal-jazz-disco-folk-classical-chiptune-heavy-dubstep-speedgabber-balkan-bluegrass» is maybe a bit too long; we didn't find any better definition yet. However, Lolcats-core also works for me for the same reasons — except for the second one, because cats are not especially overloaded, except if you put random stuffs on them, like a water tank or a very big potato… The main ideas behind the band are: no boundaries, no censorship, we play what we like (and we like a lot of different musics). I guess Pryapisme is some kind of a genre-blending band, with an important electro and metal background. It's also mostly instrumental. We are five instrumentalists but we often use guests and a lot of virtual instruments to expand the tones of our music. We're also joyful, we like pets, we eat pizzas. Some of us even have a Netflix account… We are normal guys… Like your charming neighbor from upstairs but without the weird collection of enucleated puppet heads in the attic.

How did you end up working on the soundtrack for an indie videogame?

We wanted to work on videogames for a long time and we are so happy to had the opportunity to work on "Epic Loon". The lead developer from Macrales studio contacted us at the end of 2016 when we were working at the final steps of our third album. The crew from Macrales already had in mind to use Pryapisme for the music at the very beginning of the game development. I guess they simply enjoyed our past albums but they thought we might not be interested in this kind of commissioned work. In the past, we did the music for a documentary about videogame but that's not really the same approach. Macrales contacted us anyway, like a bottle in the sea. For us, it was a dream that came true! Soon, we met and tried an early version of the game, to see if it could fit to our realm and we quickly accepted the challenge.

Your music has always been a (beautiful) mess and the OST for "Epic Loon" is surely no less crazy. How did you combine your musical madness with the videogame scenes?

The fault is actually on Macrales! They gave us carte blanche, and that's something that no one with a healthy mind should do. Therefore, regrettably, we were completely free. At first, we wanted to write a traditional soundtrack. In any case, not a too messy or too frantic one. But they insisted on the fact that they were confident and they told us «Do Pryapisme music!». They really put their trust in us. Luckily, the gameplay have this kind of random, funny and messy aspects. We tried to keep that in mind but it naturally fitted with our regular compositions. The main challenge was to reflect the visual scenes for the different levels, and we did this like we would have done it for a movie soundtrack, by putting cinematographic references in our music: traditional eastern winds for a level in Japan, dark piano parts for a vampire's castle, etc… We just sprinkled those visual musics with modern and catchy elements to fit the nervousness of the gameplay. It's more or less what we usually do on our regular albums anyway. The only difference is that we had a storyboard to follow, length times to respect and we had to compose loops instead of normal songs. Moreover, the OST is a bit reworked compared to the tracks within the game.

Putting "Epic Loon" aside, I've always felt strong videogame hints in your albums, starting from the 8-bit stuff and going through some small details here and there, not to mention the atmosphere of the songs. So which are your favorite videogames?

Yes, we all were born within the Eighties so we were fed with videogames since our childhood. It's a great part of us. Beside playing, videogame soundtracks are also a great musical inspiration. It had a huge impact on our musical learning. We are in love with 8-bit sounds so we frequently put it in our compositions. It's hard to tell you what are our favorite videogames, because there are so many! We all have different tastes so I can't speak for all the band members but I can do a few personal choices: "Castlevania", the very first "Resident Evil", "Burnout Revenge", "Suikoden" 1 and 2 and of course "Duck Hunt"! More recently, I have to mention "The Witcher III" and a special one, "The Last Guardian", because of the animal which looks like a big winged-cat. I want the same on my sofa. But, that being said, if I have to pick only one, it would be "Megaman 2" / "Rockman 2" on NES. I spend so many hours on this game, and the musics are just tremendous.

Pryapisme's music seems to draw from a lot of stuff, probably not only videogames and (several) music genres. Where do you draw inspiration from?

Obviously other musical artists are still the main inspiration storage tank for us. Ideas may sometimes come from books or just random discussions, but it's most of the time visual or graphic foundations: movies we saw, places we've been to, random internet videos or even only a picture. Music from Pryapisme is meant to be an OST for itself. A track is like an act of a film, each break can be seen as a changing scene, new instruments bring another sequence, harmonies and melodies bring the psychology of the characters… but the visual must be imagined by the listener. Sometimes we want it to be a comedy, sometimes it's a horror movie, sometimes it's a just a scene in a giant nightclub with cats meowing on the dancefloor. It can be stupid as that.

What kind of music do you listen to? Judging from your songs, I guess you have pretty varied tastes; at least, you don't seem the kind of guys who would listen to Manowar 24/7.

[laughs] No, indeed, we are not Manowar nerds! We all listen to almost every music style, we are pretty open-minded. There are good stuffs in every genre. Even things that are not our cup of tea can be travesty, mixed or transformed into another style to find something new. We are a bit mischievous sometimes: we like to put a clear musical reference in a totally different context or environment. The result can be surprising, unsettling or just funny, but it's important to listen all music possible to find new ideas. Anyway, if I must answer to «what kind of music do you listen to?», I'm forced to tell you that we listen almost everything, from traditional Balkan brass band folk to extreme black metal, from ultra digital dubstep to baroque, from industrial noise to the Eurovision sound contest artists.

Judging from some videos, your live shows seem totally fun and I was actually impressed at how you can bring your music on stage. Is there any chance to see you in Italy?

We would love to! But we don't have any touring agency to help us yet, so it is really complicated. We know more or less how to play stuffs on instruments but finding shows is definitely not our job. If we could, we would play anywhere! It's super fun for us to play live with Pryapisme, it can be challenging because of the complexity of the song structures but it's a real pleasure to share our mood and our jokes with the audience. It's definitely our goal to play more in the future.

Let's say that with the advent of the Cat Era humanity will not be able to listen to their music, because our diabolical feline masters don't really like it. However, they are so merciful that they let us keep five albums. Which ones would you choose and why? [editorial's note: he actually chose six albums…]

It's quite a personal question and i can only speak for myself. I'm sure that the rest of the band members would have chosen differently. It's hard to pick only five albums, and if you ask the same question tomorrow, I'm sure it will be different but for today, here it is:

I just noticed that four of the five albums come from Norway. It's a trick.

Ok, now the most important question: why are you so obsessed with cats? I mean, I'm not one to talk since I love anime catgirls, but I guess that's not the same for you.

Since the beginning of the band in 2000, we use to rehearse at my mom's cattery. So cats are really part of the band. They live with us, they stay on our legs when we make a break, they drink coffee with us, they even used to piss on our bassdrums and amplifiers (not anymore — it's now thankfully secured!). And we love cats, that's simple as that. When we compose or mix in front of a computer, there is always a cat nearby. Sometimes he meows in front of the microphone, or he hides the screen to annoy us. He can also write mails or respond to interviews: «hjkfhjkvfh::::!sqbfjkljkf fdkfvfdhvjfkdvb456('é"èàç_ pma" tgraéfr»; that last sentence was my cat's answer.

Finally, our special question: if you were to describe your music to a ninety years old guy, what would you tell him?

I would say that we do tea dance music but with more hair.

Thank you for your time, I guess that's all. If you want to say anything to our readers, now it's the time.

Thank you and thanks to the readers. Be sure to try the game "Epic Loon" when it will be released (the 13th of July on Steam, Xbox One and Switch and a few month later on PS4). Also don't forget to feed and cuddle the cats, otherwise you may rot in the seventh circle of hell for eternity. We have been warned! 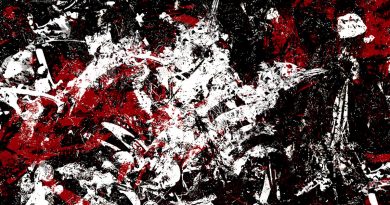