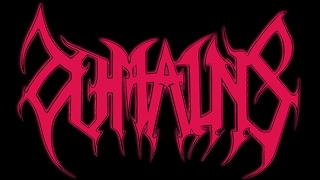 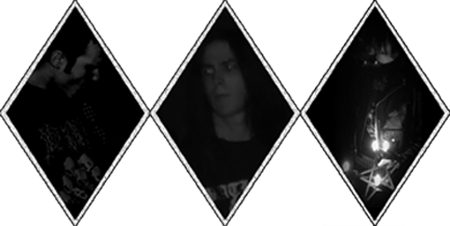 Domains is a Spanish trio that left a clear mark of its passage in my stereo, thanks to their debut "Sinister Ceremonies". I have thus welcomed the chance of having a chat with them, so that I could get to know the band better.

Hello guys and welcome to our website, how are you doing?

Ave Gabriele! We are doing really well, as I am writing this our debut album "Sinister Ceremonies" was released four months ago, we are absolutely satisfied with the results, currently we are working on the LP version of it, which is going to be absolutely killer.

Let’s spend a few words about Domains, how was the band formed, where does the name come from?

I guess that our formation process was very much like on the other bands, we were in the end of our teenager days, and we felt that we needed a serious project to satiate the impulse to enter the realms of this art. Both Franc and me were playing on other meaningless bands before, these were driven by useless ideas we didn't felt comfortable with, that made us took the decision of creating an entity of our own, then place its foundations outside of the typical standards of the rock and roll circus. As strange as it sounds, the name came from pure inspiration, we discarded many others before, but when we heard Domains for the first time, we felt that it fit perfectly. Domains of the endless…

What was the musical encounter that opened your way and brought you where you are now? I mean both the artist and the album, and possibly some texts that helped shape your ideas.

My first contact with Metal music came with Metallica's "Ride The Lightning", then Slayer, Megadeth, Sepultura, Bathory, Kreator, Sodom, Morbid Angel, Mayhem came subsequently, the readers can imagine the rest. Albums like "Dark Recollections", "De Mysteriis Dom Sathanas", "Blessed Are The Sick", "Hell Awaits" or "Exterminate" (among many outside of the Metal spectrum) were crucial in our development as musicians. To quote one among the many occult literature that deeply influenced us, definitively, the works of Eliphas Lévi.

Your album "Sinister Ceremonies" pleasantly smells like old times, it is a creature that seems to be coming straight out of the late Eighties-early Nineties. What was it like to create it? What was your first thought after finishing it?

It took many years of sacrifice and overcoming many obstacles, but it has been made the way we wanted, in sound, concept and visuals, that's what really matters. We are really proud of it. I instantly felt that I bleed part of my spirit in this opus, so that it will last even after my bones rot in this scorched earth. The essence of the creation always lasts more than its creator.

I was really impressed by the ease with which black seeps into the tracks, each song works as a ritual that foreshadows a more macabre or violent development in the next episode. What are the core concepts, or the convictions, that inspire this dark lump of notes?

Brilliance, difference, pushing all that is mediocre down into the abyss, secrecy in thoughts, defying time and standards, absolutism of death, culling, the endless ritual in which we live, embraced by the acausal, our gaze to a sulphur cosmos.

Speaking of influences, we can say that Domains drew some from both the US and the European scenes; at present, thirty years after the death metal movement and more than twenty after Scandinavian black metal, what would you say are their pillars?

Going deeper than naming this or that band, we see something that the dark extreme metal scene had on its first years, (regardless of the geographical area). There was this search for personality and originality, with the aim of sounding dark and evil, something that was but a pure translation into art of a relentless impulse – a very sinister one by the way – that phenomenon grew unstoppable, overcoming everything that surrounded it. We observe that in Bathory or Slayer, Mayhem or in Morbid Angel, Beherit or Angelcorpse, Necromantia or Immolation… It is simply there.

While reading many articles around the internet, I have noticed that your potential has often underestimated, because of the fact that your style is too reminiscent of Morbid Angel's style. Don’t you think sometimes the critics pay too much attention to who was there before, with the result of not giving much credit to newer releases, "guilty" of having been released in 2014 instead of 1989?

Sincerely, we don't see the amount of success or acceptation as a matter of relevance, that is subjected to changes on a very ephemeral way. Quality releases simply transcend years and comparisons, if we get more or less praise, that’s a circumstance, nothing more, I can assure you that it is far from being connected to our main goals. I must add that albeit it is true that Morbid Angel is the act to which we are mostly compared, it is not the only band, one very common impression we receive is that even you can see some clear influences from many bands here and there, freshness and personality are very present.

How did you get in contact with the emerging label Sinister Flames? Can you tell us something about this project and the fanzine related to it?

I first got in contact with Mr Northwind through the aforementioned publication, The Sinister Flame. Then back in 2009, when we released our first demo/Mcd entitled "Towards Pleroma", I sent it to Mr Northwind with the purpose of a very personal review, and he just saw the potential in us. Aside from that we continued with our contact exchanging impressions about our vision on Black and Death Metal, when the moment for us to record the album arrived, he took a firm step forwards and offered us being on his new label that would share the core concept and name of The Sinister Flame. We took the offer immediately, as we think the criteria and procedure of the person behind it is simply perfect for us. I must add that we feel extremely proud to be part of a label whose vision goes far beyond materialism, where quality and spirituality are the main pillars. The Sinister Flame, as a publication, is the continuation of the highly influential Satanic Metal zine "I Came From Darkness / I Return To Darkness", it was started in the early '90s and follows as The Sinister Flame since the year 2004. Nowadays it is also a label, from which you can expect quality over quantity, believe me, the future holds great things for this firm….

In another interview, NocturN stated: «black metal is not for stupid kids who get bored on a Saturday afternoon and decide to take some pictures with corpse painting, chains and studded bracelets, then turn on a drum machine, put some guitar and distorted voice on it with "Satan's Blood" style lyrics. That is not black metal! That is just a bored person with a lot of free time, an absence of talent trying to get some attention». Here I ask you: how much there still is of "real" and "felt" in the extreme metal world?

Great words, indeed, with the passing of time so many things are revealed… Seems that there isn't too much left of the adjectives you pointed in the extreme metal, maybe I'm wrong, but if we pay attention to the prodigious quantity of talentless crap that is signed and released, we can say that seriousness and devotion (notable signs of genuiness) are very scarce. Notwithstanding the above, excluding the general vision, of course there are still many individuals doing the right thing.

If you had to make a list of the ten most important death metal tracks, what would you choose? What if you had to include one of your songs, which one and why?

I'm afraid this is a very difficult task, even more if we take into account that the boundaries between what is often considered as black or death Metal are very debatable. Simply, there are too many to reduce them in a top ten list, and what's most important, great songs usually tend to fit perfectly in their context, among other tracks to conform the masterpieces we know. Personally, I can't choose one of our songs to be upon others, we compose avoiding filler, we usually throw any idea of which we have the slightest suspicion of being sub-par. So, at least for us, all tracks share the same standard of quality.

Will Domains perform live? Do you already have ideas about it?

Definitively, yes. As an example I will say that while I answer this interview, we are preparing our concert with Mystifier, which is going to take place in Madrid on the 26 of April, also, more live appearances are being arranged, both in Spain and in other countries. Our idea of shows is very far from Rock and Roll revels, we want them to be just dark and merciless black-death Metal offerings.

Will you keep the trio line-up on those occasions, or you will look for another guitarist?

Right now, we are rehearsing with another guitarist to perform live as a session member, to be honest, we can both do well as a trio line-up or with two guitarists, depending on the circumstances, but yes, if its possible, we will perform as a four piece act.

What are your future projects? Have you already started working on new materials?

Our next goal, aside from live appearances, is to compose our next full length of Luciferian black death Metal, which has to be as good as "Sinister Ceremonies", or even better, on the contrary, it will not be released. We will go deeper with our lyrical concept and our style. No boundaries. Right now, apart from very few glimpses, we have not started to work on new material yet, but we will for sure in the upcoming months.

What are your targets?

To follow our path with no external influences, continue releasing more Sinister art of quality, which is, by the way, some of the best possible testament we see our blood can leave in this world, all of this, of course, within the parameters of evolution and improvement.

Can we invite our readers to listen to "Sinister Ceremonies"?

With its aura, freshness and vehemence, an abyss is traced between "Sinister Ceremonies" and the mundane values of mankind, which are questioned and beyond. Enter it, now.

Here our time is up, I'll let you close the interview as you please…

Let me salute both you and the readers of Aristocrazia Webzine, I also want to thank you for the support and your time preparing this interview. If any serious individuals feel they want to establish contact with us, they can do it through domainsofdeath@gmail.com. Stay alert for the upcoming vinyl/tape releases of "Sinister Ceremonies". A.M.S.G. 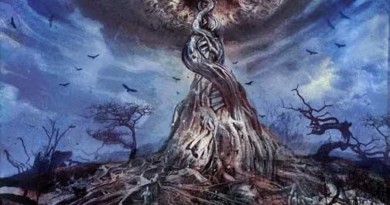