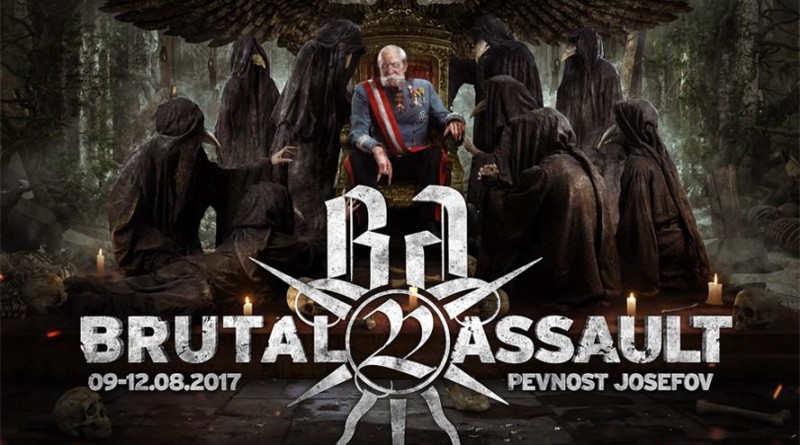 Brutal Assault is one of the to-go festivals in the European metal scene (as we already did in 2015 and 2013), especially when it comes to extreme metal: four days of concerts with first choice bands and exclusive concerts, with one of the best value for money around. Reaching its 22nd edition, it's been located for the last ten years inside the walls of the Josefov Fortress in Jaroměř, near the Polish border. The event went sold out during pre-sale for the first time and it was hard to expect otherwise, with a line-up that included Emperor, Master's Hammer, Opeth, Carcass, The Dillinger Escape Plan and many more. Here you can find an analysis of our personal experience in Bohemian territory. Enjoy!

CHECK OUT THE FULL PHOTO REPORT 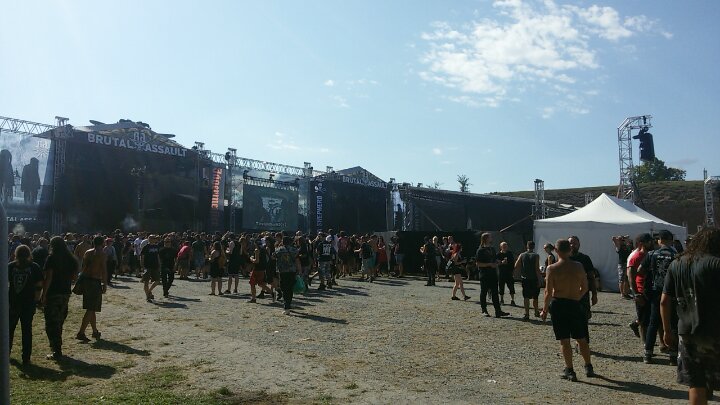 The festival area consisted in a series of open spaces where we could find the various stages: two main ones, the Jägermeister Stage and the Sea Shepherd Stage, were located just ahead of the main entrance and the bands alternated on them, with only five minutes in between. This allowed great efficiency schedule-wise and avoided any overlappings. The second stage, Metalgate, was definitely smaller and hosted concerts by minor but not less valuable bands, while the third one, the Oriental Stage, could be found inside a niche between the walls. Starting from this year, there's also an area dedicated to ambient and electronic performances, inside a lounge area with couches and similar stuff.

In the vast areas between stages it's possible to find a great amount of stands: the official Brutal Assault ones, with festival and bands merchandise, and numerous other ones with CDs, clothing and any other things you might want. Also, food and beverages were present in huge amounts and varieties: whatever your tastes be, they can be satisfied thanks to more than 30 food stands with ethnic cuisine from almost every part of the world, vegan/vegetarian cuisine and sweets, as well as beer from different brands (the main one this year was Pilsner Urquell, after years of collaboration with Budweiser Budvar), cocktails and alcohol-free beverages. Inside the walls it's possible to find benches and tables to relax especially during the hotter days, a meet & greet area with many bands every day and an art showroom with different themes every year.

The whole commercial aspect was narrowed down to a simple chip on your wristband, which could be topped-up online through your bank account or in small offices around the festival area, through card or cash (both in euros or czech crowns). Logistically, a great improvement this year was the possibility of home delivery for your wristbands, which cut out 18% of the total to be checked in on the first day and eliminating the huge lines which were a big problem in 2016. For those who prefer to eat inside the tent, it was possible to buy almost everything in town, with bakeries and minimarkets offering food and other stuff at very cheap prices.

Free camping was available on the whole external area, comprising the hill sorrounding the fortress on the other side of the path/festival area. For those uncomfortable with this option, a VIP camp was available for approximately 20 euros: this guaranteed 24h guarding, reserved toilets and other extras, however available for everyone at cheap prices. Security-wise, there were a lot of armed policemen roaming the camping area this year and there was also a locker area for storing valuable items for a fair price in relation to the valuables that could be lost or stolen.

The first unexpected event happened before the opening, as an accident occurred to a workman who fell from some meters: we didn't have the chance to know about his conditions, but the ambulance and helicopter arrived swiftly after the accident. Bad weather was another unpredictable factor: this year a storm hit the area on the third day, causing a half an hour interruption on the main stages. The concerts resumed without any consequences besides the natural slipping of the subsequent bands.

Reaching Brutal Assault is fairly comfortable independently from the means of getting there: parking lots are huge and the Prague airport is very well-connected also for low cost flights. This option is also valid for Krakow, in Poland. If the distances are not physically impossible to cover and you don't want any surprises in terms of costs, the best combination from Italy might be to take a bus to Prague and then a train to Jaroměř. Flixbus offers direct routes from the main cities in Northern Italy with fairly cheap prices, while the train trip lasts about two hours and costs around 15 euros for a return ticket. Depending on the day in which you choose to travel to and from the festival, the trains can be filled with normal people or with a horde of metalheads, ready to chat in most occasions: during my three year experience, I've encountered neighbours from France to Belarus, with Sweden, Poland and Croatia in the middle. I can assure you that you won't be bored throughout the whole trip, whether it be by sleeping on the night bus trip or thanks to good company on the train. 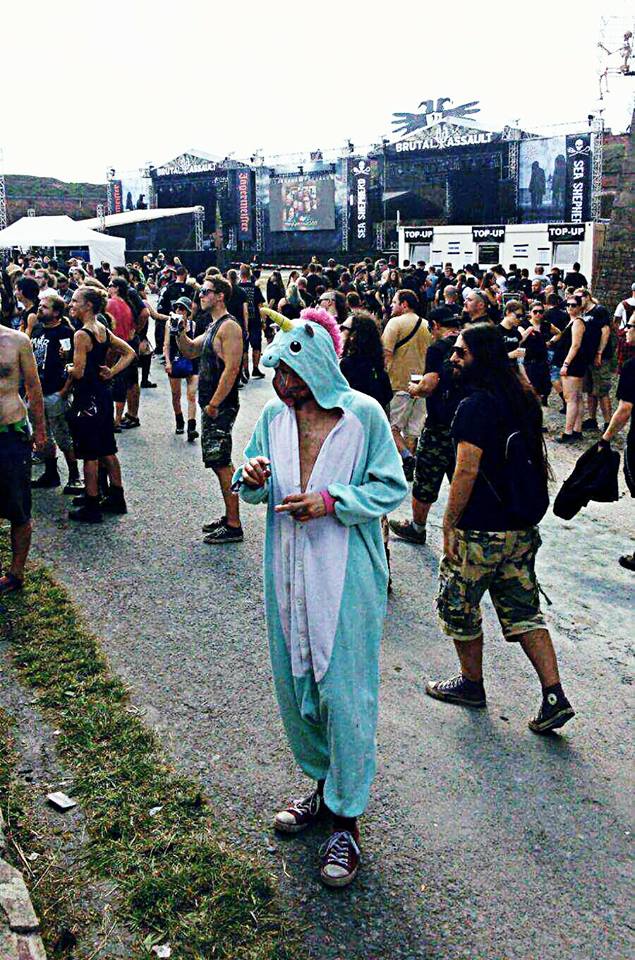 As already said, the festival went sold out during the presale for the first time this year: twenty thousand people each day, with the most varied looks and nationalities. Europe is almost totally covered with a huge presence of Italians, people from the Balkans area and Central Europe, as well as nordic countries and everywhere else. Also some Far Eastern traits were spotted (but we couldn't know if they were actually from there), while at least two or three of the people we met were from the other side of the Atlantic Ocean, namely from Arizona and Hawaii.

The atmosphere was extremely friendly and festive, even if you're an introvert it's impossible not to talk and joke with perfect strangers, not to be seen again for the rest of the festival.

Among the various performances worth pointing out this year, there were especially three for me. 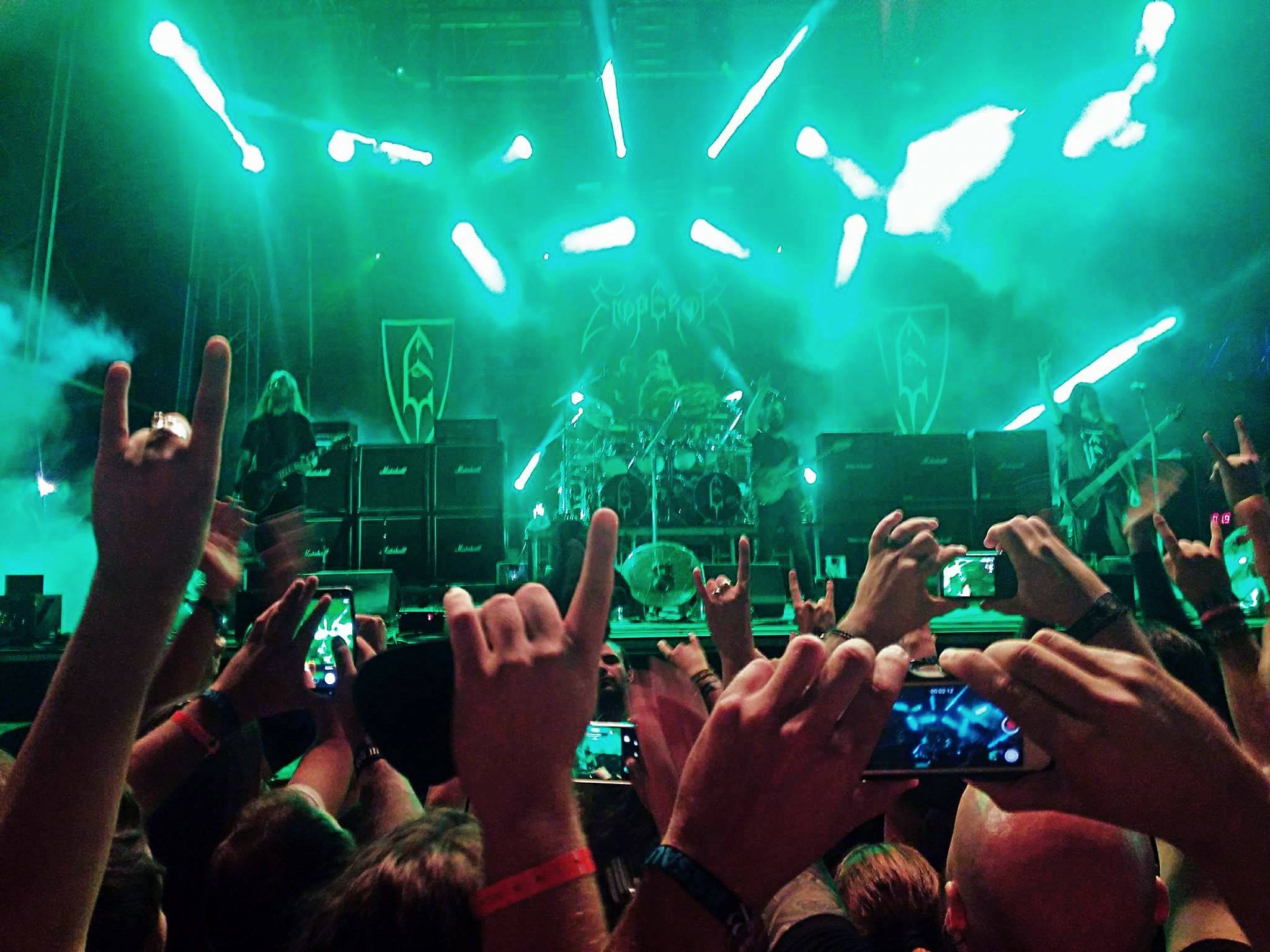 First of all, Emperor: after missing them in 2014, the celebration of "Anthems To The Welkin At Dusk" this year was mandatory to attend. Ihsahn and his bandmates literally set the fortress on fire with the whole 1997 album plus "Curse You All Men", "I Am The Black Wizards" and "Inno A Satana". The audience was huge and wild, with some vigorous moshing (a bit annoying for those who wanted to stay out of it). Probably in the Top 3 of the most heartfelt performances of the whole festival, subjectivities aside.

Right after the Norwegians, neighbours both on stage and on the map, Opeth from Sweden. A very dear name to many of us Aristocrats, everyone knows what happened over the last six years, with debatable studio albums (de gustibus) and fluctuating setlist choices: the fear of getting, for my first Opeth concert, a prog rock setlist was pretty high. Mikael Åkerfeldt surprised us instead, probably knowing that the audience would have killed them had they played such a setlist: besides the opener "Sorceress" that, in all honesty, sounded like lounge music in comparison to what we've heard just before, the songs played were an absolute joy for old fans. Six in total, with "Ghost Of Perdition", the enjoyable "Cusp Of Eternity", "Heir Apparent", "The Drapery Falls" and "Deliverance". The Swedish frontman was, as usual, ironic-but-maybe-not, with hints to an old German band from which he stole the "Blackwater Park" title and to Suffocation who «yes, they play death metal». In conclusion, rivers of tears, masked by the rain (how poetic) and satisfaction for having seen a band I had kept on missing for years.

Last but not least, Carcass from the UK: never a cancellation was more happily greeted than Morbid Angel's (or their remains). Due also to the storm that hit the stages, Jeff Walker, Bill Steer and the new guys hit us with a non-stop exhibition, without ignoring any one of their albums. From "Genital Grinder" to songs from "Surgical Steel", with more or less raw material in between like "Exhume To Consume", "Reek Of Putrefaction", "Corporal Jigsore Quandary", "This Mortal Coil" and the closer "Heartwork". Eluveitie, for once, made themselves useful by lending some of the equipment to the Liverpool quartet along with a couple other bands, due to logistics problems. The only flaw was Ben Ash's guitar which was practically non existent, but when you have the eternally 20-year-old Bill Steer on stage, you don't need anything else. 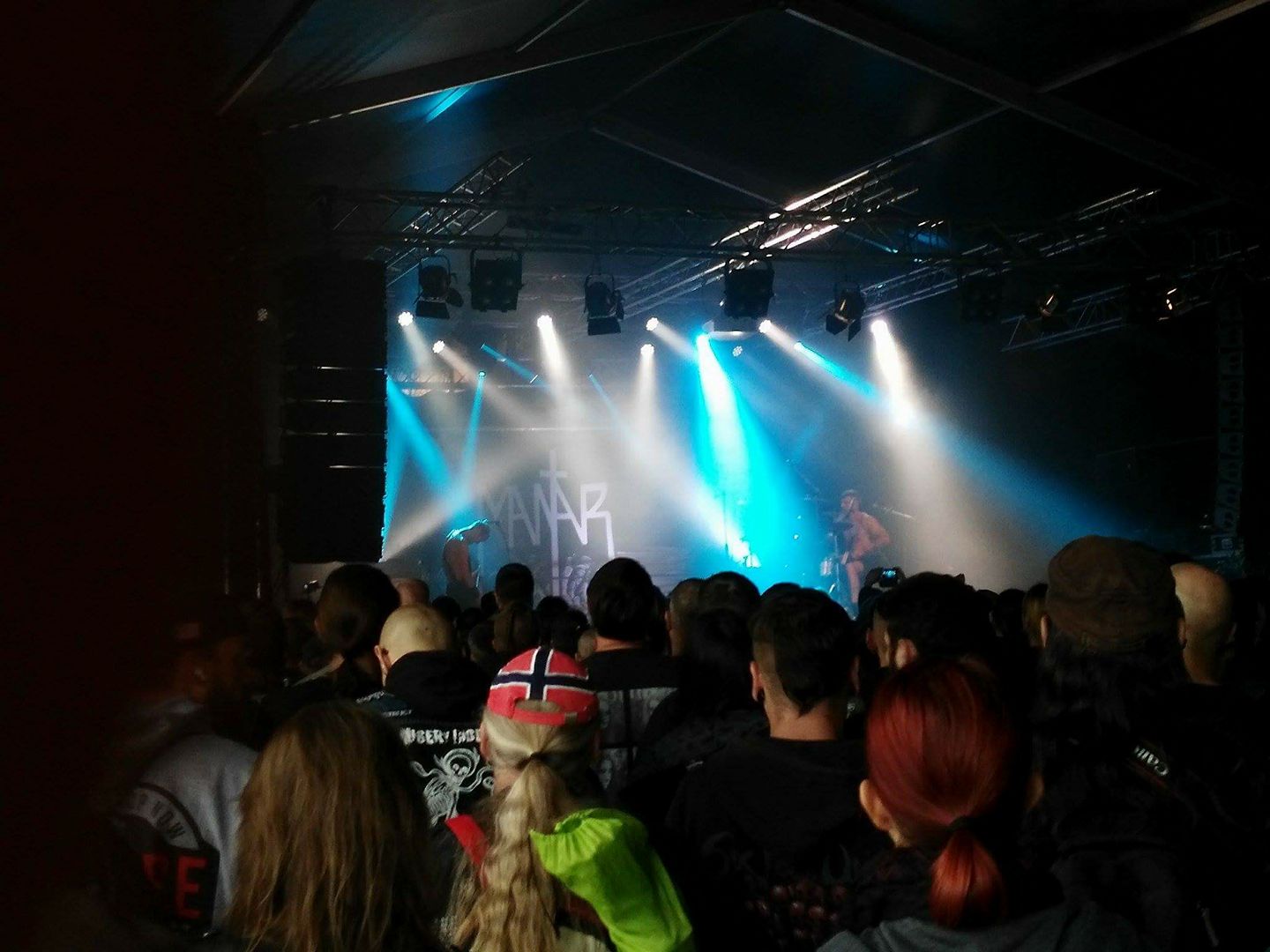 Among the minor bands, one of the best were surely Cough from Richmond, Virginia: probably drunk and stoned, the young trio vomited an awful amount of suffering and heaviness sufficient for years to come (spoiler: it won't be sufficient). Same thing for Vallenfyre, with a filthy mix of unpolished sounds and British humour, they deserve the first prize among the Metalgate bands.

Other honorable mentions for Mayhem (finally with intelligible sounds, differently from their Nova Gorica performance), Mantar [see picture] and Gutalax for the perfect festival closure you might ask for.

Disclaimer: among the concerts I've attended to, none could be defined as a proper failure (maybe besides Tiamat with the nonsensical blabbering by their frontman), so I'll just point out the acts that were just a little worse than expected. 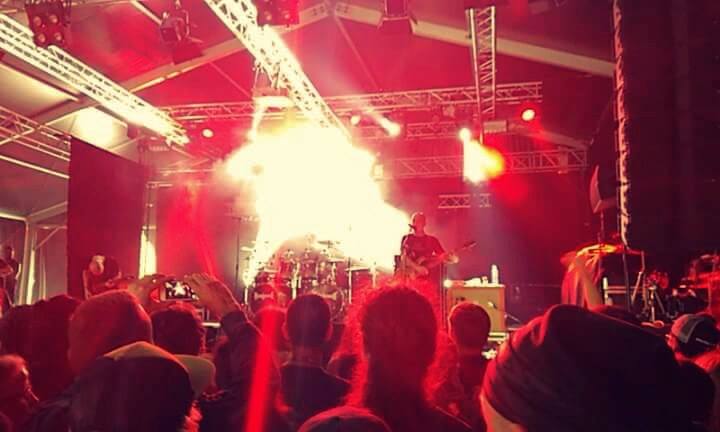 First of all Batushka, which musically speaking were perfect but showed less intensity and atmosphere in comparison with indoor shows; then Ulcerate [see picture], notoriously monsters when it comes to skills but extremely penalised by awful sounds; and then Devin Townsend, but now it gets even more subtle. Going to his concerts and expecting material in the style of Strapping Young Lad is plain stupid, but the concert seemed a bit dull at times, despite a bunch of songs that captivated me and surely all the audience.

Finally, it's impossible to judge Swans' gig: this due to my psychophysical conditions that prevented me to stay any further than twenty minutes of experimentation/madness, which prolonged for two more hours. 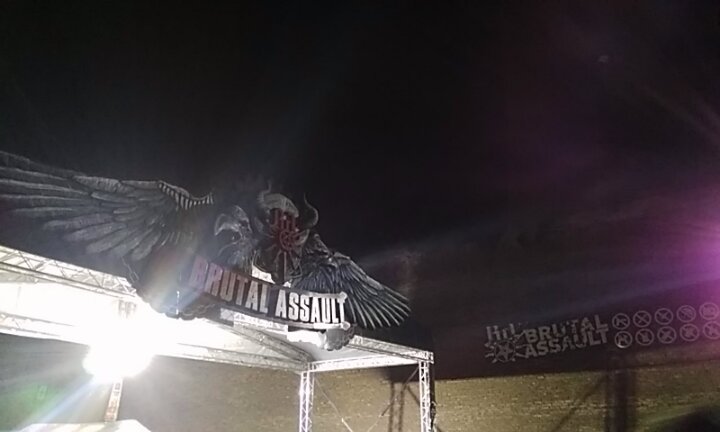 Three consecutive years for me at a constantly improving festival, which has a lot to teach in terms of lineup coherence and quality year after year. Obviously, everything's down to one's personal tastes, but in regards to location, quality and price, the Brutal Assault is an experience worthy of living at least once in your life of festival goers.

Already confirmed for next year are Perturbator, Carpathian Forest and Dead Congregation. Who knows, it might be my fourth year in a row! 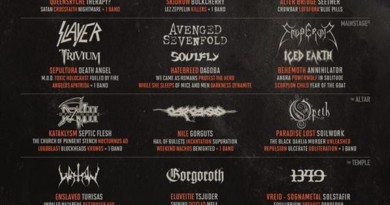