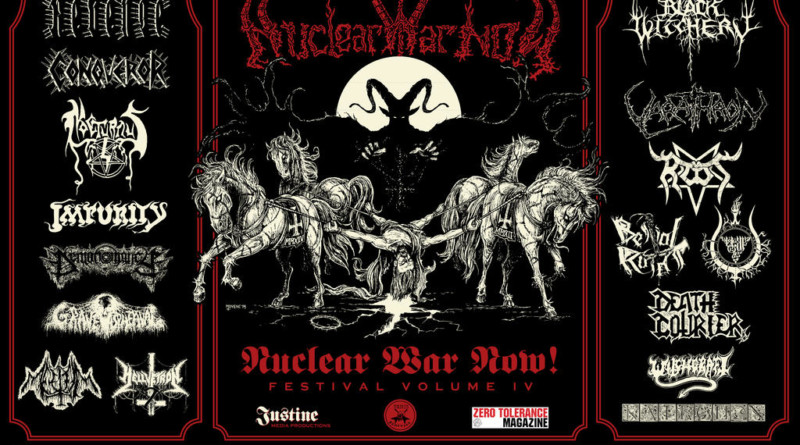 November has been full of anniversaries. The first weeks of World War I took place one hundred years ago; the treaty of Versailles was signed 96 years ago and, a quarter of a century ago, the Berlin Wall fell. In the middle of all this the German capital, already busy with celebrations, also held the fourth edition of NWN! Fest.

The security staff was more professional this year, and allowed for quicker access to the venue. Another point in their favour is their polite way of dealing with the public. The theme of the event appears to be Back to the Future, with the entry bracelet reading "NWN! Fest 2015". 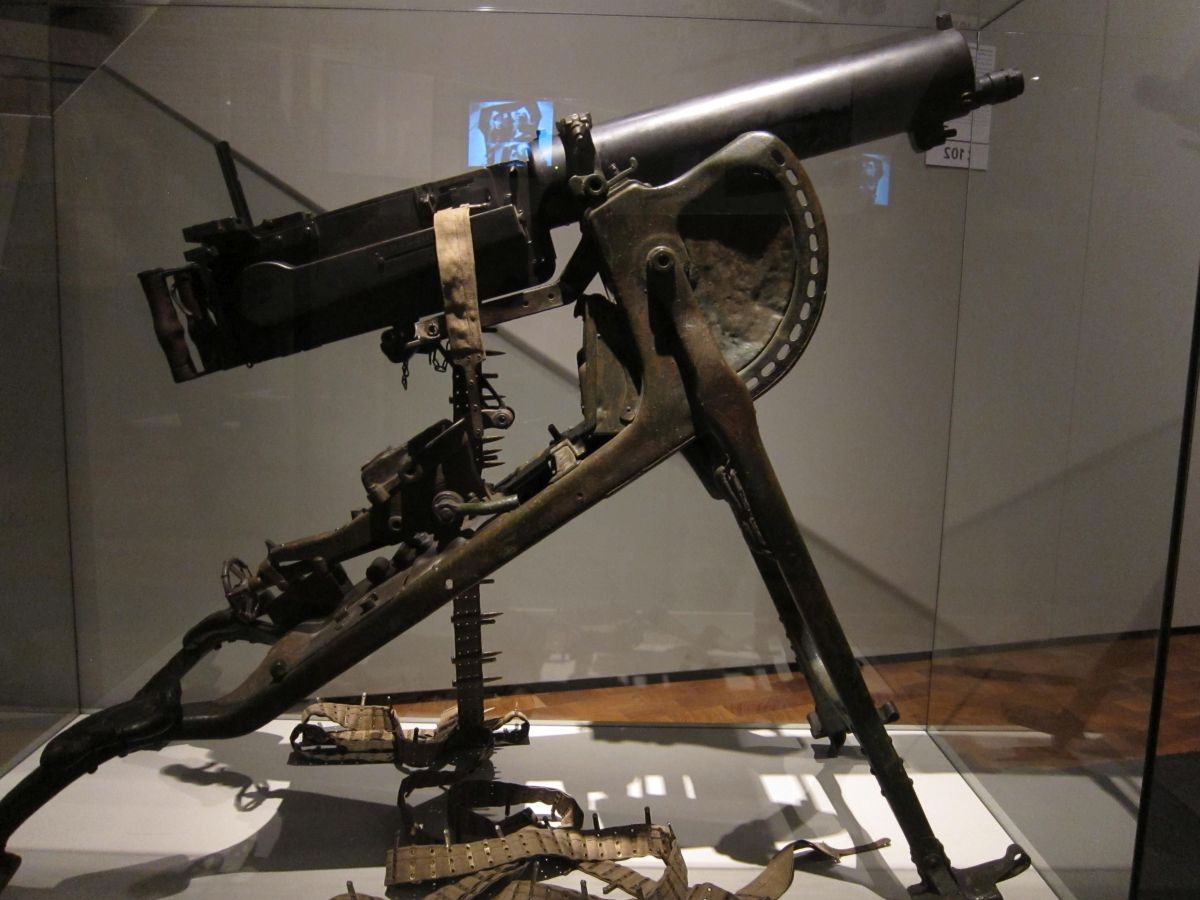 At 1pm on the dot the Italians from Demonomancy kick off their Black-Death set, attracting a sizeable crowd towards the stage. A few issues with the Sin Desecration's bass lines do not undermine the overall performance of the band, which go out on a high in their role as openers of this international festival.

Katechon, however, do not manage to profit from the positive vibe left by the previous band: during their Death metal set, with the singer moving like Barney Greenway, the vicinity of the stage empties. It may have been this image, which did not really fit with the genre played by the band, to steer people away.

Mefitic take the stage afterwards with an impeccable choreography, although a bit static at times. Their dark tracks are well received by the many attending the show, although the songs lose part of their bite due to sound quality issues, which worsened towards the end. This did not, however, reduced the audience's enthusiasm. 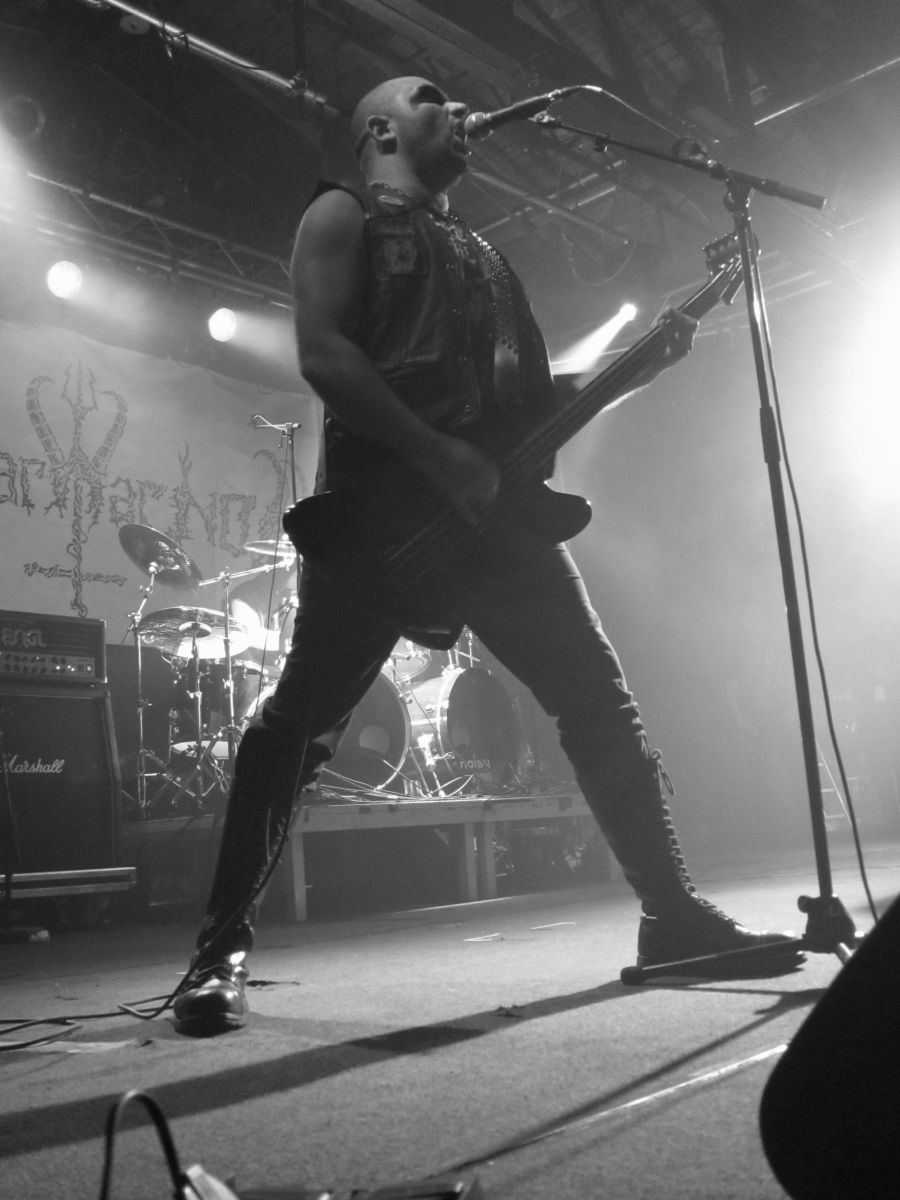 Where are Black Witchery? Berlin, we have lost Black Witchery. This is the rumour that sweeps through the backstage. As a matter of fact, the trio cannot be found. So, it was the turn of Bestial Raids to take the stage an hour earlier. This was greeted wildly by the numerous Polish fans of the band. They shouted "Bestial Raids!" fanatically and increasingly louder, until all hell broke loose. With no particular updates to report here (the last album, "Prime Evil Damnation", was released in 2011), the band from Kielce can focus on their show without worrying about presenting new tracks. Their performance is deeply enjoyable, and is received with great approval from the public. 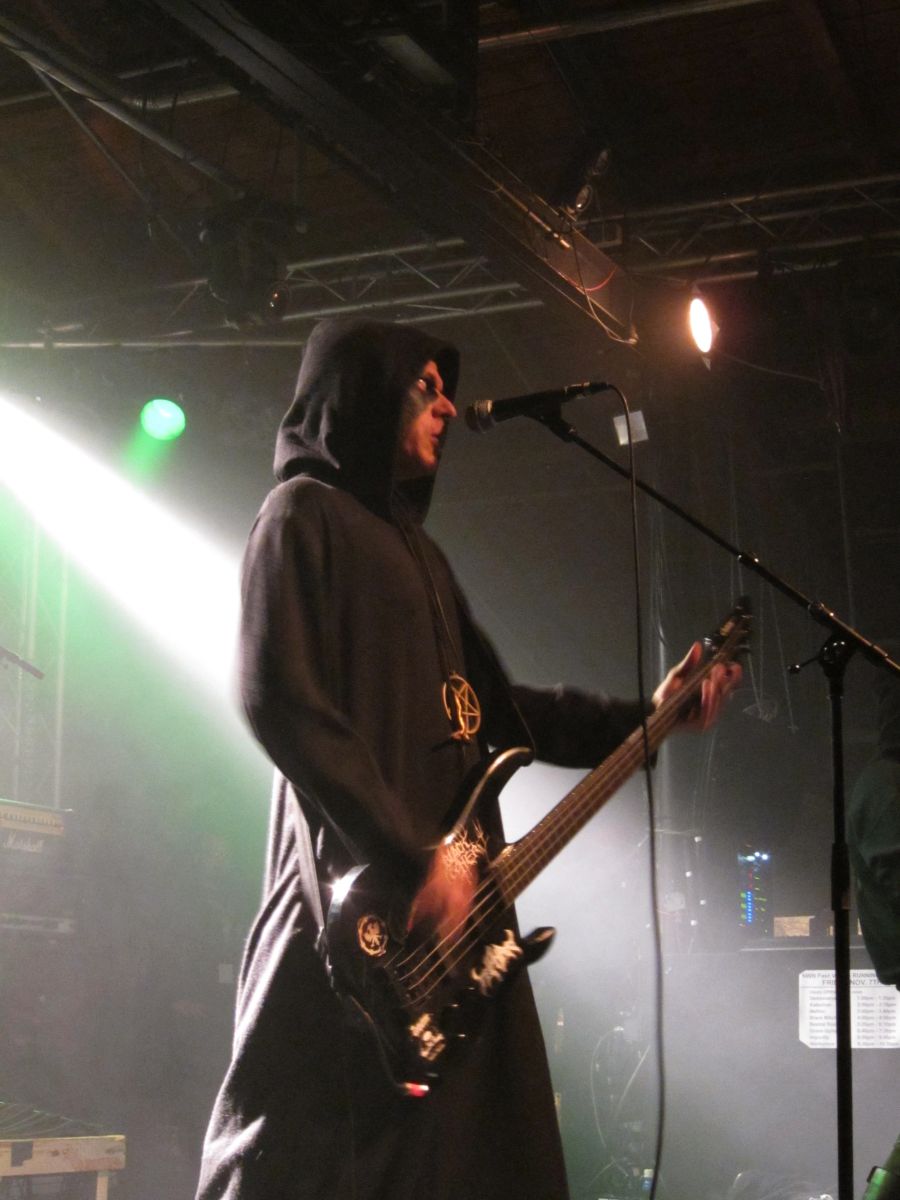 The organisers at this point have finally got hold of the US trio. Black Witchery hit the ground running, possibly trying to be forgiven for the misunderstanding about the timing of their show. The violence of their tracks leads the public in an unrepentant headbanging and mosh pit, entertaining although bloodstained at times.

The heavy and abrasive Death metal by Australia's Grave Upheaval is just what it takes to break from the blackness monotony of the earlier bands. The public is mesmerised by the performance. 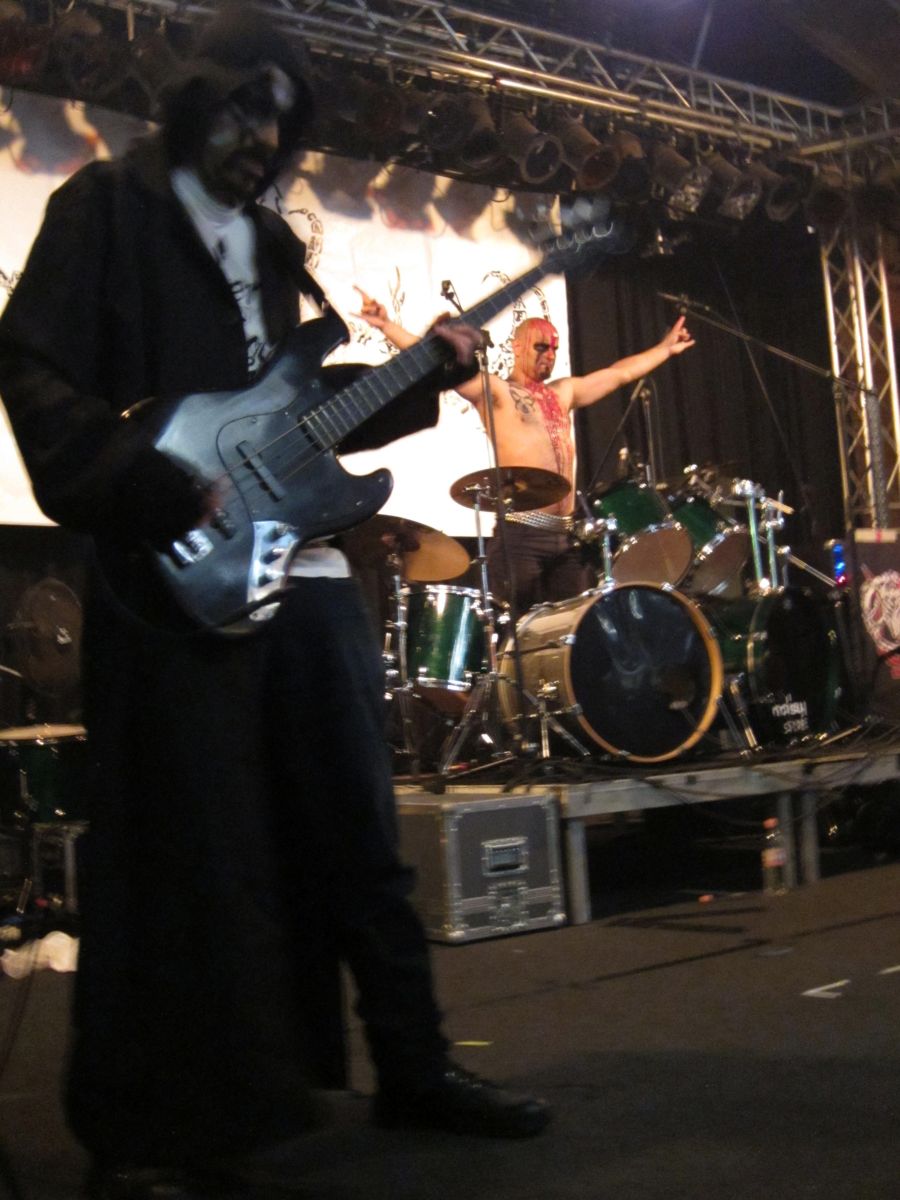 The audience now waits with trepidation for Brazilian band Impurity, active since back in 1988, who are taking their raw Black sound to Europe for the first time.

Singer Roberto is dressed as a monk and is very active on the stage, providing for a lively show. The bloodstained drummer gives the final touch to the satanic image of the band. Their straightforward music, albeit every so often plain, becomes secondary to their robust stage presence. The audience is pleased. 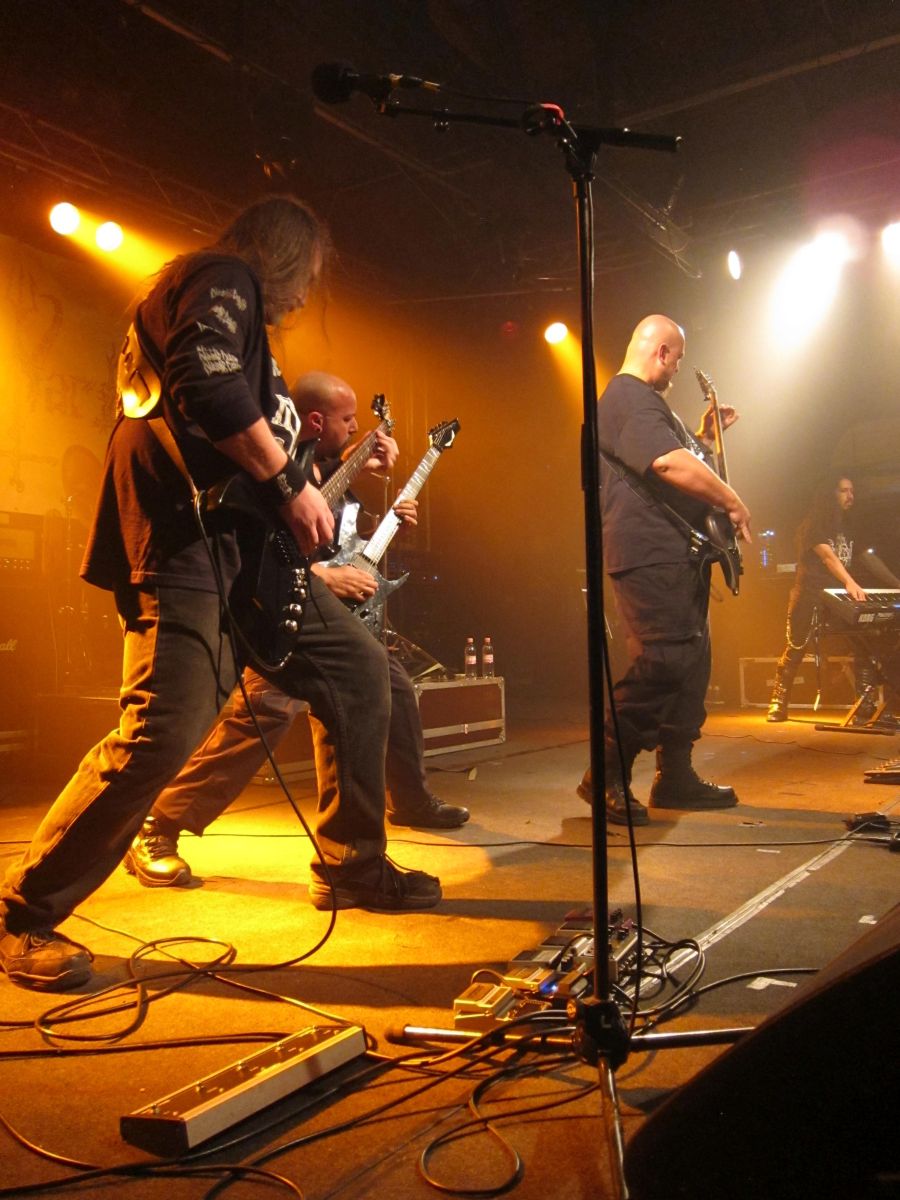 It is now time to leave the stage for the last veterans of the evening: Mike Browning and Nocturnus bring this glorious Friday to a close with a number of classic tracks (playing "The Key" from back to back!) and even two covers, "Chapel Of Ghouls" and "Angel Of Disease". On these two, the sheer energy put the name Morbid Angel to shame. The quartet from Florida shows real passion on stage. The two guitarists, Belial Koblak and Demian Heftel, are the main drivers of this, the public running wild.

This first day of the festival has brought a wide selection of music for all types of taste. The audience, worn-out but satisfied, sets off towards home or moves to other rock bars around Berlin for the rest of the night. 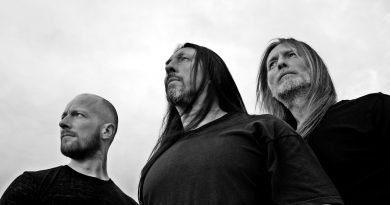 Everything behind Rannoch’s “Reflections Upon Darkness” 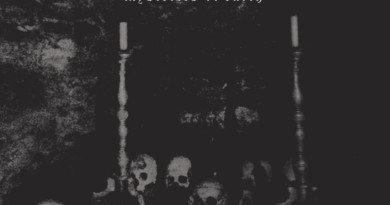