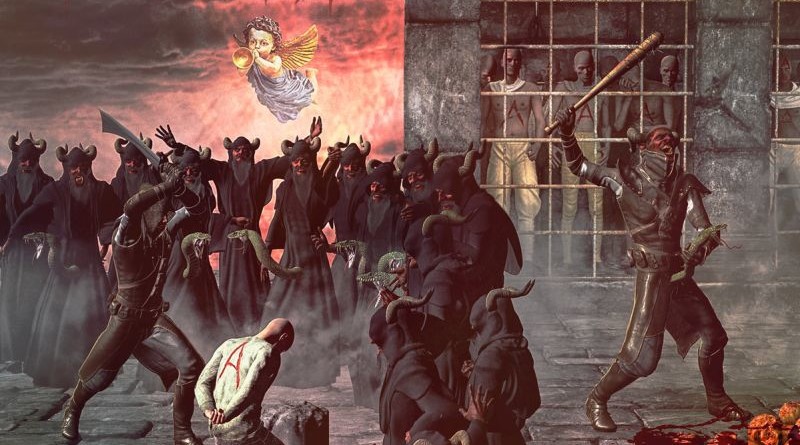 Something has changed for Al-Namrood. The trio from Saudi Arabia is not an unknown name anymore, wading through the endless ocean of niche bands: the addition of Humbaba at vocals allowed Ostron and Mephisto to work in a more stable manner on the music, giving an ever-clearer character to the sound of the Non-Believers, and the results are now evident to everyone. Over the last couple of years, they have even released an interview with an international magazine and an official video visualized thousands of times on Youtube. Not bad at all for a band that debuted less than ten years ago, working on and off with a Canadian label and publishing albums in a few hundred copies.

Perhaps, this increased media exposure — though still absolutely insufficient — helped Al-Namrood become more reckless, aware of the symbolic importance of their existence, while continuing their evolution in both style and content. As already heard on last year’s split with Darkestrah, the Saudi Arabian act brought Ostron’s contribution even more to the front line, with his work on traditional folk instruments. Today we cannot simply define Al-Namrood‘s style as black metal anymore: there is a black-thrash attitude apparently coming from early Bathory and Celtic Frost’s works, though the Arab background is here of absolute importance, while Humbaba’s vocals is very far from classic screaming and much closer to a punk-HC performance. If these aspects are very clear, there are also other areas in the evolution which are at least as relevant and dangerous at the same time.

After the first two albums mainly focused on ancient Mesopotamia and a general provocatory tone (such as the song dedicated to Saddam Hussein as a «symbol of courage and honour of Arabia»), Mephisto and Ostron have started working on a series of concept albums on different eras of Saudi Arabia history, finally reaching with Enkar our present age. This record, the sixth in nine years, «tells about the concept of negation» and in the very minimal booklet speaks about repression, regime, and manipulations by the state.

At the same time, the logo has been changed on the cover, as the «A» became a clear symbol of anarchy, while the mythological images of the past are here replaced by a public execution, while many people are held in a prison at the back. Not surprisingly, the executioner is wearing a uniform, in black just like all the other demonic figures, as the only specks of white are given by the clothes of the captives and the person sentenced to death (with a very red and very recognizable «A» on his back). Needless to say what the content of their latest video was.

If calling themselves Non-Believers and singing about atheism were already reasons for staying anonymous and avoiding potential death, it is clear that Al-Namrood are here raising the bar even higher. Other bands have already left their home country for the West (such as Melechesh or Darkestrah), but maybe no one else has risked it all like Ostron, Mephisto, and Humbaba. As of the moment, leaving doesn’t seem to be an option for them, as maybe the only band around today actually defining rebellion, anthropocentrism, uncompromising self-determination, and black metal.