Hearing about bands hailing from Ireland, in the extreme metal world, is no longer a surprise. For metalheads, the country of green hills and dark beer has stopped meaning radio-friendly pop-rock or beer-drinking folk music for quite a while now, thanks to bands such as Mourning Beloveth, Primordial and Cruachan. In recent years, one name in particular has been mentioned in black metal-related discussions, with interest or scorn according to taste: Altar Of Plagues.

I must admit I haven't been the closest follower of this Cork-based band, giving "White Tomb" and "Mammal" only a few spins through the last three or four years. Perhaps I couldn't take any more of the somewhat pretentious "atmospheric black" that Altar Of Plagues seemed to embody at the time, although generally speaking I was really into that sort of music and concept. However, them being part of the Profound Lore roster — arguably one of the most interesting labels in recent years — contributed to me getting back to them in the last couple of months.

This third album — "Teethed Glory And Injury" — feels very different from what preceded it. It is not divided into four ten-minute plus tracks (the shortest song, "When The Sun Drowns In The Ocean" off "Mammal", still clocked in at about eight minutes), but in nine tracks comfortably seated in a friendly range between four and nine minutes. Nevertheless, the sound here is all but friendly. The instrumental intro "Mills" sets up the mood, gradually causing an anxious state before leading us through this new musical torture, more direct but perhaps less coherent than the first two albums. "God Alone" is the single that launched this LP (together with a video so far from extreme metal standards); good choice, this track is a heavy blow and perfectly embodies what separates this album from the band's past efforts.

"Teethed Glory And Injur" is not about "concepts" developed through long musical reflections, atmospheres that strive to continuously smother or torment us. AOP's offence is now schizoid, intermittent, we cannot focus on a single image (for dismal it may have been) as was the case of the "White Tomb" from the debut. This is perhaps the most "post-" and less "black" (whatever that means) disc in the whole of AOP's career, the trio keeps trying to explore new territories, in a musical panorama where genres and labels matter less and less. Cohesion is where the album falls short, as some of the tracks do not flow together that well. This might be a sign that the band is still not too familiar in this environment, being more used to delivering their concept through longer visions.

On the whole, this album is a good listen and shows good signs for the band's future endeavors: Altar Of Plagues intention of not taking it easy and stopping on well-known paths is confirmed. "Teethed Glory And Injury" is a grower, getting better at each listen. Recommended to those who didn’t like their first two albums as well. 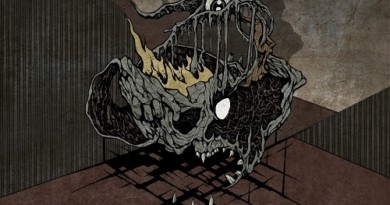