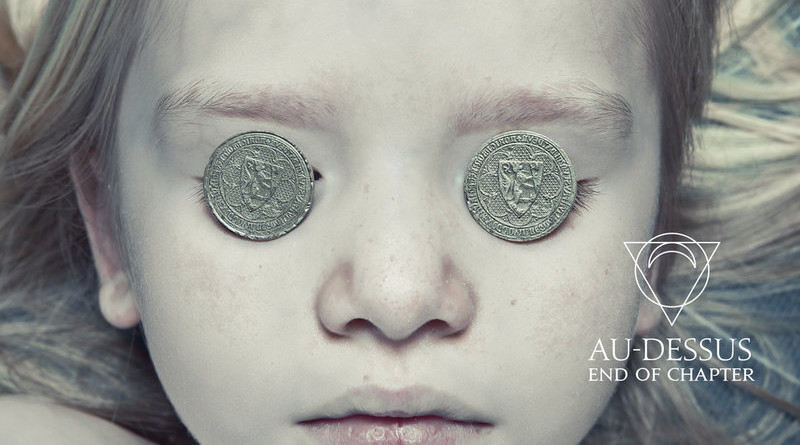 We presented Au-Dessus to you two years ago, debuting with the EP "Au-Dessus" at that time produced by Witching Hour Productions. We meet them again in 2017 with a new album out called "End Of Chapter", under the French Les Acteurs De L'Ombre Productions, a label that constantly keeps an eye on quality releases.

I'll start by telling you two things: first, the Lithuanians have matured and moved towards a more extreme direction, making their music emotively more effective, without turning it upside down or changing it too much.

Second, the album's title probably represents the end of the first era for the band. I came to this conclusion thanks to the progressive order of the tracks, resuming from where "Au-Dessus" ended, and with the cover image that might metaphorically mean anything but made me think of the offering for the psychopomp Charon in order to cross the Acheron river, a metaphor linked to the achieving and overcoming of an important stage.

The Vilnius-based four-piece didn't surprise me, they made me happy. I was convinced the material inside the first release was an ideal starting point for the future and I was even more curious to understand which way they'd have decided to follow to develop it. Today's composition process seems to have brought with it brillant results in terms of balance between the black metal and post-metal aspects (completely devoid of the sugary and teenage side of the latter), further increasing both the strength and the empathetic ability and skillfully shaping cold and furious stabs and languid progressions able to numb and piercing your ears.

"End Of Chapter" is a claustrophobia that destabilize in open spaces, a suffocating breath caused by an excess of oxygen in the air; some sort of passionate contradiction of one's own essence and showing the best of oneself in the parts in which torture coexists with the catharsis and suffering takes the form of an atonement and a difficult liberation. It is living while being sure of being already dead and letting the pain to whoever you have left behind. "X"'s epic theme evolving in a crescendo and the ending acted by that black crystal shining of convulsions, rage and opaque light called "XII: End Of Chapter" are a picture and define all this in a sublime way.

In Au-Dessus' work the darkness and the impetus don't let us respond: adult and mischievous plots reign supreme, even in those static phases that could trick you. It is a wonderful work of art to be included in your collection, confirming that these lords, still so little known, could really become a Big name with a capital «B».

Can we consider "End Of Chapter" a possible yearly Top 5 nominée? It's a risk we can, pleasantly, take.