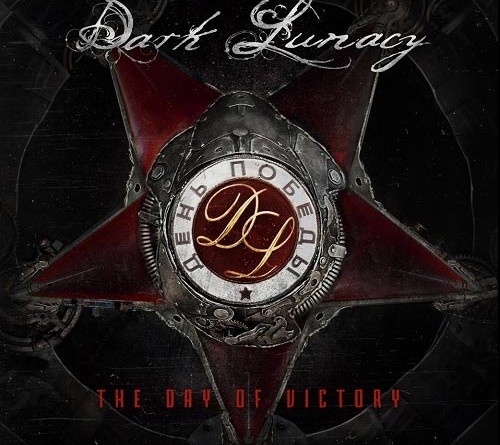 There is much to be said about the latest Dark Lunacy album, and it is not easy to put the ideas together. We have been waiting for Mike Lunacy and the others after their previous effort "Weaver Of Forgotten" (2010) that, I must say, didn't really impress me. After having listened to "The Day Of Victory", that work feels even more like an album of transition, embodying the passage to a new line-up and a way for Mike of proving that he was still standing and able to go on.

In 2014, after four studio albums and a live show in Mexico City, Dark Lunacy didn't have to prove their worth to anyone anymore, and perhaps the pressure got a bit lighter as well. At that point, they could go back to treating one of their favorite topics, World War II as seen from the Soviet Union front; this topic was already the core theme of the monumental and amazing "The Diarist", focused on the diary of a woman who had experienced the siege of Leningrad. The eight tracks, plus intro and outro, of this record accompany the movements of the Red Army towards Berlin ("Red Blocks") up to the signature of the German Surrender on May 9 1945 ("Victory"). Exactly in the middle of the album we can listen to a track dedicated to the Decabrists and to the poems that Puskin wrote for them in 1825 ("The Decembrists"). In short, this is a conceptually imposing and "important" work, perhaps even more so than the aforementioned "The Diarist".

Musically speaking, "The Day Of Victory" is a HUGE step forward from their previous works: the band from the Po Valley had never managed to put melodeath sounds together with strings, keyboards and symphonic elements in such a successful manner. Each single aspect of their sound seems to have a life of its own and feels as a part of a perfectly structured whole. Mike's voice, Daniele Galassi's guitars (the only person in charge this time, as Claudio Cinquegrana didn't take part to the recording of this album), plus everything else, drums, keyboards, violin, accordion, female vocals, and an array of special guests; the amount and quality of the effort put into this work is of absolute value. Things get started with a devastating opener ("Red Blocks"), then we have the slower epic ("Ages Of Decay"), classical guitar arpeggioes ("The Mystic Rail"), but there is especially a clever use or actual recordings of Russian military chants, fitting perfectly into the quartet's performance. The melodic atmospheres and the strings are, as usual, a trademark in the band's universe, but this time they don't force the songs in a perpetual mid-tempo as it happened on "Weaver Of Forgotten"; in fact, in this album the strings work as a perfect counterpart to the (melodic) death metal parts, following in the steps of the Dark Lunacy tradition from the first three chapters of their history.

As soon as the album starts with the shouted "Fire!" that opens "Red Blocks", it is clear that the band is dealing with a complex album, that gets better and better with each listen thanks to its structure. This is one of those works that has to be enjoyed as a whole and not through individual tracks, a well-written record featuring a powerful expressivity that unfolds time after time. In conclusion, "The Day Of Victory" is the nth tangible demonstration of maturity by one the best Italian bands. Welcome back, Dark Lunacy.