Straight from Bratislava, Malokarpatan return with their strange merge of heavy and black metal imbued with local folklore and occultism: Krupinské Ohne (“Krupina’s Fires”) is a concept album based on some events — related to witchcraft — that happened in the small town of Krupina, in southern Slovakia. In the seventeenth century Krupina was haunted by a group of witches who secretly operated and terrorized the locals, until reaching the Holy Inquisition’s attention (Slovakia was part of the Holy Roman Empire) and being purged by it.

Active since 2015, Malokarpatan debuted with Stridžie Dni and then continued with the excellent Nordkarpatenland, after which the line-up was reworked: out the old vocalist, replaced by their then-guitarist HV Von Krolok, himself replaced by the new entry Aldaron (already active, along with drummer Miroslav Slavfist, in Algor). Changes in line-up gave new lifeblood to the band, which, at its third album, makes a great step forward compared to the past, in terms of songwriting and sound.

Krupinské Ohne narrates us the growth, rise and death of a Slovak witch coven (the story is based on a 1979 book, Krupinské Prísne Právo): the music was written taking inspiration from the lyrics and trying to evoke their sinister atmospheres. This is possible thanks to a great care applied to songwriting and sounds, just think of the reverb applied to the cavernous voice of Von Krolok, and also the choice of singing in their own mother tongue, in Master’s Hammer’s way, contributes in giving songs a sinister vibe.

Defining the sound of Krupinské Ohne is not easy: if on the two previous records Malokarpatan were easily defined as heavy metal with considerable black metal influences — where the “old school” riffs were seasoned with a few blast beats and some screaming — here the range of influences becomes much wider: the folk and acoustic inserts are heard more than ever but that’s not great news. What truly differentiates Krupinské Ohne from the previous two records is the consistent ‘70s vibe, especially in Moog parts and in melodic guitar solos which remind a little bit of Led Zeppelin.

Each track is different from the others: they range from the Hammerheart-style atmosphere of the first track — full of epic choruses and riffs — to more traditionally heavy metal songs, up to ‘70s progressive rock, mostly present in the third track (in which a long interlude of synths and acoustic guitars reminds of Rush), and in the introduction of the fourth track, reminiscent of Dario Argento’s movies soundtracks written by Claudio Simonetti.

Krupinské Ohne has the extraordinary ability to evoke remote times and places, literally making the listener travel while keeping his attention alive thanks to the originality and variety of the music, which is a natural “emanation” of the lyrics and not a simple accompanying. With their third album, Malokarpatan have proven that they can overcome the difficulties that line-up changes can represent, managing to reinvent themselves without losing the path traced previously but enriching their musical and lyrical proposition.

«Remember their bequest
and carry ye on the torch of Pan: the terrifying flame of knowing
which was handed to humankind at the dawn of time» 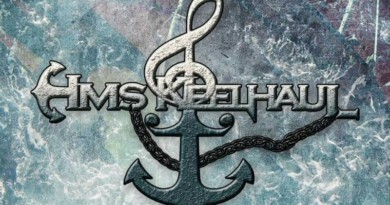