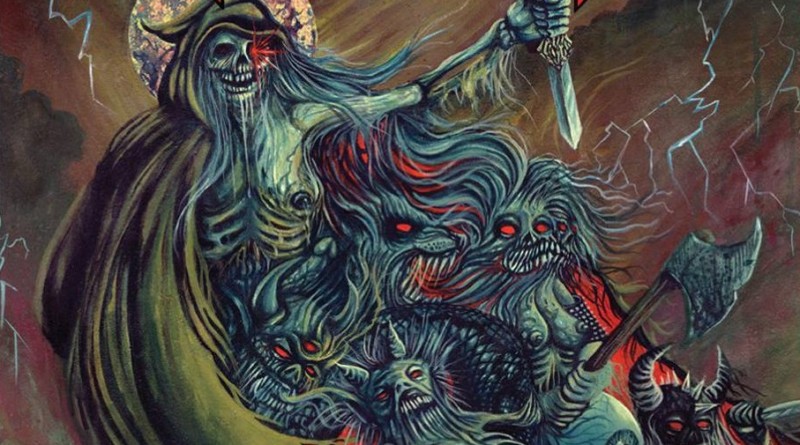 I admit it, when I was younger I was a fan of the darkest South American bands, such as Pentagram, Hardware, and Massakre. The latter name just came to my mind while I was listening to "Storm Of Evil": the raw voice — seemingly coming from hell thanks to Reverberation — and the sheer aggressiveness sound very similar.

Let's start from top though. Mourning asked me if I was interested in Perversion, a trio that has already released a big deal of demos and splits, I liked their track on the "Tube" and so I've agreed on reviewing their vinyl. This album is really worth having for any good collection, the artwork is old school and the package also includes an information leaflet (quite a rare feature these days) with lyrics and a photograph collage as it was in fashion in the late Eighties. Detroit City went bankrupt, but fortunately its metalheads didn't and still manage to release noteworthy products for their listeners. What do Alan, Fernando and Pete offer musically?

The intro really has an Eighties and Nineties vibe thanks to the keyboards, and it foreshadows the metal tornado to come, in all its musical rawness. The band shows no mercy and strikes with hard, raw, and brutal riffs that will capture fans of those old bands founded almost thirty years ago. The three guys know how to knit their textures and proudly give a middle finger to modernity, delivering their rhythm through all their musically evil influences, defined as death or black metal at that time. Yes, this work is an ode to the past, but it is first and foremost an altar dedicated to musical fortrightness. Indeed, this album puts together all the qualities that characterized those genres: no compromises, no melodies, no polishing. It doesn't matter if you listen to the varied "Demoniac Desoliation" or the metal hymn "Devotion To Death", what’s important is that you forget all good manners in order to get carried away by the raw notes, striving to change flesh into steel and destroy all "posers"!

Open a beer, drink it all at once and destroy your apartment. The true metal apocalypse is called Perversion! Not long ago, Mourning described me as a "musical extremist". Out of spite, I will put this work in my "top five" list this year as a reward for its… extremely forced classicism.