RAW POWER – You Are The Victim / God’s Course | Aristocrazia Webzine 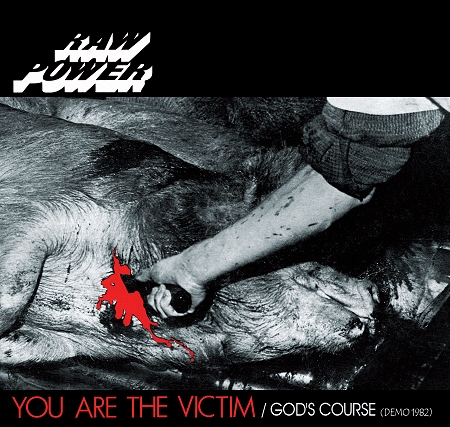 Raw Power is one of those bands that could be added to an eventual list of "glorious" Italian acts. Founded in Poviglio (Emilia-Romagna region) in 1981, this band never forgot its roots and never sold out to a mainstream audience. Raw Power remained loyal to the "hardcore ethics" and, even after more than thirty years of activity and the devastating loss of Luca "Lupus" Carpi, they are still alive and kicking, supported by their dedicated fanbase.

They are one of the main and most prolific names in Italian hardcore punk history, the first that toured the U.S.A. and brought their "made in Italy" sound abroad. The hardcore-related label F.O.A.D Records re-released their debut "You Are The Victims" (originally recorded as a 12'' in 1983), attaching to it the 1982 demo "God's Course". At the time of the demo, Mauro was not the vocalist yet, and the singing was completely done by Silvio and Giuseppe; this new release came out as a digipak rich of extra contents, such as lyrics, photos, and flyers.

Saying something new about a masterpiece like "You Are The Victim" is not an easy task: is there anyone who has never listened to the anthem "State Of Oppression"? Was there anyone among us who hasn't raised hell while listening to "Police Police" or "Raw Power"? 100% pure adrenaline flowing through your body, waking up your rebellious side and pushing you to scream something at random passer-bys.

On the other hand, we can notice a slightly more complex compositional approach in some of the tracks included in the demo "God's Course" ("Power" and "Fuck The Authority"), although remaining close to their trademark sound. Other songs such as "Destroy" and "No Future" showcase their direct anger, an approach that didn't vanish throughout the years. Lastly, we can here find some proper manifestos ("I Hate The System" and "Card") that haven't lost their artistic value even after more than thirty years, both in the music and lyrics. In short, we are talking about the history of hardcore music.

The remastering hasn't done any damage, leaving the band's integrity and soul intact after the sound polishing. Up to now, every time I have listened to this album, I couldn't but feel a slight envy for those who have experienced their live performances at the time.

Is this album recommended? No, if you love hardcore it simply is mandatory. However, long-time fans should already have the original version in their collections, but if you don't you really can't miss on this release.