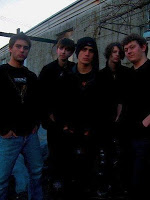 Sure, we're Auroch from Vancouver, Canada. Death/thrash that was summoned by the high priest of Cthulhu in 2008. This is Cuillen (vocals) and Sebastian (guitars).

Cuillen: I'd say extreme influence from novels and atmosphere in general. The love of music having a good time.

Sebastian: The want to write something, heavy and different than all the similar sounding stuff thats out today.

This year he released your first album, I had the pleasure of listening and found it very interesting and varied.Which is the musical background of the band?

Who is the writer of the lyrics and who the composer of the music?

Sebastian: We write most of the lyrics and the riffs, present them to Sol and Paul, and then we organize things as a band. Sol is a great orchestrator and really has a great sense of song structure. Aron handles most of his own bass stuff.

"Stranger Aeons" is a solid album, great melodies, hard steps thrashy and in some parts outcrops death metal attitude.Are You completely satisfied of what you created?

Sebastian: Yes, we are very satisfied, but of course there are somethings that looking back I would have liked to change. It's too late now, but there are a lot of little things I'd do differently. Ah well, I guess it will always be that way.

What evidence had the album since its release?

By those who have there hands on it, its been well received.

How do you promoting it?

Well, we have a Canada wide tour coming up with The Seven Gates from France, and Titans Eve, local Vancouver thrashers. The idea is to get the album heard across the country, and convert more people, haha. Aside from that, we're keeping a good schedule of local shows, playing across British Columbia, promoting online, distributing albums to webzines and magazines like yourself, and doing whatever it takes to get heard, worldwide.

What do you think about the today metal scene? and of your local scene?

Cuillen: I think there are a lot of very different bands coming out across the world, and I'm glad to see metal emerging from more countries and constantly growing
in places that it never has before.

Sebastian: In the local scene there are a lot of great bands, and people who want to play, but there is a bit of venue crisis, with the city shutting down venues
left, right and centre. The city and yuppie bureaucrats don't see any place for extreme music in their vision of how this city should be. As long as there are metal heads around though, there will always be metal. We're not going anywhere.

Turning on your myspace I saw that you have a lot 'of live dates scheduled. How is important the situation live and how do you live the on stage?

You have to play live in order to be popular in the local scene. Gotta play lots of shows in as many places as possible to promote yourself. No one is going to pick up a CD in a store and just buy it. No metal head has the cash for that. They have to know its good.

Getting encores at great venues (like the legendary Cobalt), having people singing a long, seeing people with your shirt on, and no matter the turn out seeing people who are having a good time, thrashing about. We feel every show we play is better, so we'd rather not repeat anything *laughs*

We're all for online networking and online distribution, because you can reach out to other countries. As for our supporters, if they like our metal we like them, and would love to meet each one of them, whatever corner of the earth they're in. If don't like it, FUCK OFF, we don't want you listening to our music anyway.

HELL YES! We'd love to come and meet some real Italian metalheads and thrash the Vatican with Satanic rage! It'd be an honour to play Italy one day!

Thanks for taking the time to read this, check us out on myspace @ wwww.myspace.com/theauroch True metal will never die, and if it does, it will be undead and kick more poser ass.
IA DAGON! IA HYDRA! IA YOG-SOTHOTH, THE SPHERE THAT CONJOINS! KHTHUHLHLU WILL AWAKEN! FORZA ITALIA!