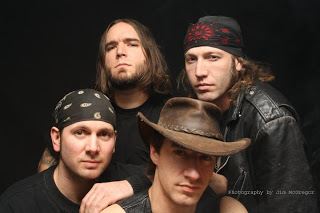 Today we talk about rock, we have the pleasure of hosting the Brend New Sin on Aristocrazia Webzine. The Syracuse’s band has released in 2011 the fifth work “United State”, let’s deepen the situation.

Welcome to Aristocrazia Webzine, we begin our conversation by giving some information on the history of the Brand New Sin? How and when they were born, who are the members now, etc., I leave you the word.

Kris: Charlie, Kevin, and I go way back. I always get a kick out of being able to honestly say to people who ask this question that if you were to tell me 15 years ago that I was going to end up being in a band with Charlie and Kevin I wouldnt have believed it. I started jamming with Charlie in the late 90s when we started our first band , God Below. God Below eventually turned into Brand new sin. Brand new sin over the years has pretty much been an ongoing process of weeding out. I can sincerely say that I feel the most confident in the line up today. Tommy, (our newest guitarist) is younger than the rest of us, but we go pretty far back with him too. Syracuse is a real small scene and he used to play with a band called, “The born again rebels”. We had all seen him play plenty of times before so we all kinda knew it would work so we roped him in and we couldnt be happier.

Changes of line-up and labels, self-production and now the return to Goomba Music? What causes all this trouble? Is a real problem that carrying on a rock band is a mess?

Yeah, it really is a pain in the ass trying to keep a line up. I’ve heard it said behind my back and to my face more than once that I’m something of a control freak when it comes to pre-production, I cant help it. I dont doubt that i’ve driven people outta this band in the past, but when I write I obsess over it, and I fight for the way I want it to turn out, I often times insist. We all write the songs together and always have, but if somebody has a really strong feeling about where a song should go we’re all smart enough to trust in that guys vision. I honestly love everybody that’s ever been in this band, sometimes it just doesnt work though ya know?

Brand New Sin have always been a coherent band, you have never produced bad albums, and even in difficult times you are able to look ahead, What makes you positive and eager not to stop your desire to make music?

I dont even consider it our decision. When times are hard it’s inspiring. At the core of BNS, it is nothing more than 4 guys getting along, writing songs, and drinking too much on a regular basis. When the old line up came crashing down and everybody thought we were gonna pack it in. We didnt, we couldnt. We made an album, (“Distilled”) and released it ourselves, I dont even think we tried getting a label to get behind it. It was like we didnt give a fuck about that side of things during that time. We were in a sort of therapy so to speak. We just love it too much to stop it.

If you had to choose three adjectives to describe your music and Brand New Sin today, what could they be and why?

Stubborn: as in we are way too dumb to give up. Ultimately in the long run I’m hoping this is going to work to our advantage. Sincere: We play and write our hearts right out. It keeps us from being trendy or trying to sound like some other band. We dont allow ourselves to be influenced by what is selling today. Evolved: I’m happy to say that when I look back on our catalog of music that I really believe that we have learned more than a thing or two about writing and musicianship. I’m happy that we arent stagnant in our creativity.

How did “United State” born? And why did you choose this title?

Actually by the end of the recording and mixing process we still hadnt come up with a title. I suggested, “United State”. I dont usually get political in my lyrics and there arent really any political songs on United State, but I like a record to have something on it to always remind me of what kind of shit was going on at the time. Our first album starts out with a sample of an emergency situation because 9/11 was fresh in our minds. We did “House of the rising sun” on “The Tequila record” when New orleans was flooded. With the world economy sucking the way it does right now, “United State” implies that most of us worlwide are all in the same state of mind. Pissed.

In what and how has it changed the compositional style of Brand New Sin over the years?

We used to write most of our songs based on the riffs. We dont do that as much any more and that has opened up entire worlds for us I think. Alot of times I come up with lyrics and vocal melodies first and then find a key and chord progression that suits it. We practice acoustically alot more these days and that has helped us develop a more mature and tasteful sound. It makes for way smoother pre-production.

I considered the album really to “company”, it has a “family” sound of those who want to listen in a small room with friends to enjoy the night, this was a bit the idea that you had proposed to bring forward?

I dont know. I think it kinda turned out that way on accident. Songs like, “Rotten as hell’, and “Elbow grease” that have more of down home feel to them maybe help set that mood. It was definately not intentional, but I think it works great.

Why the choice of cover version of AC/DC and Black Sabbath?

Our management and label as well thought it would be a good idea to make a few bonus tracks available for the fans. It was really cool to be able to do these songs. The AC/DC one Charlie suggested. I think the lyrical placement and the way the vocals are kinda busy reminded him of something that I wouldve written myself. Always loved that song. I suggested “The Wizard”. My buddy Grant and I used to jam this out at Charlies after BNS were done rehearsing. I always wanted to get a recording of it.

In various forums and sites have circulated the rumor that some major label would, in a short time, remove physical media relying on a single digital format. What do you think of this purely commercial move?

I miss records. There is no denying where the music industry is heading though. Better just get used to it.

After this question to me is natural to ask that: what sense are words such as rock, metal, underground, art and culture for you? It almost seems that everything is now sold out or not considered.

It’s kinda funny. Before free music and file sharing bands would kinda bitch about being labeled as one genre or another, but these days it’s kind of a must have. There is so much music out there. It’s really gotta be classified some how if you want it to get into the hands of the people that will appreciate it.

The U.S. market is certainly among the most comprehensive and varied in music field, what are in your opinion the most absurd bad things that populate the world of music now? What qualities of the past that is gone now, there seems to be fundamental?

I saw this rant on youtube where Henry Rollins is complaining about modern rock and I think he nails it. Basically, alot of bands are overly polished and overly tweaked with pro tools and shit like that. There are no imperfections at all. It’ like all the heart and soul is removed. But it goes back to your other question too, there are plenty of great modern rock bands I’m sure. You just gotta go diggin through the fucking internet to find them. You definately cant count on commercial radio to bring you the best of it.

As has been carrying on stage the pieces of “United State”? Reactions of the fans?

Very positive. There have been alot of great reviews and the fans are totally digging it too so we’re verry happy about that.

The most beautiful experience and the worst that you remember in live situation? Do you have anectodes to tell?

In the early days of BNS, Charlie and I would always overdo it on the drinking. More than once he has knocked over the back line or thrown his bass across the stage. I dont really drink hard liquor any more, just beer. I can remember drinking Jack Daniels one night and having some awful mix of sound on stage, walking off and choking some friend of Kevins backstage. I ended up crying and acting like a fucking shithead, had to apologize to everybody. It fuckin sucked.

In these years you’ve shared the stage with various artists such as Motorhead and it is impossible to forget the collaboration with Peter Steele, guest on “Reaper Man”, a song in “The Tequila Record”. What are your memories of these artists and of other who have made to you a particularly good impression?

It’s always been absolutely fantastic. Peter Steele in particular was one of the coolest. He was totally down to earth. I remember him coming into the studio and offering up the wine he had brought with him, joking and making everyone laugh the whole time. We miss him.

What are your short-term programs? There’s something coming?

We wanna come to Italy, somebody hook it up for Christs sake!!!! We havent yet gotten the opportunity to tour throughout Europe. That’s really what we’re shooting for. Please check us out at www.brandnewsin.com Thanks for listening and we love you all.