BY THE PATIENT (english version) 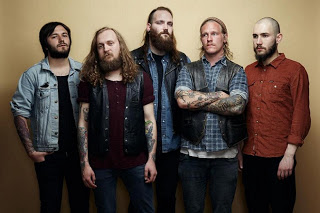 By The Patient is an emerging Danish death metal band; they’ve released 2 full-lenghts so far, the last of which, “Premonitions”, dated 2012, has been reviewed on our website. But who are they? Where does their love for death metal come from, and what will they be concentrating on in the future? Let’s ask them.

Hi guys and welcome, how are you doing? Your album has been released very recently, can you still feel the adrenaline?

Hi. We’re doing well. Practising new material atm. Yes, it’s been out for about two months now. We still feel psyched about this record. Great reviews are coming in on a daily basis, and we love playing the songs live.

Let’s start by giving our readers a wide view on your band, how was it born, who are its members and what are the main steps that led you and involved you in this project?

We started out on the small island in the baltic sea, called Bornholm. Three of us started the band back in 2005 and after moving to the capital in 2008, the lineup as it is today, was completed in 2009. Adam on drums, Troels on Bass, Theis and Simon on guitars and backing vocals and Tan on lead vocals.

What did you do during the two years between “Servants” and “Premonitions”? Did you play many live giigs? What’s been like to compose this new album?

We matured. We played some very important gigs like Wacken and Roskilde Festival as well as our first tour in Denmark. It was different from the writing of “Servants”. This time we just wrote a song that we really enjoyed playing, and not for the challenge of playing very technical death metal. That was the main thing on “Servants”. No restrictions on melodies and catchiness this time. No fear of the songs being too melodic or simple.

I’d say your sound has changed a lot in this new album, I noticed some sort of violent “Europeanization”; did you draw inspiration from some of the post-metal influences that give a particular sound to some realities geographically closer to you, or else, how did this change happen? Did the bands you usually listen to change as well?

Yeah, and you are quite right. A lot of Scandinavian inlfuences appears on “Premonitions”. Not because we did that on purpose, but it just turned out that way. This time we didn’t think much about how we wanted it to sound like, just what felt right and made us smile and bang our heads and bodies even harder in our practice space. A more natural approach on writing songs. Of course, the music we listen to when we compose our music, has something to do with the final result on our own record. This time we listened to a lot of Black Metal and sludgy stuff and that definitely had somthing to do with the riff compositions.

I appreciate that in your songs not only there’s a violent “in the face” element,but there’s also a pursuit for atmospheric wanderings and rithmical changes to give a certain pressure to the album; “Ocean of Emptiness” and “Eyes” could as well be the product of two different bands. Are you satisfied with this result? What, in your opinion, are the tracks that could become the major “hits” of the album?

We really love the diversity of this album. And that, without losing the feel and atmoshere of an album as a whole, is what in our oppinion, makes an album stand out. We could see all songs become hits, because of the diversity, but maybe: “Where Time Collapsed”, “Oceans Of Emptiness” and the title track. There is melody, groove and atmoshere.

Jacob Bredahl did both the mixing and the mastering for “Premonitions”, how did you get to know him and why did you choose to work with this figure, that’s becoming more and more present in the scene?

Jacob is simply the best at the moment. He actually did the mastering job on “Servants” and we wanted to do a full length with him ever since. When we contacted him, he was just as excited as us about making “Premonitions” and we think the result is perfect. He captures the feeling and the sound of the band, without any fake replacement and shit. Raw and naturally sounding stuff. We will work with him soon again.

Talking about the artwork, you got to work again with Toshihiro Egawa, and the difference between the two booklets is quite clear, both in colours and in style; would you care to explain, briefly, what’s the message behind each of the two artworks? The titles of the albums and the lyrics of the songs are of great help there, but I think that the impressions of the artists themselves, in this case you, are of great importance to get a better understanding.

We love Toshihiro’s work on both “Servants” and “Premonitions”. He painted a really beautiful picture and captured the feeling and atmosphere of this record. We added some artistic changes to it so it would fit the title and lyrics in whole.

From being part of the roster of the Belgian Ultimhate, a label that’s moving well in the scene, you’ve passed to Deathbound, another small but effective label, how did you get in contact with the Canadians?

We have a manager, that helped us a lot. He got us in contact with both Ultimhate and Deathbound. We are really satisfied with Deathbound at the moment. They are doing a great job on getting our album out there and it’s getting even better. Some very hard working guys. That fits our mentality perfect.

Is there something you don’t like of the current metal scene? What?

We always disliked the conservative thinking of many metal heads. If something is new, it is bad. Even if new bands are playing old school death metal, (not saying that we are) they are still called death core, just because its not released in the early ninetees, or beacause of the bands young average age. Just all the labeling thing is getting out of track. Just listen to great music and if you don’t like it then just don’t listen to it for fuck’s sake.

We don’t care about the scene at the moment. There will always be some bands who will make som shitty music in every genre and no, emo-core and melodic-pop metal is not what we are listening to, but if some people find joy in listening to it, well, then let them. We really don’t know what death metal is. It is hard to define. To us, death metal is about capturing the more darker sides of the world and getting it out audiowise. If you can say so.

A lot of good/great metal bands come from Denmark, such as Artillery, Konkhra, Corpse Vomit, Exmortem or Invocator. How are things going today? What do you think are the most valid bands at the moments, apart from the “old” acts?

The scene is actually more interesting than ever, we think. Some blackened/post-hardcore stuff like Ajuna, The Psyke Project and Hexis is actually what we think are the best. In our opinion.

What about the rest of the world? Which bands in your opinion are the best hope for the period following the “retirement” of the most famous bands?

Right now, bands like: The Secret, Trap Them, All Pigs Must Die, Altar Of Plagues and Black Breath.

Knowing that the vynil is still loved by some fans of a certain sound, did you consider releasing a vinyl version of your albums? Would you appreciate an offer like that from your label?

We are definitely considering pressing some limited vinyls of “Premonitions” and our label is up for that too. So maybe in the near future.

Internet, MP3s and Webzines; the amount of information circulating on the web is enormous. How much, in your opinion, are technologic advancements an advantage (or a disadvantage)? Did it solve those issues linked to long-distance and neverending waiting times, or did it only give space to industrial-level music leechers, reducing art to an automated series of mouse clicks?

It’s only great that more and more people can hear our music. And even if it means ‘stealing’ our music on the internet. You can’t avoid it so if it means that we will gain new fans, then do it. If people want to support us, they can buy our cd or go to our shows and buy some merch.

Let’s talk about gigs: what’s it like to experience a By The Patient live gig? What’s your recipe for a perfect live?

It’s a load of raw energy and compassion. I think it is pretty clear to see that when we’re on stage, we’re doing what we love. And maybe we got more of a rock’n roll attitude, than evil death metal looks. It’s all about getting into the music and let it shine through to the audience.

Any forthcoming gig? Is there an actual tour to support the new album, maybe with some events in our peninsula?

We are planning tours in our own country and across the borders. Can’t say if we are coming your way soon, but we would really love to. We would love to play in any parts of the world. But a lot of touring is being planned at the moment.

We’ve played quite a lot shows in this band, but I think the emotions before getting on stage are the same. We love to play our music in front of people who likes it, and if there’s only one or two heads moving along in joy for our tunes it’s great. Of course we are handling our nerves different now, but we can still surprise ourselves sometimes and go like; “Wow, i’m actually quite nervous right now!”. Even if we thought it would be a piece of cake. But that is a healthy emotion to contain.

Three objectives you’ve achieved and three you’d like to achieve, as a band?

Roskilde Festival, Wacken Open Air and getting signed. But just to have made an EP and two full length albums. We would love to play in the States. And continue making albums. And hopefully just play more and more shows.

An album, a book and a movie that have had a particular meaning for you in your past? And in the present?

“Leviathan” (Mastodon), “We, The Drowned” and maybe “There Will Be Blood”.

Five words to define “Premonitions” and suggest it to our readers:

Well, well, it has been a real pleasure to have this chat. The interview ends here, but it’s up to you to say the conclusive words, to say hey or send to hell whoever and however you like!

Thanks for giving you time to read our shitty words, and just listen to our music instead. We bet it makes more sense. Thank you and hopefully we’ll see you on the road soon!