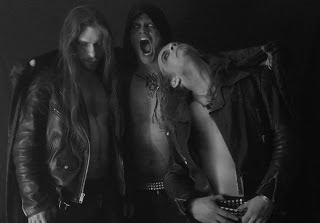 I am glad to chat with the members of a black metal band that I consider to be one of the best nowadays. Her name is Chaos Invocation and their second work “Black Mirror Hours” will flagellate our and your souls. Let’s listen to their words.

Welcome to Aristocrazia Webzine. Chaos Invocation’s summer seems to be dominated by frost and obscurity if I listen to the new work. How are you?

I am fine, thanks.

Who are Chaos Invocation, how was the band created and which are its objectives?

Chaos Invocation is the circle of M.-vocals, T.-drums and A.-guitars, vocals. The band was crafted in 2004 as a tool to express our religious beliefs. We walk the path of snakes, focused to become what only a few are ever able to become. On this path we characterize terms like: luciferian terror, baneful magic, timeless end, breathless death.

In 2009 you released one of the most important and, at least to me, significant works for the extreme music for that year, “In Bloodline With The Snake”. Is it still representative for Chaos Invocation today?

Of course we have increased our knowledge and skills on the musical hand, but even more and I think, that this is way more important, on the spiritual hand. “In Bloodline With The Snake” is still representative, because it bears the impulse why we choose to start up with Chaos Invocation. It is hard to say in how far the records distinguish from each other musically. I recommend to make yourself a picture…

Which are the most satisfying points of that work to you?

You probably do not mean our magical work. So the most satisfying things for me to come along with this band and with the new album are, to listen to our songs and to feel that we have succeeded in manifesting and expressing what we wanted to.

At that time many people paragoned you to many acts of the “orthodox” movement. Is there a band in that movement that you think is sharing much of your essence?

There are very few bands, that presumably share the same essence like we do. But I won’t list them in this interview, since I am not 100% sure.

Two different editions of “In Bloodline With The Snake” do exist and they have different artworks. Where they created by the same artist? What pushed you to change the aspect, also symbolic, of the first version?

No, they were created through two different persons. The main reason to change it was the fact, that the lyrics were barely readable in the first edition. All sigils related to our work maintained in both versions. The main reason why the layouts turned out different was, because we did not limit the originators. They should create the booklets inspired by our music.

“Black Mirror Hours” is different, the dynamic of the songs is often more vivid and scornful but at the same time with an atmospheric aura and the redundancies typical for the first work. How was BMH born? Did you choose a different approach to compose the songs?

It was just like it is with every birth. It is a natural process that works out nearly on itself. Mostly I already do have several song titles in mind with which I connect clear pictures. I just need to pick a moment that feels right and the music flows out of me.

Guitar solos also find more place to evolve, very nice the one in “Lord Of Our temple”, there is also a solemn opener with clean voice in “Funeral Messiah”. I consider this points signs of a new maturity. Do you feel complete in your evolution as artists or you’re still growing?

Since the way of being an artist is inseparable aligned with our “self”, the answer to your question is no. We will grow, develop, increase our knowledge, widen our aura and chakras until our last breath.

I also notice a different production, more proper and clean. Was it a choice or casual? Who was responsible for it?

The album version you know is not the final result. It will be revealed when the album is released officially. But you are right. The production is different. This time we brought our own equipment. By the way “Black Mirror Hours” was recorded in the same studio as our firstborn record. We feel very comfortable in the Hellsound Studios and at least Ronny has a good sense for our type of music.

Also this time the texts are fundamental to show the way till now. If “In Bloodline with snake” the words were concentrated on invocation, “Black Mirrors Hours” can be seen as the medium allowing the entity to get in touch with our world. Is my vision correct or is it a misinterpretation to think of the first to chapters as a part of a trilogy? What can we expect in the future?

I don’t know where this comes from, but I never said, that we try to put our work into a trilogy. “Black Mirror Hours” is still a part of the first chapter, which is “The search of keys and gates”. The main focus of the lyrics on “Black Mirror Hours” is the theme of invocations. The corpus is build up by the question on how to liberate yourself and to become something greater, while the extremities are formed by perceptions and experiences that we made due invocations.

Which are the basics you need for writing a text? How much do research and instinct meet in the process?

The process of writing lyrics is similar to the writing process of the music. Of course we have red several books to attain more knowledge on how to invocate and on whom to invocate. But the main basics for writing lyrics are: the inborn character, the hungry spirit and experiences we made due our lifetime.

How did you get in touch with occultism and the symbolic connected to it? What does make them part of your life?

I have felt, seen and heard things that other people will never be confronted with when I was just a child. That makes me believe that all that I am is a result, or let’s say the sequel of something that I have begun in a past existence. There is a hunger inside of me, a hunger for knowledge and an ambition to liberate my spirit from this recurring cycle of getting reborn into a limited kind of existence. We walk step by step to an existence that will take place on higher planes. That should be enough.

What is black metal nowadays? How do you judge the situation under the aspects of music and attitude?

Superficial! Unfortunately! Huge parts of this scene act behind a false front that is easy to penetrate. The music has evolved, but this is not always a positive aspect. I do like the rawness of the older records, because it seems less predictable and has a darker, more mysterious aura and atmosphere.

In the 90s the black metal scene was almost concentrated in Scandinavia, if we consider evolution and the names that pushed is. The German scene could establish itself until becoming very important and bringing also pure and fresh passion in the black metal panorama. Are there bands that you particularly esteem or you specially enjoy to play gigs with?

Yes, the German scene developed. However, that is not important for Chaos Invocation. German bands that I personally respect a lot are Katharsis and Ascension. Apart from this bands a concert with Celestial Bloodshed (I know that this is not a German band) could have been something special. Anyway, that’s not possible anymore.

What sort of world represents Chaos Invocation? How similar or different is that world to ours in which is the live is dictated by medias presenting opinions ready to eat?

Our lyrics should be a sufficient answer.

How is Chaos Invocation live? Is there a performance that was particularly amazing: public, your work, etc.?

One concert (part of the Living Darkness tour) in the south of France. The people went completely insane and the whole place was filled with pure energy. I have never experienced something like that before. Every concert should be like this.

Did you already present your new songs on stage? If so, how were the reactions?

Yes, we have already played some of the new material on stage. We are still an unknown band, so the reactions are always nearly the same (let’s say restrained), because people do not know at least one of our songs. Ask me again when we release our third record.

Chaos invocation & World Terror Commitee are still together. How it is to work with Sven? How did you get in touch with the label?

It is very satisfying to work together with a label that completely understands the music we play. Until now we have experienced a lot of support in all things we do. The World Terror Committee is probably the most satanic label overall. We got in touch with WTC in 2006. We send a three song rehearsal and ended up with the assignment to record a complete album.

What do you think about marketing projects like those of Watain or Immortal, probably pushed by their labels, of offering blood covered posters or deluxe versions which are not worth the money? Do those musicians still believe in what they’re doing?

I am not in the position to judge this. Presumably they still believe in what they are doing. I don’t follow bands like Immortal anymore, but you are probably right with your statement, that deluxe versions are for the most part way too expensive and do not justify the price.

How are the days of the members of Chaos Invocation outside of the band? Which are your passions, hobbies that enrich your days?

This world seems to be full of hectic and stress which one cannot escape from completely. We have to go to work to earn money, but we have found a balance to this.

Tell us about projects in a short time:

The most important event for us the release of “Black Mirror Hours”, which will take place in December. Furthermore we are getting footage stuff together that will be released in one way or another, but in any case for free. A tour is not planned yet.

That’s all. The last word is yours for greetings, cheers or to leave a message for our readers…

Visit www.chaosinvocation.wordpress.com from time to time to get the latest news.