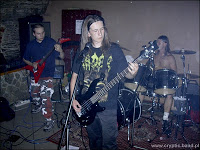 Hi guys, welcome on Aristocrazia Webzine. May we have a short presentation of your band?
Hell’o! We’re CRYPTIC from southern Poland. Band was found in 2000. After many changes in line-up we have recorded Demo CD in 2004 and now LP in 2009/2010. Throught all the time we play deathrash and we’re not gonna change our style
Which is the main cause that pushed you in giving birth to this project?
Probably 10 years ago Piter and Paulus realized that just listening music is not enough, haha. In my opinion if you really like and feel music, you want to be part of it and become creator. It’s natural to have something to say instead of being listener.
I have listened your album “Infinite Torment” and i think so cool. Which are tha bands have influenced your sound?
Many people say they can hear some of Vader, At the Gates, or Death in our songs. I can’t disagree with them in 100% but we’re not about to create new genres or experiment. Playing what we like the best (and what we would to hear) and having fun during it is our point
How do you write a song?
Usually we come to rehearsals with ready basics of riffs and beats and we put it all together. All songs are prepared as tabs before. Playing new songs on gigs is good way to see ‘how it works’ before recording. Big moshpit means that song is good.

Tomash is repsonslible for all lyrics. They’re mainly about necronomicon stuff, internal laceration, wars and other soul and spirit diseases. They’re not too happy, are they? Soon we’ll launch our official website, all lyrics will be avaiable there.

Polish scene is really full of bands, where you stand with other bands and how you live?

Yes it is! Polish scene is one of the strongest metal scenes in the world. There are plenty of bands around, both famous and underground. Having friends is very helpful during organisation of gigs and events. Lesser bands help each other and that’s really cool. In this sort of music there aren’t any competitions or rat races, it’s all about having fun and keeping people interested in what we’re doing. Speaking about other bands – check out 666th Panzer Division founded by members of Cryptic – Tomash and Kacper.
How are you promoting the album?

Official worldwide premiere date is around 1th of July by ukrainian label – Metal Scrap Records. Currently we’re setting up dates of polish tour. We’re also hoping to play some gigs abroad in Czech/Slovakia/Ukraine and in every place where we can meet fans of our music! We’re also cooperating with undergrounds medias and promotion agencies. Soon after official releasing of this LP we’ll send it to every newspaper and zine on planet, hahah.

I think it’s stronger and bigger than ever. It’s different than oldschool 80’s and 90’s climates but with such a wide choice of genres you can be sure you’ll find something interesting. New albums of Immolation, Dying Fetus and younger bands like Hour of Penance or Sickening Horror show how far are we from death metal’s boundaries, if there are any. Short look on line-ups of biggest festivals and numbers of people who are coming up there explains everything!
What kind of relation do you have with your supporters? What do you think of virtual communities and social networks?
You found us on Myspace, so you know something about it for sure, haha. It’s absolutely necessary to use communities like Myspace or polish Muzzo. With it you can reach more listeners and meet more people who can help you in many matters. Media partners work in the same way. You can expect reviews, interviews or just couple of good words. It really helps.

Every gig is different and unique. I wouldn’t repeat particular performance but we often come back to places where venues are fine and crowd goes mad. My favourite cities to play are Cracow, Wroclaw and our home little town – Mszana. Couple years ago we took part in one of open air events called Metalowa Twierdza (Metal Stronghold) in Nysa and that was absolutely awesome.

Were you already working on new material?

Yes! Until today we have ‘skeletons’ for six new numbers. We started work with them couple weeks ago and I think they will kick some sinless asses, hahah. They’re (songs not asses) bit more intensive than others. During holidays we’ll try them live and record another LP as soon as possible. This year maybe.

Hopefully! When winter lasts 6 months we have no other plans than going to Italy, haha. To see Fleshgod Apocalypse or Illogicist I LOVE them. If we receive any offers or find people to cooperate with why not?

Thank you for your interest and support! Check out our websites, ,drink beer and stay DEATHRASHED \m/
Facebook Comments