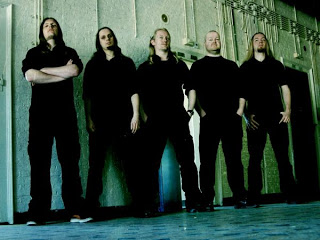 Last year we knew them with the ep “Destructive Capacity”, now they are back with the debut album “Parasites Of A Shifting Future”, they are Disintegrate.

Let’s begin telling us something about you, introduce your band please.

Disintegrate is a melodic death/thrash metal band, from the north of Holland. It was formed in late 2005, but, we’ve been playing with a steady line-up since 2009. Jos Hindriks and Leo van Leijen on guitars, bassist Sander Stegeman, drummer Joran Dijkstra and myself, Danny Boonstra, on vocals and keyboards.

We kept in contact through Myspace, I knew about the release of the debut album in summer, why was it delayed?

It’s kind of a long story, so I’ll try to sum it up a little. We started recording in February 2010 and the entire album was fully recorded in March. The album was scheduled for a May release. Unfortunately we encountered a lot of difficulties in communicating with the producer we hired. He did not deliver the album on time and in the months after that, a lot of promises were made, but none were lived up to. Finally in July 2010 we decided to fire him, re-record the drums and find a new producer. Fortunately, Jord Otto was available and willing to take on the job.

In the review I took account of the fact that you started from where we left you, finding the tracks of the ep was a good discover for me, is there one which you are binded to more than the others?

For me, “Shatter Them” is one of my favourites. It’s a very tight, fast and compact song that has all the features we consider to define Disintegrate. And I think “Twist of Faith” has grown to be our live hit over the years. We simply need to play that song or we will be lynched. So I think we will be playing that one for a long time.

Modern, heavy, sometimes refined, other times just full of anger, “Parasites Of Shifting Future” has many faces, how much hard was composing it and which were your main inspirations? Do you have homogeneous listenings or the musical backgrounds of the members are different?

The album was composed over the years. Some songs even date back to the early start of the band, so it was not very hard to get this album together. In general our main influences, musically, are Swedish bands such as In Flames and Dark Tranquillity, but there are also influences from bands like Death, Kreator and Lamb of God. These are all bands we like, but every member is influenced by them in a different way, and take that into their way of playing. Lyrically, we are influenced by everything around us, media, politics etc., but also events from our personal lives.

Danny sings and play the keyboard, why did you decide to insert them? Did your sound and your melodies need more ambience?

When we started writing songs, we had a few parts that were screaming for some keyboards, so we decided to try that in the rehearsals. That worked out well and it’s been a part of the band ever since. But it’s all to serve the song. There are songs on the album that don’t have any keys and some that have a lot. Whatever works best for the song.

How were the collaborations with Jord Otto and Claudia Edwards van Muijen born?

Jord is the guitarist in ReVamp, but we know him from a local band The Blackest Grey. When we were looking for a new producer, our bassist Sander suggested Jord. Sander had worked with him for the debut album of Posthuman, of which Sander was a member at that time. While he was producing the album, we agreed that a riff needed a solo and asked him to play that. He did and it sounds great.
As for Claudia, we had written this song and really wanted to add some female vocals to it. We know Claudia from another local band, Lyonite. We’ve seen them play live a couple of times and we were impressed with Claudia’s voice. When we asked if she wanted to be on the album, she didn’t hesitate and came over straight away to record her vocals. And we are very happy with the result.

When the album was ready, what did you surprise? Did you think that you finally got it how you wanted to be?

I think we are all very satisfied with how the album turned out. Especially the song with Claudia is something that surprised us. The song was written just before recording the drums and we had not played that song as a band yet. We did not have any vocal lines, before Claudia and I recorded it and made it up as we went along, so we kind of took a gamble with it. But in the end, it turned out great!

How are you promoting the album? Will you make a tour?

We are working on some things, but it’s still too early to go on the record with anything. Hopefully we will get the chance to promote the album through our live shows. The album sounds good, but we are still more a live band then a recording band.

Your national scene is one of the greatest in metal, do you have some friend band? Which are the ups and downs of the scene?

The Dutch metal scene is packed with great and talented bands, but not a lot get the exposure they deserve. It’s very difficult to get live shows, because the scene is so crowded and venues try to save money by booking cheaper bands. So I’m glad that bands like Izegrim get signed to labels, so they’ll get the attention they deserve.

Why are you attracted by metal? And what, in your opinion, is needless of it?

I grew up with rock bands from the 60’s and 70’s, Deep Purple, Black Sabbath, the Who, that sort of thing, and it evolved from there. I like the combination of aggression and melody. It’s something that works really well for me. But I can enjoy various genres from time to time. I do think that the market is getting more and more saturated.

We always hear about a bad era for lps and cds, it is filesharing’s fault, and also is the fault of people who treat art as a fast food product. What do you think about it? Will we hear just a sequence of 01010111 in the future?

Obviously this is a problem. People don’t seem to really listen to music as we used to and good albums get lost in the crowd. But I think we see a shift in distribution. Bands release their albums themselves, charge less and even offer it for free on their website. We’ve done the same with our EP.

Today for every band is important to have a web of contacts to make people know your music.
For the big names it’s not a real problem, but for the young bands it is. How are your contacts with your fans? Besides social network, do you keep in contact with some of them?

We try to do special things for our fans. For this album we made a limited amount of dvds, with a live show and other extras, for those who pre-ordered the album. We also keep our fans updated through social media on what we are doing. It’s important that they feel somewhat connected to the band, so when we’ve done a show and someone wants to ask us something, we take the time to talk to them. You are no bigger than the fans make you and it’s good to show some gratitude.

Which is the experience which made you love music so much that you wanted to play? And why did you choose this genre?

I grew up in a musical family. Both my parents played in bands and are still musically active. But when I visited my first metal festival and saw that big stage, I thought: “this is what I want to do”!

Do you have any live show with another band that you’d like to repeat?

Our first big show was as support of Sepultura in our hometown and that was the show that got it all started for us, so we look back on that with great pleasure. And our first big festival was Waldrock, playing with bands like Carcass, Trivium and Killswitch Engage. That certainly got us hungry for more.

We don’t know yet, but we definitely want to come to Italy, someday!

Thank you for this interview! We hope everyone will enjoy our new album and we hope to see you somewhere on tour. We are ready for it!

This website uses cookies to improve your experience while you navigate through the website. Out of these, the cookies that are categorized as necessary are stored on your browser as they are essential for the working of basic functionalities of the website. We also use third-party cookies that help us analyze and understand how you use this website. These cookies will be stored in your browser only with your consent. You also have the option to opt-out of these cookies. But opting out of some of these cookies may affect your browsing experience.
Necessary Sempre abilitato