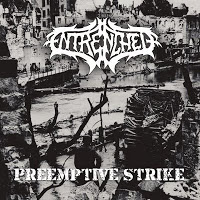 Here we are talking to Entrenched, two-piece from New Jersey whose debut “Preemptive Strike” I had the pleasure to listen to and to review. Since these guys are really kind, we take advantage to meet them.

Well, apart from what I wrote in my review, yours is the pleasure to talk directly to our readers: what do they have to expect from Entrenched, how do you define the band and your music; let’s say, introduce yourself.

Charles: I’d say we’re a band with no frills or bullshit, just straight up in your face metal, I think people can expect every song we write to be rocking.

Tell us of the genesis which brought to this war machine: how did the project came to light?

Basically I was looking to form a band, Sean was a long time friend of mine so I gave him a call, he had the idea of taking on an old school death metal sound which I also wanted to do, and Entrenched was born.

“Preemptive Strike” is your first product; no demos, no eps, no nothing to pave the way to the album, which came out without any contract: has the absence of a label been a conscious choice, a chance or a necessity?

We wanted to get straight into the action, we had been in bands before and have had them disintegrate before we really had anything to show for it. So this time we wanted to get the album out immediately, it worked out because the label Horror Pain Gore Death Productions has picked us up and will be re-releasing August 30th.

Where do your main inspirations, musical and lyrical, come from? Personally, speaking of bands, I hear much of Bolt Thrower and the “classic” american death pioneers in your sound, but there is much more, though…

Yeah Bolt Thrower is definitely an influence, I think more so in the aesthetic than the music. We have a lot of influences its tough to pinpoint them all, Obituary, Ghoul, Terrorizer, Sodom, Napalm Death, Benediction, Entombed… and many more.

The band is composed of two elements only, are you planning to stick to this way? I am asking this because it leads me to a typical question: any tour and/or live dates on schedule?

We like the two-piece set up but obviously yeah it doesn’t allow us to play live, we’re looking to have some session members for live shows and you know if we get a could dynamic its not impossible to say we could add more full time members. With that being said though we’re looking into some shows in New York City and Philadelphia for the fall and winter.

Just these days, while I am working on these questions, I notice that many blogs and sites are publishing interviews they had with you; besides your already mentioned kindness, does this mean your full lenght is having its fair success? Are you satisfied with the responses your work had? I understood you are about to sign a contract, which is but a good sign…

Yeah the feedback as been great, I really didn’t expect it to be this good honestly. The album is doing well and hopefully continues to pick up steam. As I mentioned before yeah we just signed to HPGD productions so you can look for the album to release through them and possibly more in the future.

Still talking about “Preemptive Strike”, now that the works have ended for a while, are you pleased with the result, both in a personal and musical sense?

Very pleased man, we put a lot of hard work into that album. It was very emotionally and physically draining creating it. I think it will be a tough one to top but we do have about 5 or 6 new songs in the works which are stacking up pretty well.

Completely different topic: do you have side projects or are your efforts totally involved in the Entrenched tank?

No sir no side projects to speak of. Entrenched takes up enough time.

What can you tell us about the underground scene in your area? It does not happen that often to hear from placid New Jersey, speaking of extreme metal.

Yeah New Jersey is rough for metal, old school metal I should say. There’s a big scene here for slam bands but you know we don’t really fit into that mold. There are definitely fans out there I mean you go to the shows in NYC and you see lots of people, many from New Jersey. Regarding bands though there just aren’t that many.

Indiscreet question with which we come to an end, for curiosity’s sake: the five albums you cannot live without?

Thank you very much, we hope to have soon news of yours, and yours are the last words.

Thank you man! It’s our pleasure to do the interview. Look out for “Preemptive Strike” on HPGD Productions August 30th and also some new merch very soon!