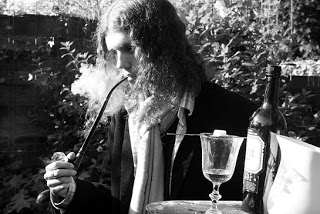 We are today in company of Ruben Wijlacker, creator of the project Folkstorm, which we reviewed the second job “Valavond” (you will find the review in the site), then we take the opportunity to deepen the knowledge about him.

Hi Ruben and welcome to Aristocrazia Webzine. Let’s start by talking about why you founded Folkstorm, what was the driving force that made you take the idea and what artists have influenced you and influence you now?

Hi, thanks. I started Folkstorm back in January 2009 as an ambient project after ending my previous band. I recorded two songs around that time which later ended up on the first full-length album (“De Stemmen Van Het Woud & Elfenliederen”). About a month later I somehow started to play black metal again, and the ambient and black metal sound kind of blended together, which resulted in the first Full-Length album, ”De Stemmen Van Het Woud”. The reason I started Folkstorm was because I felt like I needed some kind of escape from contemporary society. I feel out of place in today’s world, and I felt the need to create a world of my own; somewhere I would feel comfortable. I am inspired by bands such as Burzum, Ulver, Agalloch, Drudkh etc. Music isn’t my only source of inspiration, though. I have been inspired by many movies, books, paintings or even things that happened to me in my life. Too many things to mention, really. Especially my second album, ”Valavond”, has been inspired by my personal life, rather than by other bands. It’s a highly personal album and i’m really proud of it.

From what is derived the choice of monicker Folkstorm?

I got the name from the album ”Folkstorm Of The Azure Nights” by the (rather politically incorrect) pagan metal band Temnozor. I’m not a huge fan of that band, but I heard their album once and the name Folkstorm really appealed to me, and in my opinion it totally fits my music in many ways.

I heard your two jobs, starting from the debut “De Stemmen Van Het Woud”, and I noticed an obvious and overall improvement in the sound. What resources do you rely on to give life to these two albums? The composition too is more fluid, have you changed your audience?

There are quite a lot of reasons why both albums sound differently. First of all, I have progressed a lot as a musician. I have experimented with new styles that fit the concept of my new album and I have used many layers on ”Valavond”. It takes quite a lot of time before you really know what’s going on. Secondly, the production has changed because we recorded this album in our own studio with better equipment. I’m not much of a production freak, but I think the production fits the new album quite well. I don’t really think about an ”audience” when i’m writing music. I just write what comes naturally and I don’t care much about who will like it or not. I mainly write music for myself. The audience is less important. I think that people who really understood ”De Stemmen Van Het Woud”, will enjoy listening to ”Valavond” as well.

The line, almost soft, in some passages he pulls out a post/rock flavour. Black metal is increasingly contaminated and “bastardized”, could this be the definitive (and unknown) nature for his future?

I don’t quite understand your question, but I have indeed used some ”softer” parts on this album. I think the contrast between the cold and agressive black metal and the softer clean parts totally fits the concept of the album. When you use quiet parts in your music, the loud parts will strike you even more and vice versa. I’m not doing this for any reason other than that it feels good to me. The third album will be different. Every Folkstorm album will be different.

The platter offers more than a pleasant song, for example I think of “Nachtlied”, which in several times brought me to mind (albeit distantly) Altar Of Plagues. Had you fixed a target in terms of sound? How your song born?

Not at all. There is no musical target in the writing process of my songs, only an aesthetical target. I don’t quite get why you think it sounds like Altar of Plagues, but if you want to compare, that’s fine with me.

How do you combine the lyrics with an instrumental part? What are the topics you want to treat?

I always write my music first. I think of a certain feeling or landscape and I start writing a song. When the melodies are done, I sit down and write the lyrics. My lyrics are mainly about loss, depression and nature.

The world music scene is invaded by solo-project, they have always been and probably always will be. What are the reasons that motivated you to move alone these steps?

Metal, with the electronics one, is the world where these “bands”, perhaps we can call them atypical, have definitely found the most fertile ground. If you were to think of men who have made a significant breakthrough to this way of making music, what are the first names that come into your mind?

I have no idea.

Netherlands has always been a nation that has a strong link with the extreme landscapes, both the death metal fields and the black metal fields have had and continue to have their own historical representatives, what are the formations belonging to your national scene, in past or present, that for some reason have particularly impressed you?

I’m not a big fan of Dutch metal, but my favourite dutch black metal band is probably Urfaust.

Internet is the most powerful, effective and fast way to make known their works, how are you using it? Social networks are really useful, or have they proved to be mostly a collector of timewaster and porno-researchers?

Like everything, internet has it’s positive sides and negative sides. I usually spend my time online looking for music and stuff like that. I don’t care much about how other people kill their time.

You can find “Valavond” in free download on the official website (www.folkstorm.nl/). Have you received any comments/opinions from guys who have taken advantage of this opportunity?

The criticism, in general, as have treated the material?

I don’t care much about criticism. One review I found online even said Folkstorm was a wannabe cascadian black metal band. That just put a huge smile on my face. The guy obviously didn’t get the point of my album.

Folkstorm will just be a studio project, or have you thought about a possibility of live performances, perhaps supported by guest musicians?

Live performances will probably come sooner than you think.

In one of the many pseudo-press articles supported by some kind of clumsy study of metal culture, I read that those who listen to genres that give life to this universe musical, they risk depression, a bit as the cliché that who play black metal is a satanist, or if you listen death metal you will be the next Jack the Ripper and so on… Why, in your opinion, people persist in condemning this art, hitting it with a continues chant of stale cliches?

Probably because people in general are stupid. I’m sure black metal can be rather dangerous to some people. It kind of depends on who’s listening to it. That doesn’t mean it’s dangerous to everyone, though.

What are your listening outside the metal world? And your extramusical passions?

I love many styles of music. I don’t like to limit myself to a certain genre, so I pretty much listen to everything I like. Black metal and ambient will always remain some of my favourite musical genres, though.

To date, what is your perfect disc? The one you can not do without.

“Lift Your Skinny Fists Like Antennas To Heaven” by Godspeed You! Black Emperor, “Hvis Lyset Tar Oss” by Burzum and ( ) by Sigur Rós.

How will be the perfect album of Folkstorm?

Any honest album is perfect in my eyes.

Projects for the future?

The interview is over, thank you for your availability and I leave you the word again to close the conversation as you prefer.

Thank you for the interview. You can download my album on www.folkstorm.nl Please donate if you like what you hear!