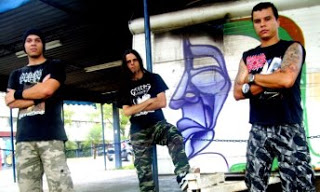 After ten years of activity in the underground scene, the Brazilian band Gestos Grosseiros continue to love and produce old school death metal. Thanks to Andy I had the chance of reviewing their works, you will find them on our website, now let’s talk with them.

Andy: Hell-o Gabrielle and Aristocrazia Webzine. It’s a honor to Gestos Grosseiros participate in this. interview. I’m fine and another members too.

2012 is already finished, how did it go for Gestos Grosseiros?

Andy: Well, the last year (2012) was very good for Gestos Grosseiros. Made many shows in Brazil and played by second time in Chile. We had opportunity of the spread our song to many people here and another continents as Europe for example.

Who are Gestos Grosseiros, why this name, how was the band born and how did it change during these years?

Andy: Gestos Grosseiros it’s a simple name and do not had a meaning special. Sometime the people think: OH!! Gestos Grosseiros = fuck you (hahahaha) but it’s not true. The band was born here in Guarulhos city (São Paulo) in 1998 and I can said for your that today, we are more professional and the Gestos Grosseiros had a status in the Underground scene.

How did you discover your love for metal?

Andy: Look. I discovered my love for Metal listening Kiss, Kreator and Metallica, maybe, 20 or 21 years ago. After, met Morbid Angel and Slayer.

Dill: Difficult to point a specific date, but around 14 years old, listening Metallica – “Master Of Puppets”.

You love thrash metal, right? Which are the five albums that you consider fundamental?

Andy: Sure, we love Thrash Metal and here our opinion about any albuns: “Master Of Puppets” and “And Justice For All” (Metallica) , “Coma Of Souls” (Kreator), Ratos De Porão from Brazil and “Rainning Blood” (Slayer).

Which was your first contact with death metal? And which is the album that made you think: this is what I want to play?

Andy: Kleber and me, started togheter to listen Death Metal w/ the bands Morbid Angel, Cannibal Corpse. Well, I believe that not had a album special, but many albuns of Morbid Angel.

Dill: My first contact with Death Metal was not very nice. To tell the true, I didn’t like that. I remember that was Krisiun. But, a time after these, when I listened “Once Upon The Cross” – Deicide, I think: It’s amazing. But, play Death Metal was a consequence to know these guys. Before Gestos Grosseiros, I’ve play in a Heavy Metal band.

Drummer/vocalist, a double position quite common in this genre, I think about Chris Reifert from Autopsy and Mike Browning from Nocturnus. Which are the main difficulties in doing it, both about composing and playing your tracks?

Andy: To tell the truth Gabrielle, I had any difficulties in the started but now do not had more. I got a good adaptation with our sons. But sometimes it’s a necessary caution on stage.

Your line-up in “Countdown To Kill” was made by four members, in “Satanchandising” you were just three where you and Kleber at the guitar were and still are the storic members, did the way of writing the songs and the lyrics change during these two albums?

Andy: Well, the way of writing it’s the same in “Satanchandising”, because when Danilo Dill joined the band, the song were almost read. We just adaptations. The lyrics follow the same ideology against religion, power, hypocrisy and greed. This is our philosophy.

The cover for “Satanchandising” (I suppose it is a word game, “Satan” + “merchandising”) represent one of the worst problems of humanity, the power of religion, and a song such as “Religions Plague” adds to it. Which are, in your opinion, the problems created by the economic/politic power of the servants of some so-called God?

Andy: I think that power religious/economic/politic it’s a shit in general. People died trying serve theses factions, family are destroyed, there hungry, misery and wars around the world. All this, because of greed. You know, any had much and another, nothing. With sincerity, today, the religions and the politic are togheter, in the game of power.

“Stronger Than Ever”, together with the cover of “Extreme Aggression” by Kreator at the end of the second album, seem to tell people to hold on and to not give up, is it right?

Andy: No no, are only in the end. But it’s a good interpretation your.

If you had to prepare a set-list for a live show taking the songs you consdier the most explosive ones from both your works, which tracks would you choose and why?

Dill: “Humanity Victory”, “Mirror Of Death”, “Lord Of The Lie”, “Predator Of Soul”, “Countdown To Kill”.

Andy: The set is good, but I add “Slaves Of Imagination”, this song it’s killer.

How is the situation about live shows? Did you play recently?

Andy: Finish our brazilian tour 2011/2012 and our second chilean tour. This year, we had little shows, because we are composed new songs for third album.

Is there a live show you’ll never forget? And a funny anecdote you’d like to share with us?

Dill: For me, our show in Brasilia-DF was amazing, was my first time out of SP for presentations. Funny fact: there are many ones, always when Me and Kleber drink a lit more. In São Paulo, playing with Into Darkness, I was trying to talk with Mark (Into Darkness bass guitar), but the communication between us was difficult. After I drink some beer and Mark drink some Whiskey, we were talking too much, there inst no one problem on the communication.

Which are, besides the usual names, the best bands from the Brazilian metal scene?

Andy: Krisiun and In Torment and Anarkhon.

What do you think about the metal world? Which are the ups and downs of being part of it? Are there any attitudes that you can’t stand?

Andy: We think that Metal of the world grew, with many shows and bands. The internet facilitated for all, but only the true are survive.

One of the trends today is about labels that make deals with abnds with no albums released and making them release a debut which often sounds medicore, meritocracy never existed and rising through the ranks is useless, so paying is enough? Is there the P.T.P. (pay to play) in Brazil too?

Andy: Yes, unfortunately this is a true here, but in another countries too. However, the Gestos Grosseiros never, never will be accepted this. A band that pay for play, do not have our respect.

Who is Andy Souza outisde the band? What do you do in your life, which are you other passions?

Which are the intentions of Gestos Grosseiros for 2013? Maybe you’ll come here in Europe for some live show?

Andy: We will composed new sons for recorded third album and a european tour, maybe in 2015, after launch this album.

So the interview is now finished, it0s been a pleasure to have you on our website, I wish you the best and I leave the last message for out readers up to you…