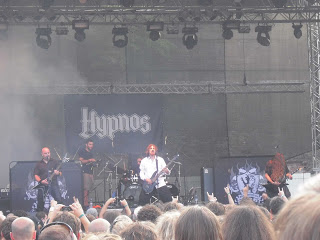 We are glad to be with a part of the European Death Metal’s scene: I’m talking about Bruno Kovarik, formerly in Krabathor and now leader of Hypnos, one of the many good underground bands of Eastern Europe. How are you?

Ciao Gabriele. Thanks for your question, we are really fine these days.

Since there are people which don’t know your band, let’s begin giving some infos about its birth and evolution up to now.

HYPNOS has been found at fall of 1999 year when, after 14 years, I decided to leave my band KRABATHOR. I asked drummer PEGAS, who used to play in Krabathor as well (He recorded „LIES“ CD) to join new band and since that time we released 3 full length CD´s on German label MORBID RECORDS (R.I.P.) and played cca 250 shows all over Europe, including Eurotous with MORBID ANGEL, PUNGENT STENCH, BEHEMOTH, VADER etc. That´s really raw bio, more detailed info anyone can find at www.myspace.com/hypnoscz.

How is returning after 5 years of stop with Pegas, with which you have already shared many adventures?

There is kind of brotherhood between me and PEGAS, we never stopped our contact even when we were not active in the band, we have been visiting ourselves eachother a few times in the year (I live in Czech Republic, he lives on Slovakia, but not too far away from me), we are in daily touch via e-mails, sms etc. We relate to eachother on personal and also on musical side. I really care about PEGAS to be HYPNOS drummer because we are going the same musical direction and his drumming is pretty unique and gives original mark to HYPNOS.

The new ep “Halfway To Hell” is a classic Death Metal work well-played which doesn’t look out of place with all your past releases. How was it born? And how do you write your songs and your lyrics?

I prepare raw structure of the track, all riffs etc. by me at home and when I come for rehearsal with PEGAS, we just finalize works on arrangements etc. It is the way we used to work in the past as well, we still do not use computers for composing, we still prefer personal touch and rehearsal. All recording equipment we used when composing was old tape player and cell phone, nothing special. Lyrics are completely written by me.
When we decided to rehearse again after 5 years, we did not have any plans…we just wanted to have a fun with playing together again. But we composed “BURNING AGAIN” on first rehearsal during 2 hours and therefore we decided to do 2 more songs and go to studio to record promo. Later we recorded another 2 brandnew tracks and released all songs as MCD “Halfway To Hell” on Czech label Crystal productions.

The idea of covering a song by Dehydrated is a bit emotional, since Pegas was involved in this band? Or are there other reasons?

It wasn´t the main reason although DEHYDRATED was first band of PEGAS. We both liked that stuff, I guess that their mastermind Brano had really good ideas and riffs and their songs definitely deserve to be reminded. We also wanted to support our home band, to promote Czechoslovakian scene.

I noticed (it was impossible to ignore it) the writing on the artwork “”Sacrilegious Since 1999”, it’s like a signature which assures your dedication on that way, can we say that it’s a trademark?

More or less, this is the definition of our philosophy. We always refused any kind of religious beliefs and this declares that with no doubts.

In these ten years you had many line-up changes about the guitar and also there have been many guests among which I remember Mika Luttinen and Rene “Hirek” Hílek, he is an ex-Krabathor too so he knows a lot about line-up changes. Is it so difficult to have a stable line-up?

It is true we had too many changes on guitarist position. Actually every album of HYPNOS was recorded with different axeman and honestly, I am not too happy about this fact but I want to join the band only with the person we will be very close personally and musically. It is not easy, even when you are older and you do not have the mood for too many compromises. When I say “band”, I imagine one body, united persons that have always something to say when you are partying or practising and you like to be with. Currently it seems there is one person very close to be our permanent third member.

How do you feel being on the Metal scene for so long?

Like I would never left the scene, I was still keeping an eye on bands, new albums, I have been still listening a lot of music, visiting concerts, festivals etc. This is my life, my family, I feel really good there.

I can’t avoid asking you about the golden nineties era, you lived them with the first class band of Christopher and you continued your work creating your new personal band, which are the main differences between the two bands and what do you miss about the past decades?

KRABATHOR was a band made of true enthusiasm and will to establish ourselves worldwide. We were the brothers, every day together, living just for the band. When we grow up, we find out that we wanna go different directions and we had to split our ways. Now it is more about fun, enjoying ourselves, experiences etc. I enjoyed all periods, each one of them is unique in some way. Therefore I wouldn´t change anything, every decade brings something original, positive….it is important to see those positive aspects and go for them.

Your new ep shows that you really want to play music, do you think you are a “more mature” musician or you are always the same?

I hope we are more matured. I am 25 years on scene and I wanna make use of all my experiences. I wanna “sell” the best of us. Anyway, I am pretty sure our upcoming full length album will be even better in this way.

Have you already received any comment on your ep? What do the critics and the fans think about it?

I have seen several reviews on Czech webzines, they are all positive… the main handicap is probably that we used material from 2 recording sessions and sound little bit differs. As I explained above, it was due to the reason we wanted to record promo first…we did not plan to publish that at all.

What do you think about the today music scene? Are there any young bands that you like?

Sure, there is always a lot of bands to like. Some names I haven´t been to familiar with and I like a lot now are for example DARK FORTRESS, GOJIRA, DEATSPELL OMEGA, PAGAN´S MIND, BARREN EARTH…. I know they are not new bands but anyway, it is the younger wave in extreme music.

Death Metal, as all the rest of music, is an art form, did you see any changes during these years, both about the attitude and the compositions which made you think: “What the hell is this?” ?

Of course, also death metal improves, goes thru some kind of development. Personally I am not too happy about too many technical bands with absolutely perfect skills, sound etc. but with missing feeling, choruses…..they create machine sounding riffs but their songs do not live, do not breathe, do not make your brain to sing choruses etc. But generally it is of course good that there are still many extreme metal bands and people involved in this music.

Internet vs tape trading, magazines vs webzines. The web world against the old school metal culture one, when people used to buy an album without knowing anything aout the band. Is one better than the other or do you think that the modern world have to learn the good things of the old one to allowing the bands releasing stuff not just in mp3?

Every time period has some typical aspects, and we do not stop the progress. I also do not like too much the estranged attitude to music generally (thru all musical styles) when we miss the personalities and something…what simply lasts….. I guess that tape trading and written letters were more personal and made the people more into the problematic. Internet makes things much easies, colder, faster…. We have to adapt to this situation and survive.

Do you have any unforgettable live performances which striked you, both in a positive or negative way?

Hard to say, we did a lot of great shows including the last one, out reunion show at Czech brutal Assault festival last month, that was really awesome, thousands people in the crowd banging…. The negative one, maybe our last show before we split up back in 2006 year. It was in Giessen (Germany) on tour with Purgatory and Centinex. Our guitarist had some troubles with cables that affected our show completely, that was….how to say…sad end of career.

Not really to repeat, I do hope we will play even many great shows. I always wanted to play together with EMPEROR once. Since this band does not exist anymore this will probably remain as a dream. We also always had a great time touring with VADER or BEHEMOTH and I hope we will play with them in future again.

Will we see Hypnos in Italy? There is a confirmed tour, do you want to remember to our readers some dates?

Unfortunately, there are no dates for Italy booked at this moment….actually we do not plan to play too many live shows. Our upcoming shows are all booked for Czech Republic, all dates will be really special events and we are looking for that.

Thank you for the time spent with us, the last message for our readers is up to you.

Check out our website: www.myspace.com/hypnoscz.
You can find there all news about the band and also new merchandise.
Regards.