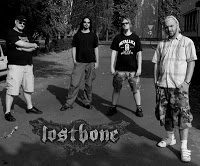 I listened to several times your last album, “Severance”, and for me is a cool missile of thrash/core, as you describe it?

Thanks. Well – for me is some kind of mix of simplicity and straight to face attitude of hardcore with thrash riffs and death metal speed. Proportions of these elements change from album to album and also between songs, but for me this is how it is. But I must add that choosing the genre of what we play is not the most important thing for me. We play what we feel and thats it.

There are phrases that link to death metal, some thrash, some recalling the melodic. How was you create the album? There were bands that influenced you to compose?

Yeah – as I said, we play kind of combination of all that. Writing of the album took us almost two years. But it was so long also because of the line up changes, so we didn’t want to hurry. It all went very naturally, with no pressure at all. I don’t see any bands that influenced me and us to compose. I think all the music that we grown up on, is still somewhere in us but the list is too long to count here.

Only twenty-two minutes of pure energy, the choice of a life so short was made to point on the adrenaline and impact?

Twenty-two? Come on – “Severance” album leasts sth around twenty-nine minutes. But still – egzactly as You said – we felt that this is the best runnig time for music that we play. We play very intense and straight to face music, so we want the album to be a strong and fast shot. It’s better to make people want to play it again than to make them bored before it’s end. The other thing is – that we just felt that these twelwe songs make this album complete. The same as music – it came very naturally – we just felt – OK – we have the album.

How do you write a song?

As we have only one guitar player in the band – and it’s me – and we play quite guitar oriented music – it used to be that I bring some new riffs or songs skelletons and then we work on them together. All of us put on the table the ideas and we try to make all the songs the best we can. There is no one pattern of writing. Sometimes I bring the whole song and it remains this way, sometimes we start from Mike’s bass riff and build the rest from it, sometimes Jonny or Barton sing the riffs or sugest how it could sound. In the end – all the patterns are good if it ends having a good song.

The lyrics are mine part in Lostbone but I think that the rest of the band is OK with the content and themes. Well – it’s hard to speak about the lyrics in general, cause each single one has different thoughts in it. On “Severance” album there is kind of main idea that appears in couple of lyrics but in a different way. It is about how to live your life your way and not let the world around change you to sth you are not and don’t want to be. This is the resist to society, religion, politics or anything else that wants to change people to numbers – parts in their machines that don’t think – just obey the rules. The other themes are the punishment, war ect. If you want we can talk about some songs.

What can you tell us about metal in Poland? Can you suggest us some bands coming from your country?

I think that from the early 80ties or even earlier we have preety strong metal scene, and for many years there are polish bands in the worlds first league like Vader, Behemoth, Decapitated, Riverside. We have many great bands here, but it’s not so easy to appear outside Poland. There are no big money here in this kind of music and You need to have a good promotion if you want to be on the same level with western Europe or US bands. Unfortunatelly to play the good music is not enough – you need to be able to make people hear about you and have the oportunity to listen to your music. But we are optimistic – we do what we love to do and try to do it the best we can and it slowly brings the results – we’ll see what happen.

It’s great. There is so many great bands and great albums every year, so many tours, shows, festivals – come on – it’s fucking good time for heavy music. Maybe I’m personally a little more into the older bands that I grown up on, I mean bands from 80ties and 90ties but they are still kickin asses. The sad thing is that many great musicians is no longer with us and this year started preety bad with that – Peter Steel, Dio and now Paul Gray. And maybe I don’t see the new bands that can be so revolutionary and fresh that the ones from 80ties and 90ties but you know – then this kind of music was sth new, it was rising, but it does not change the fact that we have many great new bands around.

Why did you choose to play metal music? What has made you think: this is what I want to play?

I’ve never thought about it for a second. I started to being interested in music with Queen in 1990 or sth but very close after that came Metallica and it all started for good. And just after being a fan and listening to this kind of music came feeling that I want to create music, write lyrics. And I wanted to play fast and heavy music just beacuse it makes me fuckin happy. It was just sth inside and came naturally. It wasn’t like the decision I’ve made. It was a feeling that I need it and from that time music is a big part of my life on many levels and until it makes me feel good I hope I will be able to do this.

First thing for me is that we are the same as people that listen to our music and come to our shows. I hate to think about it in musician-fan kind of relation. Music is to make us feel good and to make them feel good and if someone enjoys to listen to our music – that’s fuckin awesome. And of course internet is a big thing now in promoting the music, bringing the music to people and being in contact with people. Our Myspace.com/lostbone profile is our main tool to stay in contact with people, and we have more and more friends there. So you know – we are really greatefull to all people that supports us and helps us in many ways from the begining to this day. We play as meny shows as we can and feel good when people wants to talk or have a beer after show with us. You know – as I said – it is all to have fun playing and listening music.

What are you doing to the promotion of the album?

In Poland “Severance” was released on 13th february 2010 by Altart Music and we did the premiere show and then the tour around Poland with Corruption & Carnal in March. From then we’re playing some weekends shows. On 1st June 2010 we had worldwide digital release under Quickstar Productions/Distrophonix so now it is the second round for the album. And of course we’re doing as meny press as we can. I must say that we have suprisingly very positive reviews for the album as well as good response from the listeners. I guess thanks to that we appeared and still appearing in many new magazines & websites ect. We are also considering some options of making the new videoclip and now focusing on internet promotion for the digital release.

Interesting question. Well – there were many great moments like supporting some of my favourite bands and things like that. I don’t have the one show like this. Every time when people in front of the stage are reacting well and having fun is the great moment to be on stage and play. And I hope the best moments still to come!

Would be fuckin great! We’re trying to get some shows outside Poland but for now still was sth wrong. But we are very open for it, and we are looking for agencies and promotors that can help us with this – especially when we have our new album just released worldwide would be great to follow this with some shows. We are working on some shows in Russia and eastern Europe now – we’ll see what happen. Anybody interested please contact us on [email protected]

We thank you! It’s our first interview for italian press so it’s great to talk to you and be on your webzine! I hope you like the album and for any news and also new songs from the album please visit www.myspace.com/lostbone! All the best! cheers from Poland and hope to see you on shows in the future!