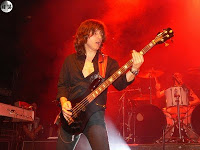 Ciao Gabriele!
Mick Cervino here. Thank you for the interview, I hope you and your readers enjoy it.
Best
Mick
Hi Mick, welcome on Aristocrazia Webzine. May we have a short presentation of your band?
Hello Aristocrazia! I started Violent Storm a few years back, while I still was touring with Yngwie Malmsteen. Initially I envisioned it to be a “band”, with permanent members who recorded and toured as a unit, but I soon realized that, like my previous bosses, (Yngwie Malmsteen and Ritchie Blackmore) I needed to be in total control, especially when it came to my songs. Changes were made as needed and I’m happy to report that the new line up kicks some serious ass! I’ll be releasing their names and bios in the next few days.
I knew the music of Violent Storm with your second album “Storm Warning”, I know you’re working for another release. Can you anticipate us something?
The new release will be a single called “Back Against The Wall”, it is going to be heavy and full of surprises as the song unfolds. It is longer than previous Violent Storm songs, and it will capture the listener’s interest from beginning to end. I can’t wait to have it finished. Just a few more weeks.
You have been the bassist of some historical names of the hard / rock and metal scene like Malmsteen and Ritchie Blackmore,in which way these experiences influenced the compositions with Violent Storm?
Without a doubt there is an influence based on my previous experiences, which goes well beyond Malmsteen and Blackmore. For me, many of the aspects involved with song writing take place at a subconscious level, I just let the mind flow and use the knowledge acquired through the years to guide me through the process. Blackmore has always been a source of inspiration for me, even since I was a kid. During my time playing in his band, I remember him composing or arranging and letting the song itself guide him through. I have adopted a similar approach. For example, If you have a good melody, where does it want to go?…What is the song asking you to do?… Does it call for a more prominent bass line?… (of course!!!).
What is the music Mick Cervino loves?

“Storm Warning” contains songs of the self-titled debut with a greater expressiveness and character. what is the next turn or the direction that will undertake for the new album “Back Against The Wall”?

There won’t necessarily be a change of direction, if anything it will be heavier, grander and louder!

Craig Swyger left the band, who is the new singer?

His name is Brian Dixon. He’s an amazing singer who suits Violent Storm’s style perfectly. We’ll be posting more info about him on www.violentstorm.net in the next few days.


I love several songs from your repertoire: “Deceiver”, “War No More”, “Alimentary Fable” and the cover of Ritchie Blackmore’s Night “Storm”: it’s fucking cool and one of the best i heard. Are you the only composer for music and lyrics?

Thank you for the compliment. Yes, I do all the writing. In “Storm Warning” I used other people’s lyrics in a couple of songs, but I’m likely to continue writing most, if not all of the material myself.

What are the various inspiration for your lyrics?

There is seldom a preconceived topic that I say: “Hmm…I’m going to write about this or that..”. I let the song’s feel and mood dictate what the lyrics are going to be about. There’s not a specific subject in mind at first, but once the song tells me what it wants it to be about then there is no turning back,that is going to be it.

What do you think of the music scene today? What are the limits and strengths of the generations after year 2000?

Unfortunately I can’t listen to too much of today’s stuff. I am all for energy and aggressiveness as long as it is accompanied by quality melodic and harmonic content, which I have a hard time finding these days. Yes, there are a lot of symphonic-metal type bands out there that make an effort, and that’s great, but I get bored easily.

Are there any bands that you appreciate and recommend to listen among the new generation?

Not really, at the risk of missing out on something good, I often make it a point not to listen to too many new bands. It’s one way to maintain my musical sanity and avoid being contaminated.

The bass is a tool carrier that sometimes is just put off by certain types of production, why did you choose it, and what are the emotions involved when you’re playing it?

I chose playing the bass at an early age because I thought if I got really good at it I could some day be hired by Ritchie Blackmore.
The bass is a most underrated instrument, no question about it. I use it to provide a solid rhythmic foundation as well an active harmonic interaction with the other instruments. In a way, it allows me to be in my own little world, while most people are too busy looking at the guitar player or the singer. They don’t know what they are missing!

What has made you think: “This is what I want to play?”

Once I began to get the hand of it and understood the concept of what the function of the bass should be it sort of “clicked”. The powerful low frequencies that held the whole band together gave me a great sense of responsibility and relevance, there was no question in my mind that the bass was going to be my instrument of choice.

Can you tell us the best things that happened you on-stage? Do you ever had a live performance you would like to repeat?

There are always memorable times on stage, especially when you are fortunate enough to be next to legends the way I was. There were performances that had great musical value, others had more of a sentimental one. I suppose the very first concert next to Ritchie Blackmore, in Japan, in front of 5,000 people has to be among the performances I’ll never forget. Performing the first show with Violent Storm was also very special, being able to perform my songs with my own band in front of 3,000 people. I wouldn’t mind repeating any of those performances.

What are you doing for the release and the promotion of the album?

We’ll release a single first, and there will be a surprise cover song. Then the usual reviews, interviews, etc, followed by performances in the USA first and in other places later.

I certainly hope so. We’ll try to make it there later in the year. But the Italian fans have to help us by requesting Violent Storm at their favorite clubs!

Thanks for the time spent with us, the last message for our readers is up to you:

It is my pleasure. I hope to meet you in person in the near future.
Chao Italian Metal fans!. I had the pleasure to perform in Italy several times before, with Blackmore’s Night and Yngwie Malmsteen. I always enjoyed your enthusiasm and positive energy, I hope to see you again touring with Violent Storm very soon. In the meantime please check our websites www.violentstorm.net and www.myspace.com/violentstormband for news on the new release. Grazie a voi e auguri!