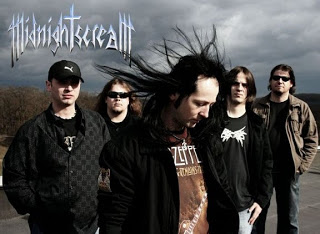 Paul: So just shortly. I can only tell that Midnight Scream is playing melodic straightforward metal with big influence of heavy and thrash metal. All of this is supported by keyboards and melodic mid vocals.

Paul: Indeed, the first impulse of making music was created by far than this band. Certainly the main cause was to make music that we love. Every one of us reacted before in another bands and on this remains early in 2000 arisen project MS. The band was created by former members of bands Dark Mordor and Definition. Gradually, with various personall changes has MS, since 2007, current and stable formation.

I had the pleasure of listening to your latest album “War Never Changes”, I found it very good, modern and attractive, there want to talk?

Paul: Thank you for your appreciation. We were trying to record another valuable product in discography of MS. I think that we managed to move on also compositionaly and with the sound of the record. Althought i need to tell that this is still classical album of MS with all characterics.


What are the songs that you prefer and why?

Paul: It is hard to say for an autor to choose which song I prefer or which not. This task we leave to our listeners so they can choose their favourite songs. But anyway I can mention songs: “Fuga Mortis”, “Unspeakable”, “Voice Of Deception”… Some of them are great on concerts some are good for listening at home. Above mentioned songs are mostly good for concerts, because they are energic and fast.


Who is the writer of the lyrics and who the composer of the music?

Jaro: So mostly I am the writer of the lyrics. But on album shadowplay you can find Pauls text in song “Timerunner”. Also every text by the year 2007 was created by former bands. I think the main composers are Paul, Laco and Reno. But we don´t make some differences beacuse we are trying to work together.


Can you tell us something about the lyrics of your songs?

Jaro: I can tell you that I am mainly influenced by life experiences and philosophy because I am also studying it. Simply I am trying to analyze human moves or my state of minds and all this stuff I put into the text. Texts are usually about life and death, relations, global problems… and so on. On the latest album I polemize about the principle of universe which I think is some kind of eternal war between various aspects of the universe.

What can you tell us about metal in Slovakia? Can you suggest us some bands coming from your country?

Paul: The scene is quite rich, I don´t mean quantity, but style representation. Basically from any metal style are here bands good or less good. The big problem is to muddle through almost for an excellent metal band. We have also a small metal trade, there are is commercial business and huge overpressure of foreign bands. Slovak bands playing their own material are very limited, and they have weak support of fans. However, there are many excellent bands such as: Signum Regis, Castaway, Majster Kat, Depresy, Pyopoesy and many more.

Paul: This type of presentation and comunication i like and I think it´s positive, of course I like old – school printed form of musical magazines and also classic musical mediums such LP and CD. Mp3 format is for me only som kind of information or presentation.

Jaro: I think for fans and for comments we are always ready, usually on our guestbook. Also social networks are big advantage. We acquired many relations from foreign and home bands or fans. We have our weppage, myspace, facebook and many slovak pages. But we still don´t have any managment so sometimes we are under pressure.

Paul: Yes, maybe Paul´s performance on the stage when he was drunk and he could not find switch to his amplifier, or me when I was singing bad lyrics or singing in different places of the song, that was quite confusing for my band  I don´t know if it was a best thing but it was very funny instead. I think the best thing for the band is to see many people standing before them and enjoing your music, singing your lyrics. This was the best think what happend to us,so we would like to repeat this type of performance, I guess.

Paul: I am engaging in metal for a long time, I can say, that I am watching the scene since the halves of 80´s. Beside new bands I likely return to old metal and hardrock classics. And towards to nowadays it is hard to express . Metal bands are more than ever. It is huge quantum that is impossible to watch. Also the style shift it´s big, the mixture of various styles and influences, even kombinations of music, which were before considered as dissociable are now serious genre in some bands and they have many fans, not only metal fans. Surely we must realize that, in some metal genres have their limits demarcated and it´s impossible to move forward or there is no evolution, possibly with musician skill or producers will to create some interesting sound. Simply, some metal genres are depleted. Hardly to inovate. Maybe is all turning like a roulette and one approved style form the past for certain time changes another, which was before on the top. This is also a question of new generation and alternating of generations. I think that metal music is very colorful and huge branch and there will be many of metal supporters. So the metal can live forever.

Paul: Nothing is impossible. Many things depends on conditions of how we will travel and how many concerts we will play. Of course there are many things behind that which must be perfectly arranged and consequently realized.

Paul: Devote your attention to bands you are interested in, appreciate their work with buying their original medium. Thanky you for interview. Greetings from Slovakia to the readers, fans and everybody.