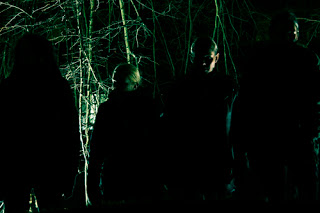 Mother Susurrus are one of those band that may become important in the music scene, we first met these Finnish artists with the reviews of the self-titled EP and of the debut album “Maahaavaa”, now let’s ask them some additional info about them…

Welcome on our website, how is the promotion of your album going? And how are you?

LK: Thanks, we’re good. The album has been met with open minds and the songs still sound about right. We’re quite lazy promotion-wise, so I hope the music speaks for itself.

Naming the band was a surprisingly strenuous task. Those particular words just rang a bell. As far as I feel, the irrefutable depth of a child/mother relationship has something to do with it. The letters are our initials. I guess we aimed for anonymity and a thrilling mystery.

I contacted you when you released your EP and I was surprised by how it was good, Now I contacted you again and I got an album which is partially different from what I was expecting, I felt more maturity in the idea of making something different and improving your sound, what changed during the last three years about the composition? Did your every day listenings change too?

Change is always present, right? Progression and regression – in thoughts, general mood, opinions on a certain form of art and skills of the individual. It’s a cliché, but the change was natural. In short, yes, you can blame the broadening or narrowing of our musical tastes.

Reading your lyrics I often noticed a strong sensation of contrast, a feature that also gets confirmed by the music, but words such as “He’s a number, name, a self-made slave / The promise child, the bitter man” and also “God that builds with care / And learns through FAILURE” bring an important disappointment and a grave vision of religions and anything around them, am I right? Do you think that religions have been and still are a cancer for society?

Yes, there’s an element of disappointment but it’s also about self-observance. In the end, I’m no better than a priest or an imam. Also, I’m not very keen on pre-chewing that gum for you. Whatever takes away one’s happiness or spoils the environment is usually bad.

Is there a concept in the album, or maybe it is a link between the tracks that still doesn’t form a central idea?

The songs have lived their own lives for a rather long time. Lyrically, if there’s a certain theme to be found, it’s the man.

Like I’ve already said, the emotional contrast is one of the features that gave life to the atmospheres in “Maahaavaa”, how did you find the perfect combination among vocals, notes and bakground of a track? Listening again to the album, are you satisfied of all its different sides?

Mostly it’s kind of forced, yet intuitive musical bonding between five very different people. It’s exciting to witness how such a chaotic setting can be used to create something strangely ordered. I think we’re all proud of the album as a whole.

What is the meaning of the pics of the booklet? And what about the symbol dividing your name?

The meaning is to inspire a feeling. The symbol resembles something, doesn’t it?

We’re a gregarious species and I think we can’t help it. Things happen in cycles. I hope it’s not too big of a strife for people to sound like themselves.

Which are the artists of your nation that you like and that you feel artistically near?

If you could organize a gig in which you could make five bands play together with Mother Susurrus (of course as headliner), which bands would you choose and why?

See above. I’m fond of variety. Definitely wouldn’t place us as the headliner though.

Talking about live shows, how is the situation there? Do you play often? have you had the chance of playing the new album on stage?

We’re not very active arranging shows, so usually it has happened because someone asked us to play. The live setting is whole another world for us. I guess we’ve played all the album songs in one form or another.

Which are the five albums that made you what you are now? Can you link each one of them to one of your memories?

Which albums and movies did you bought/see recently?

Some I’ve been listening to with regularity:
The Men – “New Moon”: they’re getting softer but by no means worse;
Voivod – “Target Earth”: easily one of the best metal releases of the past few years;
Pharaoh Sanders – “Love Will Find A Way”: funkier, more straight-forward “Love Boat in Space” stuff from a freejazz guru;
Arpanet – “Wireless Internet”: menacing, kind of retro-futuristic Detroit electro;
Primer – “Grade A+ Science Fiction”: can’t wait to see Upstream Color.

Since the passionates like vynils, will you release you album in this format?

Yes. It’s coming later this year, hopefully during the summer or early fall.

What can we expect from the future? Are you already working on something?

Yes, we’re rehearsing new songs and probably releasing something shorter before another full-length.

The interview ends here, thanks for your kindness. You can leave one last message for our readers.

Thanks a lot, this was our first interview ever. Good spirits to you!