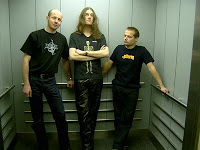 Hi Gabriele, Pylon was founded in 2002 by me (Matt, vocals and guitars) and ex-drummer Tinu. The band is from Baden, this is near Zürich. Actually I wanted first to make more into grunge/stoner. But deep inside I am a “doomer” so we went back to this kind of metal/rock. There where many musicians coming and going into the band. The only remaining members are me and Jan (bass).
We are actually right now more a studio than a live band. We focus more on recording albums than to play gigs. so we did only, i think, 6 live gigs in the past 8 years :-/

You are a classic example of doom, your style reminds me a lot of famous names to the likes of Black Sabbath, Count Raven and Saint Vitus with an almost folk touch. When did you decide to create the band and why?

As mentioned above, the band wasn’t first meant to be a doom band, but I had already played years before (1996-1998) in a doom band, so suddenly I played this stuff again and so we decided to go more on that way. It wasn’t the meaning that I should be the singer. But we couldn’t find a right vocalist for our music; so that why I went to start singing lessons and became the band’s new vocalist. And of course I’m a great fan of the mentioned bands above!

I came in contact with your music with the previous “Th ‘Eternal Wedding Band” (“Falling Into The Sun” is gorgeous Hit “) and I had the pleasure to review the last” Doom. “Which are the differences between the two works?

TEWB is more a “spontaneous” album, most of the songs were created by jamming together and only two where written by me “alone at home”. So the spirit of that album is different. Actually I wrote more songs for that album that should have been on it, but the drummer didn’t like my voice, neither the songs, so that’s why it came to a split and he left the band. We put those songs on “Doom”.
these are: in the shade, doomstone, psych icon and beneath, beyond.
That’s why tinu is playing the drums on “in the shade” it was the last song we recorded with him before he leaves.
Most of the songs on “doom” are very old, I wanted to do them without any critics on it from other musicians, so that’s why we are only two “real” members on that album, and all others are session musicians. This was an amazing experience to have that much good people working with us that way! The album came exactly the way I wanted it to be! (Sound, cover, production…) TEWB did not exactly came out the way I wanted it to be, so I am very proud of “Doom”…

The tracks are often long and varied, which are the rules you follow to create them?

I wrote most of the songs and riffs. Most of the songs first exist in my mind, then I make a demo that I play to the others, and then we arrange it together. We don’t try to make “long” or “short” songs, we just do it. I think it doesn’t matter how long a song is, he has just to be good!
The songs on the new album are also very long (between 6 and 9 Mn), but I don’t think they are boring… well I hope so!!
What also makes them longer are the guitar, flute and drum solos, we love it to have this parts in it. It makes it less boring… I think haha

Do you have established roles in compositing music and writing texts?

Yes, actually, as said before I wrote the songs, and jan the lyrics. Jan doesn’t write really cool songs… hem… so that’s why I prefer to do it myself. But if someone other has a good idea, we use it. So “Deadlove” who is from Jan.
We are working on 2 ways: I write the song and sing some bullshit on it (some time also a little bit good stuff that is used by Jan), and Jan is picking up the intonation and lengths of the phrases and then he writes a text for it.
The other way is I pick the already written lyrics by Jan (we have dozen of them) and do a song that way. Those songs are most of the time finished when I show them to the other members.

Your album is full of guests, is it a choice for having the cooperation of friends and musicians that you respect?
for you this aspect and in which way do you transmit this in the lyrics?

On one side it is as mentioned above. On the other side I like it to have many different people working on an album; it makes it more interesting because everybody is giving his own touch to a song. I think it is that who makes “Doom” so special, so “organic“ and maybe psychedelic?

How do you live the crisis of the Church linked to several scandals brought to light several times and unfortunately all too often covered up by those who should represent it?

I don’t think it is that bad or negative… the most negative people in this world aren’t working for any church… this is only in the news paper right now because they weren’t any others bad things or sensations in the world who makes newsmagazines sells…
I won’t pretend that this isn’t bad, of course!! But do you know how many girls and women will be raped in the next month in south Africa when the FIFA world cup is?? Nobody takes care of this, because it brings a lot of money and everybody just wants to see a beautiful World cup and see his nation win…! so those times will pass, and when the USA doesn’t make a new petroleum catastrophe in their seas it will be another think coming and everybody has forgotten about the fate of those “raped” children by some priests… bad world…
But I must admit that they are lots of good people working in the churches (no matter witch church) and nobody is talking about those good works… why??

What is metal for you? How do you live and how do you see the scene today from both musical and social the perspective?

Metal means a lot actually to me, I’m listening to it since 30 years now!
Musically I don’t think that any band or sound will be coming that we haven’t ever heard! All has already been tried and played. So I like to listen to old school metal from the70 and 80’s. I think it’s the best sound that was and will ever be!!
What belongs to the social or intellectual side of the lyrics and concepts, more and more bands are going to be negative and just want to destroy everything including themselves! The nazi stuff is going to be more popular in metal, also others bad ideologies… I think this is bad for metal and in a certain way it isn’t metal at all!! Metal is not a right focused music, but more left (from the political side)
So we will see where this will end…

How have you supported the album release, did you have a chance to perform live?

No! We didn’t support the album live in no way. We wanted to focus all the time on the new album: “Armoury Of God” who is soon finished!
We had lots of opportunity to play live but we refused it… a matter of time, I have children and a job, so the little time I have for music I want to use it to record new albums.

Hm… no, to be honest most of the guys who calls themselves “mixers” doesn’t really know how to create a good live sound… so that’s why I’m most of the time angry/deceived about how a live gig turned out… but maybe one day…

I don’t give a lot of those “social networks” called facebook and so on, I prefer real friends in a real life! We have only a myspace account because there you can put lots of infos and also songs for free and it’s simple to handle (well, most of the time…)
So fans are writing there and it’s (for my way) the only thing I do with fans… not a lot, I admit, but also here: a matter of time!

What are the future plans of Pylon? Have You already new material ready?

The future plans are “Armoury Of God” our new CD, Who is soon finished! We have already recorded seven from nine songs. And it sounds very good! We also have two new members, Andrea Tinner on drums and Vale Baumgartner on guitars. They are very good musicians, so it’s a pleasure to work with them!

Hm… I think on day, yes! But not before 3 or 4 years! From that point now, we want to release 3 more albums. Then I think we will make a little tour across Europe (Italy, France, Greece) but time will tell.

We sing about live and death, everybody has to die one day, no matter who he is. Think about your fate… is there life after death? If it is, have you chosen the side you want to be? The paths you want to follow? The answers are here, but we have to seek them…
Cheers matt / Pylon