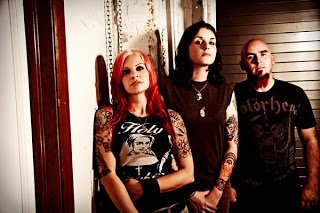 Let’s start speaking about how the band started and why did you choose to play this genre?

Janette and myself have been playing together in various bands for the better part of nine years. When our last band started to dissolve, we already had some songs and ideas for this style of heavier rock. We found Felipe through a musician’s classified ad, and started to jam and work on the songs from there and really hone in and develop our take on the sludge/stoner/doom metal genre.

2/3 of the trio are girls. We have more girls in metal over and over: Alia O’Brien’s (Blood Ceremony), Liz Buckingham (Electric Wizard), Michelle Nocon (Serpentcult). It seems girls to be more dedicated to music than boys. How did you get in contact with the music world?

Women have always had a place in rock n’ roll, and more and more are becoming more involved in the metal genre. For Janette, music was readily available through her older cousins who were into metal. For me, I grew up in the infamous Tipper Gore war on rock and music with “explicit” lyrics and all that. My parents were really strict about the music I was able to listen to, so I wasn’t introduced to metal until later in my teens.

Shroud Eater are not only a stoner/doom band. I have found some punk and grunge elements (Melvins?) and some progressive and psych parts, do you agree?

Yes definitely. A lot of people call us sludge or doom or “stoner metal” but I don’t think those terms accurately describe us. We certainly have elements of all those genres, but ultimately the music I listen to and love the most is the grungey, heavy rock of the 90’s, Felipe is more of a metal drummer, except he adds all these “Latin” flavors to his drumming that are way different than the stripped down, ultra simple drumming of the sludge and doom genres. It’s like the guitars and bass are doing some sludgy, alternative heavy rock stuff and our drummer is picking up stuff from like Sepultura. It’s an interesting mix, some people dig it, and some people just wanna hear that same “expected” style of music that these particular genres offer.

The album has two faces, the experimental one (“Shark Valley” e “Oubliette”) and the violent one (“Silent Hunt”, “Descent From The Summit”, “Baying Of Jackals”, “We Are The Beasts”), how do you start preparing a track and how do you write the lyrics?

The lyrics come from a lot of scraps of paper and random thoughts I have that I write down over a period of time. Some songs have a theme or feeling musically that I work towards elaborating with lyrics, other songs the lyrics are already there and it’s just a manner of putting music to it. It really depends on how the creative muse strikes, I like trying and doing different approaches to songwriting to keep it interesting and fun.

Jeannie, I really like your way of singing, with an acid and aggressive twist. I tought to Otep Shamaya (Otep) and Karin Crisis listening to your voice. Do you have a special technique or do you use your instinct?

It is really instinctual. I have never been comfortable singing, or being the “front person” of the band, but out of necessity I did what I needed to do. When I first started singing, I looked up a lot of videos on youtube to make sure I wasn’t hurting my throat in the process. Eventually I fell upon the right tone and pitch and over the past couple of years I’ve learned to use my voice a lot better, and hopefully I can learn some new techniques to switch things up.

Who did the artwork? I like it a lot, and reminds me some covers from Razorback Records. How thought about that cover?

I’ve done all the artwork myself for our releases. I never realized it until recently, but I guess I have control issues, because I’ll see something and think “wow that’s cool” – and then I’m like “I can do that!” And it just seems easier for me to do these things rather than have someone else do it, because I really hate depending on people to do anything for me. I’m very independently minded and that goes through from our music, the artwork, or the way the band is handled for a managerial standpoint.

Could you tell us something about the recording process? Are you happy of the final result?

We’re pretty happy with the result. There are things we wish we could’ve changed now, but that is a learning process, and the mistakes we made on our first record we won’t make again. A lot of people that have reviewed our record get stuck on the “production”, the sound of this could’ve been better, or the way the drums were recorded could’ve been better. Whichever the case, if people can only listen to our record to hear the mistakes and not the songs, then that’s their problem. For all the negative “production” issues some people claim, other people really love the album. Ultimately, you can never please everyone, so as long as you you are happy, then that’s what counts.

You self-produce your music. Do you think you’ll search for someone to produce you or are you happy of the way you are working and want to follow this trail?

We are always open to new things. Really the issue with someone “producing” us is that it costs money, which we just don’t have. For right now, we try to be critical and “self-produce” and “self-edit” to the best we can so that we can have more time and money for recording, mixing and mastering.

I reviewed Hollow Leg, I think you know them. Are you in a good mood with other bands? Is there some kind of “scene” supporting similar band or not?

Hollow Leg are friends of ours, even though they are from Jacksonville, Florida and we are from Miami (at least 6 hours in between the two cities). The more we have played out through Florida we have seen and heard of many new bands that are starting. For the most part some bands are very supportive of each other and are active in creating a scene for this type of music. In Miami, we have started to organize live shows of this type of music in our warehouse where Felipe lives and we practice. Having a “DIY” space like this is perfect for a scene that is starting out, and in that way we have been very active and have been lucky that the bands we have played with have been supportive.

Florida and metal: the perfect marriage. I think to Slayer, Exodus, Morbid Angel, Obituary etc., do you think that all this great band in some way may influence you in starting to play your music?

Those bands have influenced some of us, for sure. I would say mostly Felipe. For me, when I think of Florida bands that are inspiring, I think more along the lines of Cavity, Floor and Torche, who paved the way for the sludge metal that we play today.

What does the critic say about “ThunderNoise” and what do your fans think about your debut?

Critics have been overall positive on the album, although many have gotten caught up in the album’s production. It is a shame when people can’t hear the songs themselves because they are so caught up in not liking the way the drums were recorded or whatever. It’s OK though. We are a young band and this is our first album. If other people like to get caught up in our lack of experience then that’s their problem. For every critic with a harsh ear, we have other people that really love the album and songs in general. Ultimately, the best way to set yourself up for failure is to try to please everyone. That’s why if we, the band, are happy with our product, that is what matters.

Do you have some live show settled? Have you any plan to come in Europe for shows? I really would like to see you live, I think Felipe would be a great live drummer… devasting like an ironsmith!

We spent the spring touring and doing a lot of local shows but now during the summer we are taking a break to write new material. We would love to go to europe one day, hopefully one day soon. We will let you know if we make it overseas!

Five words to show who Shroud Eater are and five reasons why it’s good to listen to “ThunderNoise”.

Do you have a dream you would like to realize as a band?

The dream of a common goal is definitely shared between the three of us, and that is to be able to play our music, record albums and tour as long as we can do it, and as long as people like it.

The interview is at the end: the last words are up to you. Thanks for being here with us!