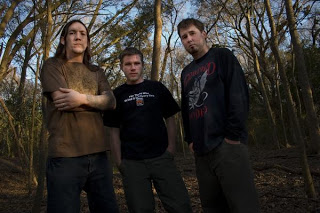 Jason: I’m great. thanks for asking.

Let’s start introducing your band to our readers, who are Suture, how were they born and what did they do up to now?

Suture was formed in 1998 by five guys who had a love and passion for death metal. Our line up was me (Jason McIntyre, guitar), Bruno Muenzler (bass), Lance Strickland (guitar), Brent Smith (drums) and Jayson Ramsay (vocals). We played every where we could, house parties, local club shows, out of state shows and festivals all over. We never turned down a gig back then. We would all load up in a van, hit the road and have an awesome time playing in different places and meeting all kinds of different people. We recorded our first demo with Chad Kelly of Underworld Records, which is pretty ironic since he helped in the re-recording our last album. It consisted of what we thought were our two best songs, “Blood Soaked” and “Still Inside”. That demo was sent out all over the place and it really helped get our name out. The demo also opened up a lot of doors for us with festival organizers and clubs outta town. We got to play some really cool events like Gathering Of The Sick Fest in New Mexico, The ’99 Ohio Death Fest and Texas November To Dismember Fest which had headliners like Danzig and Morbid Angel, it was a blast. Not long after that we recorded our first full length “Carnivorous Urge To Kill” (which we are in the process, with the help of Chad, re-recording it for release later this year), things started to pick up for us after the release, we released a demo compilation cd through Amputated Vein and a split cd with Leukorrhea and Lehavoth on The Spew records. Then in 2006 after several member changes, leaving us as a three piece, we released the original “Skeletal Vortex” cd through Unmatched Brutality Records. Not long after that we split, which brings us to now. With our re-release of “Skeletal Vortex” through SFC Records.

If I’m right, now you have Lance Strickland at the guitar and Brent Smith at the drums, how did you choose them? Did you already know them or maybe you played together?

Lance and Brent are the original guitar player and drummer for Suture and were on the original release of “Carnivorous Urge To Kill”. It only made sense to have them back.

I had the pleasure of listening to both your works, the last “Skeletal Vortex” thanks to S.F.C. Records which re-mixed and re-released it, will you make the same with “Carnivorous Urge To Kill”?

Yes, we are in the process of finishing it up as we speak. I already have a label in mind to release it, but I will keep that quite as of now. Totally re-recorded with a few surprises extra tracks and a new cover art. We are excited. “Carnivorous Urge To Kill”, will finally have the production it deserved from the beginning.

How did you get in contact with SFC? Will they be the ones who will release a possible third album?

SFC contacted us originally about re-releasing the cd since no one could get a hold of Unmatched Brutality Records to get copies for their distro’s. The production of the original release was good but sounded thin. I told SFC if they wanted to release “Skeletal Vortex” then I wanted to remix the cd, thicken it up a bit. Once Chad and I started remixing and getting into the tracks we ran into some problems with the guitars, we couldn’t get them the way I wanted them. I wanted a more heavier, beefier tone. More like the guitar sound I write with and play live with. The only solution was to re-record the guitars. So we started the guitars from scratch. The whole re-tooling of the cd track by track, instrument by instrument, was a lengthy process, took about six months on and off. If you compare the two side by side you would definitely hear the difference and agree that re-recording it was well worth the time and effort. As I stated above I have a label in mind to release the “Carnivorous Urge To Kill” cd which we will announce soon.

Four years of break, were you on hold? What stopped you until now?

Everyone kinda went their own way, so it didn’t make sense to keep the band going. We are only together right now for the recording of the “Carnivorous Urge To Kill” re-release. We all felt like that original recording was god awful to say the least. But that’s what happens when you have no recording budget. Now we get a chance at redemption.

You have been into the death/extreme for a long time, last year I had the pleasure of reviewing Excommunicated’ concept album “Skeleton Key”, which are the reasons that keep your passion for this world alive?

I have been listening to extreme music/death metal since I was about fifteen, now Im thirty-seven. So its been quit a long time. It is hard to describe where my passion for this style of music comes from, its just in my blood, I love creating songs and recording. It is an awesome feeling to sit back and listen to songs you’ve written.

You have been signed by many brutal sounds based labels: Unmatched Brutality Records, Deepsend Records, Amputated Vein and the Italian The Spew of Clod “The Ripper” DeRosa. How much is it important to find someone who believes in your projects? I ask this because today I listen to many self-produced works which are really good but still are ignored by the labels and I ask myself why.

Well, I do not feel like its completely necessary to have a label these days, especially with the internet, I mean now you can get your music all over the world by just posting mp3s on the net. You have a web site that you manage and can sell your own cd’s through it, were you get 100% of the profits. You can have contact with other bands and promoters to help set up shows and tours.

Suture made their first steps in late Nineties, which are the main differences between those times and the modern Death Metal scene?

Death metal bands these days sound to mechanical if you ask me, to precise to over produced, plus everyone sounds the same these days. But Im sure people would same the same thing about bands from back then as well. That’s just my opinion.

What do you miss about the past decades? Does Metal still need to learn from the past or does it need to look forward and find new ways? There is always a debate between the old school fans and the ones who try to “mix” more genres (often no really in a good way) to make something new, what do you think about this?

I’m old school through and through, I do not hear any bands these days putting out any thing better than the first two waves of death metal bands I grew up with. I mean can you honestly show me an album these days better than “Human” by Death, or “Blessed Are The Sick” by Morbid Angel or “Consuming Impulse” by Pestilence? I would say no.

Which are your musical cornerstones? Are there any bands which you consider fundamental? I mean, the ones that in your opinion will never make a bad album.

Like I stated earlier the early 90’s death metal bands specifically their first few releases were a huge influence on me. Death, Morbid Angel, Cannibal Corpse, Pestilence, Napalm Death, Suffocation and Deicide just to name a few. They were the first, they set the standard. As far as bands that I feel could never make a bad record, I’d have to say Napalm Death and Cannibal Corpse, they have consistently put out great records, no compromise, still as brutal and aggressive as they have ever been.

No live shows for Suture. We are strictly working on the re-release of “Carnivorous Urge To Kill” and that is it. No plans for any shows or anything new material.

Is there a live show of yours (festival or a date in which you were headliner) which you’d like to talk about, maybe with some anecdote which you want to share with us?

The most memorable show was the Texas metal fest November to Dismember, we got to share the bill with so many awesome bands, Morbid Angel, S.O.D., Danzig, to name a few. Specifically I remember eating up stairs in the band catering area sitting right across the room from Trey from Morbid Angel and thinking, how fucking cool is this! And if that wasn’t awesome enough, when I was done eating and walking down stairs, Glenn Danzig walked right passed me going up to eat. Mind blowing.

Which are your plans for the future of Suture? What can we expect in the next future?

Besides the re-release of “Carnivorous Urge To Kill”, which we hope will be out early next year, we are working with Underworld Records (Excommunicated, Killgasm), to release an ep called “Prolific Inhuman Deformity”, which consists of four songs we recorded in 2002 with Eric Park, who is now playing drums with Devourment. That should be out before the end of this year. After that we have no plans.

We are at the end of the interview, you can leave a last message for our readers.

Thank you for the interview and for everyone out there that has not picked up a copy of “Skeletal Vortex” go get it! If you love heavy old school death metal you will not be disappointed!