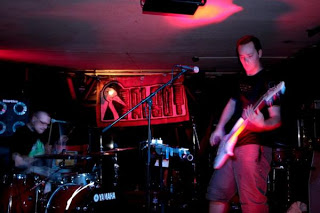 Talbot are a very interesting band from Estonia, we wrote about their music reviewing their albums, “Eos”  and “Scaled”, and now it’s time to know them better.

Welcome on Aristocrazia Webzine, how are you guys?

As usual, the first step is to introduce the band to our reader: who are Talbot, when it was born the desire to set up this project and what were the most important steps you have accomplished so far?

Magnus: Talbot is a two-piece band making heavy music. We’ve been doing it about five years for now and since then we have visited many countries in our touring, like Australia, Japan, Russia, not to mention most of European countries.

In the three years between the release of “Eos” and “Scaled” how Talbot are changed? I noticed some more mystical and introspective vibes creeping within the tracks of “Scaled”.

Magnus: Yes, I think it’s true. We’ve become more complex and musically fit than ever. Three years is a long time and new album has taken our music to a next level, for sure.

Jarmo: It reflects the moment where we are right now.

It isn’t a simple process to create hallucinogen songs, so what is the method in your songwriting? Do you have some precise dynamics to follow or do you prefer a totally free approach?

Magnus: Actually, it was no easy thing to do. Like usually, we had our ideas, bits and pieces and some short music clips and riffs, but it was a hard time to bring this all together. The album was born after intense rehearsing and practicing, so we were quite busy that moment of time.

Jarmo: Usually it takes a long time before all the pieces start to fall together. Sometimes so long that you even start to think that maybe it won’t get together at all. And then suddenly, bang, it all just makes sense. It’s been like this with all of our releases, at one moment everything just start to happen very fast, but it takes time and a lot of sweating to get there.

What was the main reason that led you to play this kind of music? How did you fell in love with this music and what are the albums and the artists that you feel like the essential ones to know it?

Magnus: At the time we started a band, I was hooked by desert rock bands (Kyuss, Yawning Man, etc.), that lead me to heavier stuff (like Sleep, Ufomammut) so it was a logical step to play such kind of music.

Jarmo: It just feels right to do this. Felt right back then and feels even more right at this very moment.

Magnus, you are the writers of the lyrics, but they were not included in the booklets. Could you tell me where you get your inspiration to write them and what are the issues that you face?

Magnus: The lyrics I write are strongly connected to the theme and the atmosphere of current sound. There’s not much storytelling but giving out an idea of an overall feeling and emotion.

The graphic side is depeloved by Jarmo, right? Can you explain the meanings behind your artworks?

Jarmo: Yep, I’ve done all the artworks and webs so far. It’s the same for me as it is with Magnus and the lyric, I try to draw the artwork, that reflects the music. The music is giving me the idea or direction. It can also take a long time before I just suddenly get the idea out of nowhere. I think this process is like this with a lot, if not even with the most of the artists.

Jarmo, if I’m not mistaken, I read that you are a tattoo artist and you have a shop. The style you use to create the Talbot’s artwork is similar to the way you create the tattoos?

Jarmo: Yes, I think the tattooing adds some ideas to my works with Talbot indeed and vice versa.

What can you tell about the metal scene in Estonia? Honestly, I don’t know your country, so can you suggest us some other bands coming from Estonia?

Magnus: It’s a small country but quite many good stuff worth checking out: Nevesis, Tolmunud Mesipuu, Pedigree, Shelton San, Estoner.

And what do you think about the increasingly expanding stoner/doom/sludge scene in recent years?

Magnus: It’s great. But it’s also harder to sort out interesting and good bands, because there’s so many new stuff coming up. At least for me it’s hard to search for new stuff. Need to take a days off for that.

“Eos” was released initially as selfproduction and was later supported by Slow Burn, a sub-label of Solitude Productions, and now “Scaled” is released again as selfproduced. Did you had not received any interesting collaboration proposal? Nobody noticed this great album?

Magnus: For us it’s easier just to release it by ourselves. We’ll see what future brings.

Jarmo: Yep, no hurry, everything will happen in it’s own time. We have decided that there is absolutely no point of wasting our energy on to waiting and hoping that someone would release the album. So instead of sitting we just release it on our own at first and it will live it’s own life from there on.

What can you tell about your live situation? There is some experiences that had particularly marked you on this side?

There is some night or festival you remember with enthusiasm, both as musicians and beholders?

Magnus: Yeah, first comes to mind a small russian gig, where a venue was so crowded that people were struggling to see inside the window and some dudes were hanging under the ceiling to see the show.

Jarmo: Yeah, that was awesome. Also, there was no real stage, so all the equipment was on the concrete floor. And because of that the drums moved around every time you hit them. So two people we’re holding the drumset while the entire show. It was really crazy event there, cool.

If you can plan a worldwide tour, with which bands would you like to share this experience?

Magnus: Really hard to say, should be a good band with great personalities. They should be cool guys to tour with.

Jarmo: Humor has to be right.

Five albums that have marked five important moments of your life?

Magnus: Metallica – “Master Of Puppets”, Nirvana – “In Utero”, Earth – “The Bees Made Honey In A Lion’s Skull”, Captain Beyond – “Captain Beyond”, Frank Zappa – “Live In New York”.

There is a song that you never stopped to listen, and that is your first choice if you are in the mood to create a compilation? And which could be your perfect playlist? Some sort of ideal top ten?

Magnus: If i check my music player, I can bring out following names. These are tracks that I often listen, when sitting in a tourbus: Soundgarden – “Hands All Over”, Yawning Man – “Sonny Bono Memorial Highway”, Celtic Frost – “Progeny”, Acid Bath – “Graveflower”, QOTSA – “Avon”, Sleep – “Dopesmoker”, Type 0 Negative – “Be My Druidess”, Tool – “H.”, 16 Horsepower – “Low Estate”, Butthole Surfers – “The Lord Is A Monkey”.

What we wiil see in the Talbot’s future?

Magnus: Gonna play a few festivals in this summer and there’s gonna be a lot of touring in autumn.

Jarmo: As Magnus said, festivals (including Roskilde Festival) and a lot more touring in Russia, Europe, Scandinavia and Balkan countries in 2013. Plus more tours in 2014.

Recommending to our readers listening to your amazing albums, I invite you to close our conversation, the last word is up to you.

Jarmo: Yep, see you on the road!