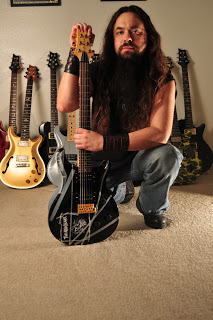 Today Aristocrazia is in company with the mastermind of The Alien Blakk, the artist (and i can’t define him better) is Joshua Craig.
Hi Joshua, welcome on our webzine. How are you?

I am doing great, thank you for having me.

The first step is giving some infos on your band to the ones who don’t know it, so can you explain us its history?

The Alien Blakk began as an idea in 2005. I had some songs I was intending on using with Ray Herrera (Fear Factory) when we were starting a band and ended up not using them. We started a more Rock N Roll type of band and then the heavy tunes that I was writing outside of our practices evolved from there. That began th bed of work for a few Alien tunes.

I know that you are a fan of Star Wars, so is there a relation between this fact and the name The Alien Blakk?

No, but thats a great question! I was actually going to change my name to Alien Blakk before I moved to California to fit into that odd culture but that never happened. Alien as a forst name and Blak as a last, I think it would have been too weird. So, I kept it as a band name.

Four years have passed from the release of Modes Of Alienation, did something change since then I listened the new Bekoming and I think it is darker, inkling of a past uneasiness or of a society which lives in a not so good era?

A lot has happened since then! Bekoming is that cathartic process of me dealing with the grief over the passing of my father. Bekoming is my new awakening to another form of myself. A new discovery of who I am now at this point in my life and to me, my life itself. The past uneasiness is very on point, yes. I was unable to cope with situations I was in in a healthy manner and have since worked thru these issues. Most of my work happened once this album was done. I sat down and looked at what I was writing. I realized I had written a concept record without even knowing it.

The album is rich of nice compositions and famous guests, from Mark Hamill (yes, Luke Skywalker, the ones who don’t know Star Wars saga should watch it) to Eric A.K. and Craig Nielsen (Flotsam and Jetsam), Kevin Talley, drummer of so many bands and David Ellefson from Megadeth which is your friend since you were young, I think. How were these collaborations born and how do you decide who will work on a certain track?

Theres also Deron Miller from CKY and Donnie Hamby from Double Drive as well! Awesome artists! Dave I met at a NAMM Music Conferance in California and we hit it off immediately. In short, Kevin I met thru my lawyer, Donnie I met thru Ellefson, Craig I met when he called me to play on a Megadeth tribute record but we met at a Flotsam show, A K I met because I had briefly jammed with Flotsam back in 1996 and Deron I met thru James Murphy (Death, Testament) at a dinner. Mar Hamill I met at a bar b q at his house and we hit it off and became buddies immediately. I had all these people who were down to be involved and it just happened that I threw out a couple tracks and they chose whick one they were interested to be part of, or I just said, hey,…you do this one!.

Your style is varied, you put many influences in your tracks, but what does Joshua Craig listen to? Are there artists that you thinkn are fundamental and that created the base of your music?

James Hetfield is all I know, really. I learned how to play guitar and sing from learning his stuff. I continue nowadays to learn Metallica by teaching my students how to play the newer Metallica stuff. The music he creates is deep and meaningful, so I go from there. I told him this and he mentioned he was ready to pass the gauntlet to anyone who was worthy of proving themselves, so I will continue to push myself to the point of hopefully working on something with him some day. If not, he inspired me enough to spark a love for music, so either way, I am grateful!

The album can be appreciated from who searches for heavy music (The Path), who wants the easy listening (Hate Me) and who likes heavy metal will be satisfied by Runnin’Down A Dream; also, it doesn’t have up and downs, how was it received from the critics And from the fans of the band?

Thank you, I truly appreciate that. All the reviews have been very epic and positive. I have quite a few posted on the -contact- page on www.thealienblakk.com for others to view. I am grateful people are finding usefulness in the music and the process I took to create it. That is a reward in itself. The fans have been great, we did a short 4 week tour to preview the newer stuff live and everyone went nuts!

You are a mastermind, you write, compose, produce, you also are a fan of cinema; will we see you working for a soundtrack one day? Or maybe would you like to become a director, like Rob Zombie did?

I actually do a lot of video game music. Its close to sound track work I suppose, so I would have no problem doing sound tracks and going into a direction like that. I will always do The Alien Blak though, even if it takes a minute or two to get one out! I would not mind directing, I sure have no problem telling it like it is or how I would like to approach a certain situation, so yes, I am sure I will venture toward that direction when the timeing presents itself.

Is being without a label good when you release a so personal album. Do you think that label could limit your work?

I had three diffrent labels, all of whom were wanting product and didn’t care much about the content as long as I delivered a Master. I refused to let the labels I was working with limit my scope. I made the album I wanted to make and honestly, if only I heard the music, I was content with that. Its a struggle to deal with certain people, but most of these people saw I was simply not going to deliver a Master because I refused, so they had to give in and give me my rights back.

So haven’t you been contacted by any serious label interested in you project (if it is true, it’s very very sad)?

I haven’t looked. I figured I own the Masters to two separate recordings, so if I was to be signed, I would be able to deliver 3 Masters immediately. I am open to any interested parties!

Passion made you give online guitar lessons on your band’s website, how did you have the idea and how is it going?

I was originally contacted by Mel Bay (book Publisher) to do on-line lessons. One a month for 6 moths until my book was out to introduce me to their on-line community. I have the links to those lessons posted on www.thealienblakk.com under the lessons page. My book just came out. Its a 142 page book and it comes with a 13 lesson DVD as well as an 87 track CD. The lessons are going great and if anyone would lie lessons, they are available on a customizeable way on the -buy- page on www.thealienblakk.com

How much is important for an artist to be able to work with the modern medias?

I thin you have to do it. Everything is changing and you need to keep up in order to be relevant and understand what people are talking about.

Is there something that you miss from the past decades about the music world, like searching for an album in the shops (every day emptier than the day before) or just the purchase of an album after the advice from a friend?

I miss all of those things. Unfortunately the technology of today will never allow the past to continue in that respect. There are a few record shops that are selling DVDs and video games to be relevant but it is what it is. Advive from a friend was always great, now they simply e mail links!

Will The Alien Blakk make some gigs and how will be the line up Maybe David (bass) and Chris Kontos (drums)?

The Alien Blak will do gigs, yes. Chris Kontos was let go due to him not being able to commit to touring. David is busy with Megadeth right now, but who knows about the future. I will have a new line-up of use people who have been on the records, only timeing will tell what presents itself. I am taling with a couple great musicians right now, so it will be strong and established players, not to worry!

I truly apprecite the opportunity to talk with you and your readers and hope everyone can stop by www.thealienblakk.com and hear some of the new music and see what happening next! Or go to I-Tunes and check out a song or two, thank you.