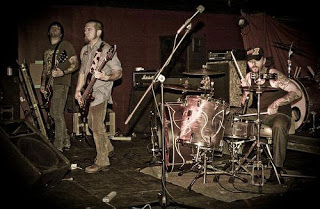 Venomous Maximus have been a nice discover of early 2012 with “MMIX MMXI” and they confirmed their quality with the debut album “Beg Upon The Light”, where are they from? Who are they? Which are their goals? Let’s find out.

Hi guys, how are you doing?

What makes you so venomous? Is there a reason for your monicker?

Never forgetting we are always in the presence of evil. It never sleeps.

How was you interest in occult rock and proto-doom born? Your sound, even if keeping “modern” characteristics, is linked to the Seventies and early Eighties.

Around the turn of century I got burnt out on a lot of heavy music. The only only modern bands I listened to all reminded me of the classic rock I grew up on. So I made a decision to listen to Eighties new wave, delta blues and obscure Seventies rock (’71 – ’75). I wanted to rewire my ears. I never imagined when I was a kid that I would ever be playing the kind of music I grew up listening to. So I got fed up and made it happen.

The growth that led you to “Beg Upon The Light” has been fast: since the release of the first ep “Give Up The Witch” to now, which are the steps that you consider fundamental for what Venomous Maximus are today?

Not worrying about being heavy or paying attention to what everyone else is doing. We take about two months to write a song from start to finished, playing it over and over till we find the sweet spot.

May we define “Give Up The Witch” as your “hit”? It’s the only “old” track in the album, why did you record it again? Weren’t you satisfied of the first version, or did you want only to make it a bit different?

Yes, you could call it our hit. When we wrote that song it was a turning point that we could actually write a pop song. We knew we had to have one old song on the record. Its an AC/DC thing.

I really appreciated the acoustic tracks “Father Time” and “Mother’s Milk”, I tried to read the lyrics but I have to tell you that my eyes died trying to follow them; may I ask you which is the role of the parent figures in an album that it’s almost a tale?

“Mother’s Milk” is the Earth, “Father Time” is space. These are the two arenas our lives take place in.

Is it right to say that in “Battle For The Cross”, more than in other songs, there is a heavy/epic attitude? Do you like that style and do you like bands such as Manilla Road, early Manowar and Omen?

I love all three of those! I consider “BFTC” is our heaven and hell. Everybody needs a galloping war cry.

Is it right to “fight for the cross”? Thinking of the Inquisition era, of Salem and the witch-hunt, and of the high number of “heretic” people for strange rules of the Church, which is the real sorcery that rules the world? If there is one.

Haha I have been asked this before. You got tricked too. I don’t see a cross as a symbol of Christianity or Jesus Christ. I see a cross as sacred geometry of the human vessel. The song is about everyone cruifzing themselves. Always fighting about what’s right and wrong. The point is as soon as humans start taking responsibility for what they have done no progress will be made.

I found Gregg improved, it’s strangely varied and crooked, sometimes he reminds Danzig (for example in the titletrack); in which way do you make music and vocals work together? How do you write a song?

Thanks man! Danzig is one of my biggest influences. Most of time it starts with me singing and the title of the song. As soon as I get some lines written I automatically add guitar or it can go the other way. I believe all songs already exist, all we do is harness some power to pull them into our world.

I don’t like talking about politics, but since it is important I’d like to ask you: what do you think about Obama still keeping its leadership?

Here in Europe the crisis is ruining many nations, Italy is almost dying, and art loses out being sold out or used as a way to collect money from the ones who support music buying albums; the new generations are more and more misinformed even if full of informations, maybe culture is the new witch that bothers governments?

It’s hard for me to say. I live in a land where vintage tees are sold at gas stations. Music in our country is showed down your face. Things coming from the heart are rare.

Are you playing your music live? Is there a tour to support “Beg Upon The Light”?

We do as much as we can. Texas is one of the biggest states. So just hitting the major cities keeps us busy. We do plan to go out more in the future. It’s a process.

How did people receive your music? Here the number live shows is decreasing for many reasons, everyone seem not interested, not to talk about absurd prices and not so good locations.

We do very well. People seem to be ready to hear us. For people that don’t wanna pay to go to shows. If you don’t like the price on the ticket stay home and miss out. Our tickets are cheap. If you’re not giving don’t except to be receiving.

Is the plague of cover bands present in the U.S.A. too? And what about Pay To Play, band buying dates to play with big bands or good slots in festivals?

Tons of cover bands! I love it. But only if I like the original band. As far as paying for success that sounds the same as sleeping your way to the top. Their will always be people like that and they will never know true success. Everyone gets theirs.

Three dreams that you’d like to make true as Venomous Maximus?

Successful enough that we can do it for a living. Travel the entire world. Open for King Diamond and write the perfect song.

December 21st 2012, the apocalyptic day that made people go nuts with anything the media said about it, should be a “global change”,which song would be the good soundtrack for it?

“All Along The Watchtower” by Jimi Hendrix or a new song we have, “Fire In The Night”, no ones heard that yet.

Which were Venomous Maximus’ intentions for 2012? Did you make them all true? And now that 2013 is coming, which will be the new intentions?

A light question before the end, talking about witches, many times interpreted by beautiful ladies and always present in literature, which movies and books would you recommend about them? Maybe together with “Beg Upon The Light”.

The interview is finished, I recommend again our readers to check out Venomous Maximus’ music.